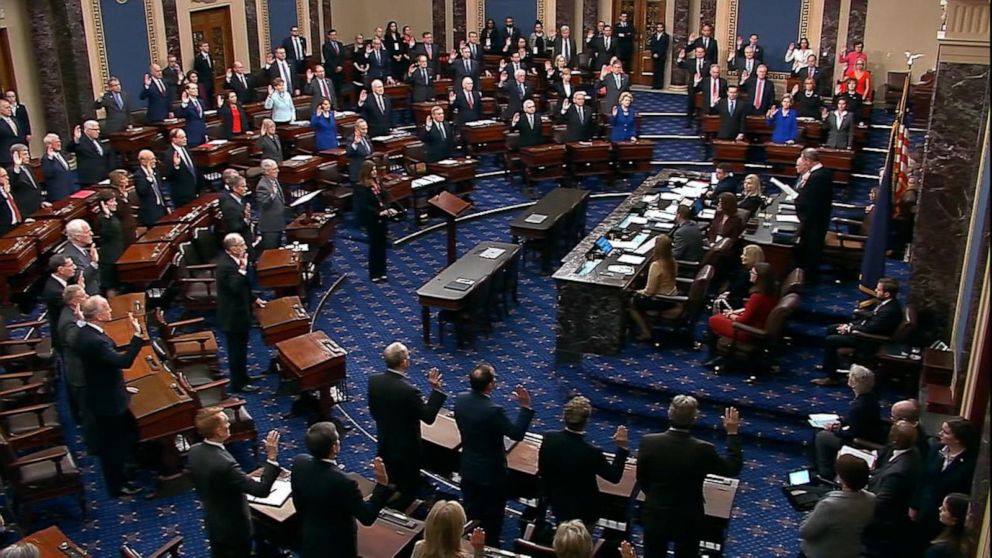 Key Republican senators are saying that President Donald Trump's request to Ukraine to launch an investigation to benefit himself politically was wrong, but did not amount to a significant enough offense to convict him on impeachment charges and remove him from office. Photo Credit: Senate TV

Key Republican senators are saying that President Donald Trump’s request to Ukraine to launch an investigation to benefit himself politically was wrong, but did not amount to a significant enough offense to convict him on impeachment charges and remove him from office.

Trump has for months described as “perfect” his request last July to Ukrainian President Volodymyr Zelenskiy to investigate one of Trump’s top 2020 challengers, former Vice President Joe Biden, and his son Hunter Biden’s work for a Ukrainian natural gas company.

But both Sen. Lamar Alexander of Tennessee and Sen. Joni Ernst of Iowa said in interviews broadcast Sunday that Trump erred in asking Zelenskiy to “do us a favor” to launch the investigations at the same time he was withholding $391 million in military aid Kyiv wanted to help fight pro-Russian separatists in eastern Ukraine.

Alexander, who provided a key vote late last week against the Democrats’ effort to call key Trump aides as witnesses in the president’s Senate impeachment trial, told NBC News’s “Meet the Press” show that it was “crossing the line” for Trump to ask for the Biden investigations.“

I think he shouldn’t have done it. I think it was wrong,” Alexander said.

“If the president was upset with what the Bidens were doing in Ukraine, he should’ve called the [U.S.] attorney general,” William Barr, Alexander said. Asked why Trump didn’t then, Alexander said, “Maybe he didn’t know to do it.”

But Alexander added, “I think what he did is a long way from treason, bribery, high crimes, and misdemeanors,” the U.S. Constitution threshold for an impeachable offense requiring removal from office. “I don’t think it’s the kind of inappropriate action that the framers would expect the Senate to substitute its judgment for the people in picking a president.”

He said voters in next November’s national election, when Trump is running for a second term in the White House, should decide his fate.

“You know, it struck me, really for the first time, early last week, that we’re not just being asked to remove the president from office,” Alexander said, “We’re saying, ‘Tell him he can’t run in the 2020 election ….”

As the heart of the case against Trump ended Friday, another Republican, Sen. Ben Sasse of Nebraska said, “Let me be clear, Lamar speaks for lots and lots of us.”

Ernst told CNN that Trump’s request to Ukraine for the politically tinged investigations was “not what I would have done. He maybe did it in the wrong manner.”

“He knows now he needs to go through the proper channels,” such as the U.S. Justice Department, if he sees the need for an overseas investigation.

Nonetheless, she concluded, “Does it come to the point of removing a president? I don’t think it does.”

With Republicans holding a 53-47 majority in the Senate, the Republican Trump is all but certain to be acquitted on two articles of impeachment, that he abused the power of the presidency by asking for the Ukrainian investigations and obstructed congressional efforts to review his Ukraine-related actions. A two-thirds vote is required to remove Trump from office and no Republican has called for his ouster.

Bolton says in a new book that Trump told him directly last August that he wanted the Biden investigations before he would release the military aid, a direct contradiction of Trump’s claim there was no reciprocal quid pro quo deal with Ukraine, the defense assistance in exchange for the Biden investigations. Trump denied the claim in the Bolton book, “The Room Where It Happened.”

Trump released the aid in September after a 55-day delay without Zelenskiy opening the Biden investigations, proof, Republicans say, he had no quid pro quo deal with Ukraine.

The 100 members of the Senate acting as jurors in the case will have a chance on Monday and Tuesday to give short speeches explaining their votes on Trump’s fate. The final vote on the two articles of impeachment is set for late Wednesday afternoon.

Trump has often ridiculed the impeachment effort against him, and did again over the weekend.

“The Radical Left, Do Nothing Democrats, don’t want justice when pushing the Impeachment Hoax,” Trump said on Twitter, “they only want to destabilize the Republican Party so they can do better in the 2020 election, & that includes the House & Senate. They are playing with the people by taking it this far!” (VOA News)