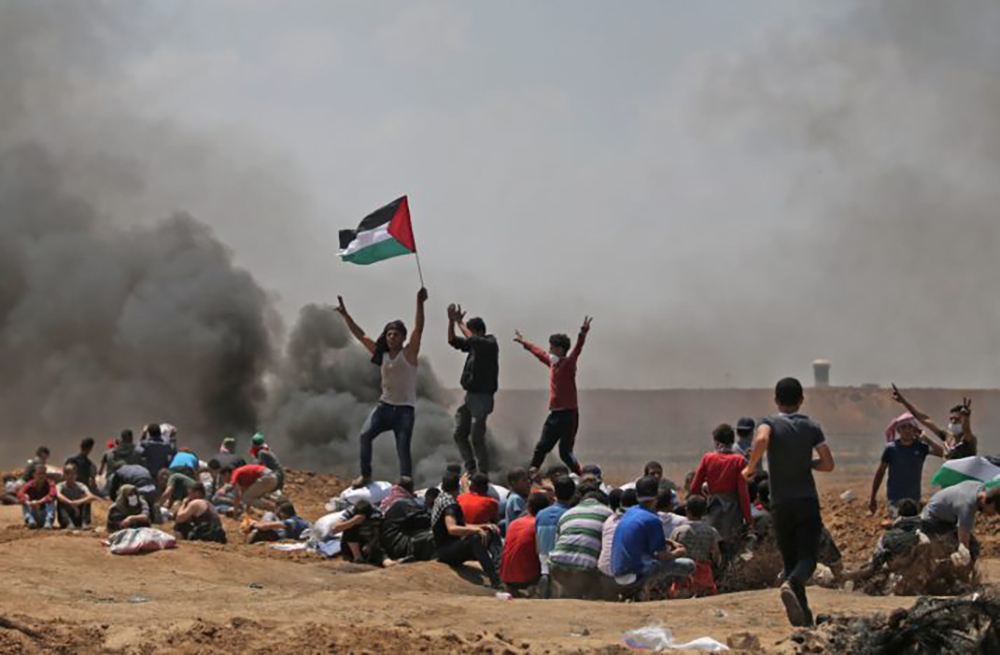 Palestinians wave their national flag as they demonstrate near the border between Israel and the Gaza Strip. Photo Credit: Getty Images

Here at The Jewish Voice, the current news stories both in Israel and here in the United States are scrutinized for detail, information, and most of all, accuracy. However, this is certainly not the case with certain media news outlets, as their true allegiances are not with delivering the truth to the public, but rather, with selling their own twisted versions of the truth. Dubbed ‘fake news’, this epidemic of reporters publishing lies about the state of Israel, and/or about the Jewish nation, has been spiraling out of control for quite some time now.

In one famous example, President Trump once accused CNN of manipulating a video that showed massive crowds of Palestinians forming to oppose the executive decision to make Jerusalem the home for the U.S. Embassy in Israel.

The NY Times said that “thousands of Palestinian protesters confronted Israeli soldiers at the Gaza border,” and “scores of protesters were said to have been wounded, many by rubber-tipped bullets.” CNN’s Arwa Damon contributed from Ramallah, noting that there were dozens of protesters attacking Israeli soldiers, but then contradicted herself by saying, “the number of Palestinians who have taken to the streets remains, relatively speaking, low.”

What the real-news truth is, instead of the fake-news truths, is that there was a muted response; that rather than 10,000 people getting involved in the protests, only 58 had died and 2,700 were injured. Albeit these are slightly-large numbers, they are minimal in comparison to the ‘10,000’ inputted by the NY Times.

So what is the truth? That’s where The Jewish Voice comes in. Stationed in America, yet working the Israel angle, The Jewish Voice is the middle-man that the Jewish nation needs in order to be properly represented in the eyes of those who don’t know better. By exposing the corrupted truths that American news outlets produce daily, and instead replacing them with the real news derived from the actual-trustworthy sources, The Jewish Voice guarantees that the blurry line between real and fake is clarified once and for all.