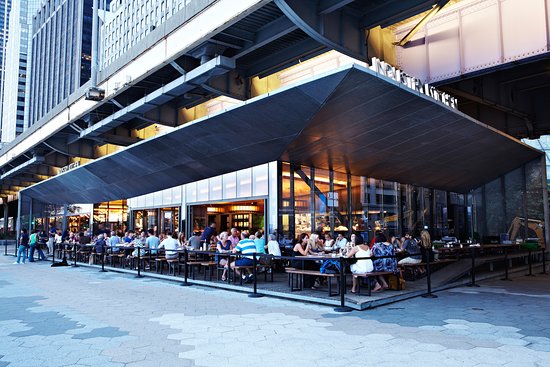 NYC should begin the process of eliminating the unjust Commercial Rent Tax (CRT), which is effectively a 3.9% surcharge that only businesses located south of 96th Street in Manhattan pay on their annual rent when it exceeds a given threshold. Photo Credit: TripAdvisor.com

When Democratic New York City Mayor Bill de Blasio said last week in his State of the City speech that he wanted to “save our small businesses,” most people laughed. But not restaurant operators. They hope the mayor will, for once, be as good as his word, and so they’ve proffered some suggestions.

“Government officials always ask us, ‘How can we support small businesses?'” noted Andrew Rigie, executive director of the New York City Hospitality Alliance. “This is a road map.”

The group released its report with suggestions – recommendations on how to actually help its 25,000 members. Here’s some of what it says:

* Cut the Red Tape & Reduce Fines 100: Review all laws and regulations governing restaurants and nightlife establishments to determine which are antiquated, duplicative or inappropriate. We should then amend or repeal the identified mandates with the purpose of streamlining the permit and licensing process and enhancing the experience businesses have when interacting with government. This should include a requirement that inspectors educate businesses first, by explaining why a violation exists and how to correct and prevent it. The goal should be to reduce fines, increase education and compliance, and
provide a warning or cure period before a fine is levied for any violations that do not pose an imminent hazard to the public.

* Taxes (Miscellaneous): The tax code is used to support and incentivize economic and pro-growth activity. Benefits such as the Excelsior Jobs Tax Credit should be extended to employers in the hospitality industry. Restaurants that purchase certain amounts of product from New York farmers and/or food & beverage manufacturers should be offered incentives to encourage NYS commerce and jobs. The City and State Finance Departments should permit the FICA Tip Tax Credit to be an allowable subtraction from that business’ taxable income. Eliminate the unfair liquor excise tax imposed by the City on all local liquor license holders.

* Commercial Rent Tax & Property Tax: NYC should begin the process of eliminating the unjust Commercial Rent Tax (CRT), which is effectively a 3.9% surcharge that only businesses located south of 96th Street in Manhattan pay on their annual rent when it exceeds a given threshold. This tax is discriminatory as it only applies to businesses in a certain area of Manhattan with the highest rents, and is calculated on the rent, not income. CRT has already been repealed citywide, except in this one geographic area. Most
commercial tenants pay a portion of their landlord’s property taxes, in addition to their rent. These taxes pose a significant financial burden on small businesses. Provide small businesses with a tax credit against a portion of the property taxes they pay.