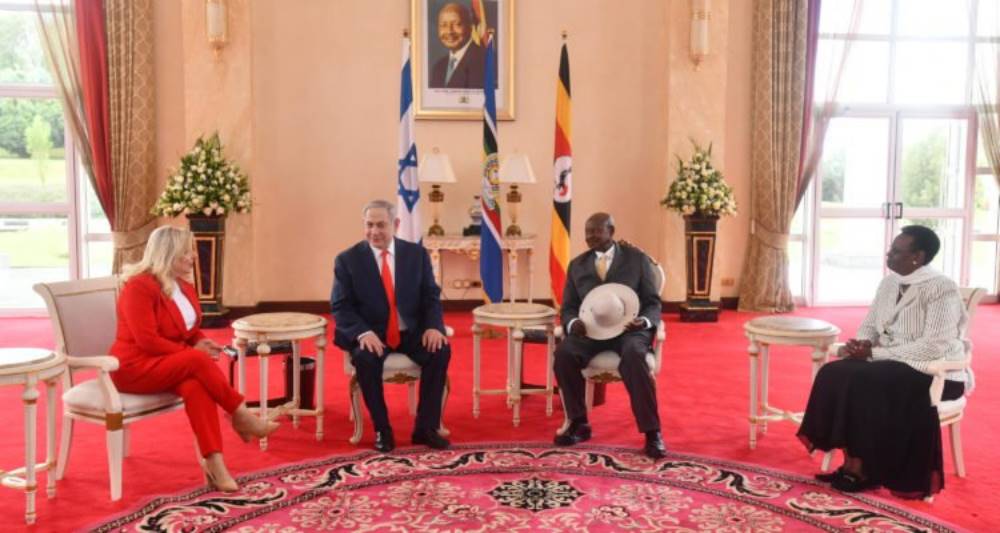 Netanyahu announced during his visit to Uganda that he hopes to have good news for Israel by the end of the day.

On a one-day visit to Uganda, Prime Minister Benjamin Netanyahu and his wife Sara were welcomed by President Yoweri Museveni and his wife, Education Minister Janet Museveni, at the Entebbe Presidential Residence.

Earlier, the Israeli leader and his wife were met at the airport by Prime Minister Ruhakana Rugunda and his wife Jocelyn.

Netanyahu wrote in the guestbook, “To President Yoweri Museveni and First Lady Janet, Many thanks for your incomparable hospitality and friendship – to us and to the State of Israel. We are deeply moved and deeply grateful.”

The prime minister has made improving ties with African nations a priority over the last few years.

“Israel is making a big return to Africa, and Africa has already returned to Israel. These are important ties politically, economically and in terms of security,” Netanyahu said before he headed to Uganda, adding that he hopes to have good news for the State of Israel by the end of the day, referring to the possible opening of Uganda’s embassy in Jerusalem.

During the meeting, it was agreed to start cooperation that will normalize relations between the two countries.

“Prime Minister Netanyahu believes that Sudan is moving in a new and positive direction and he has even expressed his view to the US Secretary of State,” the Prime Minister’s Office stated.

Burhan reportedly expressed his desire that his state go through a process of modernization by removing it from isolation and placing it on the world map.