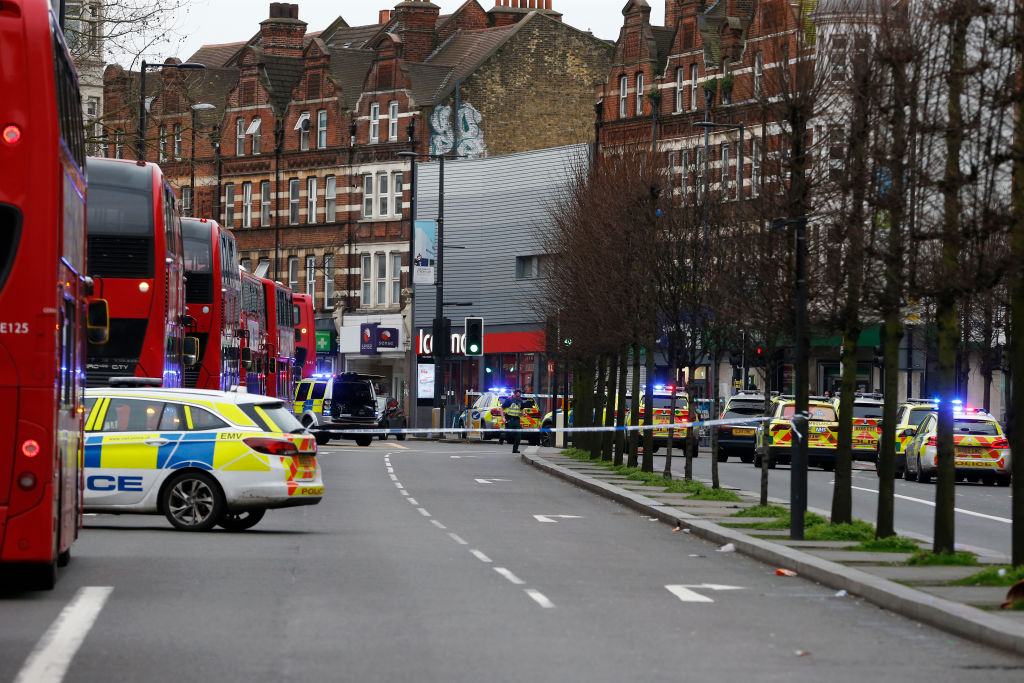 A male victim, who suffered life-threatening wounds is now out of danger. A woman who was stabbed has been released from the hospital. A third person was slightly injured by flying glass when police shot the suspect.

Prime Minister Boris Johnson says his thoughts are with the injured as he thanked police and emergency workers. Johnson also said that in light of this attack and one in December, the government would introduce “fundamental changes” to how people convicted of terrorism are treated.

London Mayor Sadiq Khan said “Terrorists seek to divide us and to destroy our way of life. Here in London, we will never let them succeed.”

Witnesses report seeing police chasing a suspect down the neighborhood’s main shopping district, yelling for him to stop. They opened fire and shot him three times when he ignored them. Police determined that the explosive device he wore was a fake.

Police have not yet publicly identified him or spoke of an exact motive other than saying it was terrorism.

In a somewhat related development, AFP reported that UK Prime Minister Boris Johnson will on Monday outline a hardline stance in post-Brexit negotiations with the European Union, arguing Britain does not need to follow various EU rules to strike a trade deal.

In a keynote speech detailing his vision for the country’s future, days after its historic departure from the bloc following nearly half a century of membership, Johnson is to say he will seek a “pragmatic agreement,” as was reported by AFP.

The British premier will note London has been told in earlier divorce talks with Brussels that it has the option of an ambitious trade deal, “which opens up markets and avoids the full panoply of EU regulation.”

“There is no need for a free trade agreement to involve accepting EU rules on competition policy, subsidies, social protection, the environment, or anything similar,” Johnson is set to say, according to excerpts of the address released by his Downing Street office and was reported by AFP.

“The UK will maintain the highest standards in these areas — better, in many respects, than those of the EU — without the compulsion of a treaty and it is vital to stress this now,” he will add.

Johnson also insists that if that type of agreement, similar to one the EU recently struck with Canada, is not possible then Britain would opt for a less comprehensive trade deal, according to an AFP report.

“The choice is emphatically not ‘deal or no-deal,'” he will say.

But in a sign of the potentially fraught nature of the high-stakes talks, Irish Prime Minister Leo Varadkar urged London on Sunday to “tone down” what he called “nationalistic rhetoric”.

Britain should avoid repeating the past mistake of insisting on “rigid red lines” which “makes it hard to come to an agreement,” he said.

Late on Friday, Britain ended almost half a century of often reluctant membership of the European Union, an organization set up to forge unity among nations after the horrors of World War II.

Upon leaving, the UK immediately entered an 11-month transition period agreed as part of the divorce, during which there will be little change in practical terms.

Britons will be able to work in the EU and trade freely — and vice versa — until Dec. 31, although the UK will no longer be represented in the bloc’s institutions.

Legally however, Britain is out, and attention is now turning to what may prove to be grueling talks with Brussels this year to hammer out all aspects of the future partnership.

Johnson, a polarizing figure accused of glossing over the complexity of leaving the EU, is in a rush to seal an agreement. (VOA News)