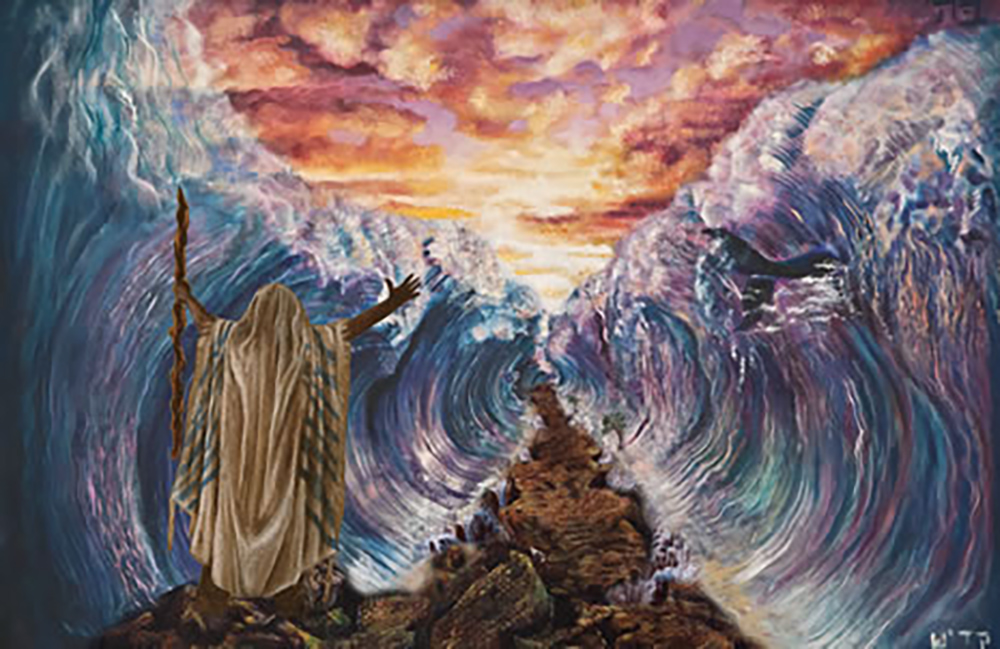 Krias Yam Suf was in fact a necessary step before the Jews could receive the Torah, but their reasoning is quite enigmatic. They emphasize the need for the Jewish people to pass through the waters of the Yam Suf in order to be ready and capable of receiving the Torah. The question we then need to ask is: what is the significance of water in regard to the Jewish People's journey from Mitzrayim to Har Sinai?

As we begin Parshas Beshalach, Klal Yisrael has just witnessed the miracles of leaving Mitzrayim and are now traveling towards Har Sinai, ready to receive the Torah. In between, however, lies a cosmic event: Krias Yam Suf, the splitting of the sea. One can ask, though, why Krias Yam Suf was even necessary. Why couldn’t the Jews go from the spiritual high of the makkos (plagues) and Yetzias Mitzrayim (the exodus) straight to Matan Torah? Why did they first have to pass through the sea? This question is strengthened by the commentaries who point out that this journey through the Yam Suf was apparently pointless. The Midrash explains that Klal Yisrael exited on the very same side of the Yam Suf that they entered! If Hashem simply wanted to destroy the Egyptians, there are far easier ways to accomplish this. What was the purpose of such a journey?

Commentaries explain that that Krias Yam Suf was in fact a necessary step before the Jews could receive the Torah, but their reasoning is quite enigmatic. They emphasize the need for the Jewish people to pass through the waters of the Yam Suf in order to be ready and capable of receiving the Torah. The question we then need to ask is: what is the significance of water in regard to the Jewish People’s journey from Mitzrayim to Har Sinai?

Yetzias Mitzrayim was not merely a physical process, whereby the Jewish people departed from the land of Egypt and traveled towards a different location. It was a spiritual metamorphosis, an existential transition, the birth of a people. Prior to leaving Mitzrayim, Bnei Yisrael were a collective of people, but upon leaving, we became a single nation, a single people, and unified whole.

Water as the Medium of Creation

The Maharal explains that the fundamental nature of water is that it is formless. Water has no form of its own, rather it takes on the shape of its container. (It is pure chomer, without any tzurah.) The ocean is completely shapeless, and unlike dry land which has paved paths, it has no pathways or landmarks. This characteristic of water is indicative of its essence. Water represents the initial stage in every creative process. Before something becomes expressed and takes on form, it remains in a formless and amorphous state. Through the creative process, physical form emerges from this amorphous beginning. This is why the Torah states that during the original creation of the world, there was initially only water. Only afterwards did dry land emerge from the water.

This theme of water as the medium of creation is present again in Parshas Noach, when the mabul covered the world with water. The deep idea behind the flood is that Hashem was not destroying the world, He was recreating it. The Dor Ha’Mabul became so corrupted that Hashem decided to start over again with Noach alone. Hashem therefore immersed the world in water, so that it could go back into its primordial state of formlessness and void. Only once it went back into its original state could the dry land emerge once again from the waters, recreated. Only once the dry land emerged, and the world was born once again, did Noach leave the teivah.

This deep understanding of water also informs us of why each of us is surrounded by amniotic fluid while in our mother’s womb. Just as the creation of the physical world emerged from formless water, so too, each of us have our own creation story, and therefore emerge from our own waters. Our birth is like the birth of a new world (Sanhedrin 37a). When we are in our mother’s womb, the malach teaches us kol ha’Torah kulah (Niddah 30b). As the Vilna Gaon explains, this refers to the deepest realms of Torah, a transcendent Torah that is beyond this world, a Torah that is beyond the confines of shape and time. This Torah is the very root of reality, and you understood every aspect of it clearly. Not only were you shown this level of Torah, but you were also learning your specific share of Torah- you were being shown your unique purpose in the world, and how your unique role fits into the larger scheme of the human story as a whole. You were given a taste of your own perfection, of what you could, should, and hopefully will become. And from this transcendent realm, you were birthed into the physical world, emerging from these formless waters, with the mission to give form to everything you were shown in the womb, in your primordial and perfected state.

The Maharal goes on to explain that this same theme is the reason why the Jewish people had to immerse themselves into the waters of the Yam Suf between leaving Mitzrayim and receiving the Torah. Yetzias Mitzrayim set th stage for the creation and birth of the Jewish people, and when they immersed in the waters of the Yam Suf they went through the transformative process of being born as a nation. Thus, just as the creation and recreation of the world were accomplished through water, the Jewish People as a nation had to be formed through water as well. As the Midrash explains, the splitting of the Yam Suf is comparable to a pregnant woman’s water breaking. Klal Yisrael entered the Yam Suf as individuals, but emerged reborn, as a nation. Let us now delve a bit deeper into the birth of the Jewish people and show how Yetzias Mitzrayim encapsulates this principle. 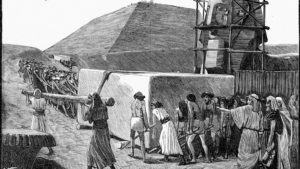 Prior to leaving Mitzrayim, Bnei Yisrael were a collective of people, but upon leaving, we became a single nation, a single people, and unified whole.

The very first mitzvah given to the Jewish people upon leaving Egypt was the commandment to declare the new month, “Ha’chodesh hazeh lachem rosh chadashim” (Shemos 12:2). Why is this so? This seems like a secondary concept, not nearly as important as the mitzvos of shabbos, bris milah, and many other such essential mitzvos. But the answer is profound.

Upon leaving Egypt, the Jewish people were experiencing their very own birth, their inception as a nation. In doing so, they had to recreate themselves, shedding their slave mentality, and embracing their transcendent purpose as they headed towards Matan Torah. To do so, they needed to receive the koach (power) of newness and control over time. The Hebrew word for month, chodesh, also spells chadash, “new.” A slave has no power over time, no responsibility, no sense of purpose. As part of our birth, we were given a new identity, we were given control over time, and were given a mission to head towards Har Sinai, where we would receive our ultimate purpose by receiving the Torah.

This idea- the birth of the Jewish People- sheds light on some of the strange halachos of the Korban Pesach, the sacrificial lamb that Klal Yisrael ate on the night before leaving Egypt. This lamb must be to be one year old, roasted, not cut up or broken, must be eaten within a single house, and in a chabura (group of people).

The Maharal explains that each of these halachos symbolizes a single concept: the creation of the oneness of Klal Yisrael. On the first night of Pesach, we embrace and embody this principle to the utmost of our capability. We eat a one year old, reflecting our oneness. It must be roasted, not cooked or boiled, because only by roasting it does the meat remain one, whereby cooking and boiling causes the meat fall apart into separate pieces. It must be roasted whole and mustn’t be cut up at all. One can’t break a single bone, in order to maintain the absolute oneness of the lamb. It has to be eaten in one home and it must be eaten as a chabura to bring family and friends together into a single unified group, reflecting the oneness of Klal Yisrael, whereby each of the individuals are part of a whole greater than themselves.

It should be no surprise that the Gemara brings down an opinion stating that whenever a convert enters into the Jewish nation, he should bring a Korban Pesach, regardless of the time of year. The meaning is profound: the Korban Pesach is the means of joining the oneness of Klal Yisrael, as this is what we did in Mitzrayim when we originally became the Jewish People.

Now that we have developed the purpose of water and its significance within Krias Yam Suf, we can use this principle to shed light onto the unique mitzvah of entering the mikvah. When you immerse yourself in the water, you return to a pure and formless state; the original state of perfection you possessed in your mother’s womb. You are going back to your root, your higher self, your original source. In doing so, you “wash” off your spiritual impurity, reattaching yourself to your pure, root self. When you emerge, you emerge reborn, recreated, as if taking on form and shape for the first time. It is like the dry land emerging from the primordial waters.

Before the Jewish people could receive the Torah, they had to be reborn, recreated with a new identity both as individuals and as a nation. Next week, when we read about Matan Torah, we need to realize that we aren’t just remembering what happened thousands of years ago. We are about to re-experience this transformative event ourselves! Yet, before we receive the Torah, we must make sure we go through our very own Krias Yam Suf, our very own rebirth.

Every day, we get to choose who we are, what we believe in, and how we are going to live our lives. Each morning we get to create our identity. We don’t have to continue making the same mistakes again and again. Each day, we can restart anew. As Avraham said, “anochi afar v’efer”- I am but dirt and ashes. Most people understand this to mean that Avraham was a humble man. However, there is a deeper explanation as well. Ashes represent an elemental breakdown of something. Dirt represents the starting point of growth, the place where seeds are planted. Avraham was saying that every day he would “ash” himself, breaking himself down into his elemental and root form, and then plant himself anew in a field of dirt. In other words, Avraham would recreate himself every single day. He never continued living on the same way simply because he had done so yesterday. Each and every day, he looked deep within himself, broke himself down, and recreated himself anew. May we all be inspired to embark on a journey of genuine “afar vi’efer”, finding excitement and meaning in our constant growth and internal recreation. This year, as we read about Krias Yam Suf, may we each be inspired to undergo a genuine rebirth in our own personal lives, create an even more empowering identity, and prepare ourselves to experience a true Matan Torah.