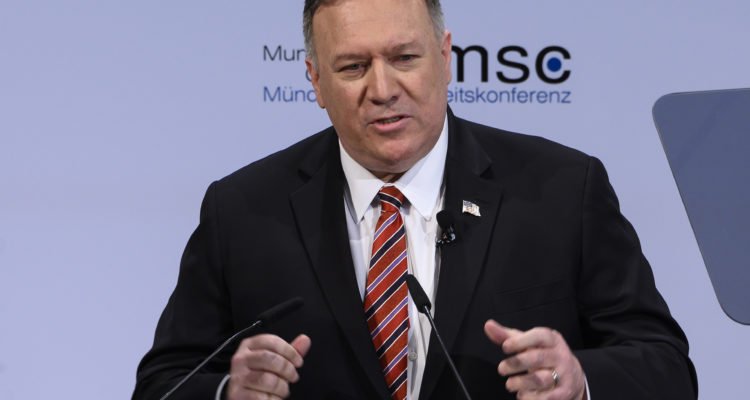 “When I talk to my counterparts here in Europe, everybody gets it,” said U.S. Secretary of State Mike Pompeo at the Munich Security Conference on Saturday.

Secretary of State Mike Pompeo said at the Munich Security Conference on Saturday that while there may be disagreements on what to do with the Iran nuclear deal, “When I talk to my counterparts here in Europe, everybody gets it.”

“Everyone understands that these are folks who continue to build out their nuclear program,” Pompeo said. “So there’s a common understanding about the threat; we have tactical differences on how to proceed.”

The Iran nuclear deal, known as the Joint Comprehensive Plan of Action or JCPOA, promised Iran economic incentives in exchange for curbs on its nuclear program. It was intended to prevent Tehran from developing a nuclear bomb, which Iran insists it does not want to do, despite evidence presented by Israel that disproves these contentions.

Since the U.S. withdrawal, the deal’s other signatories – Germany, France, Britain, Russia and China – have unsuccessfully struggled to come up with ways to offset the effects of the new American sanctions.

Washington has pressured the other countries to abandon the deal entirely.

In recent months, Iran has steadily violated the limitations the deal placed on the amount of enriched uranium and heavy water it can stockpile, the number and type of centrifuges it can operate, and the purity of the uranium it enriches.

The so-called “breakout” time it would take for Iran to build a bomb decreases with every step.

Iran also continues to be the driving force behind Islamic terror groups destabilizing the region, including Hamas, Palestinian Islamic Jihad, and Hezbollah.

Iranian foreign minister Javad Zarif rejected Trump’s suggestion of negotiating a new deal, saying the one negotiated during the Obama administration was the only vehicle for talks on Iran’s nuclear program.

“There is no point in talking over something you already talked about. You don’t buy a horse twice,” he said.