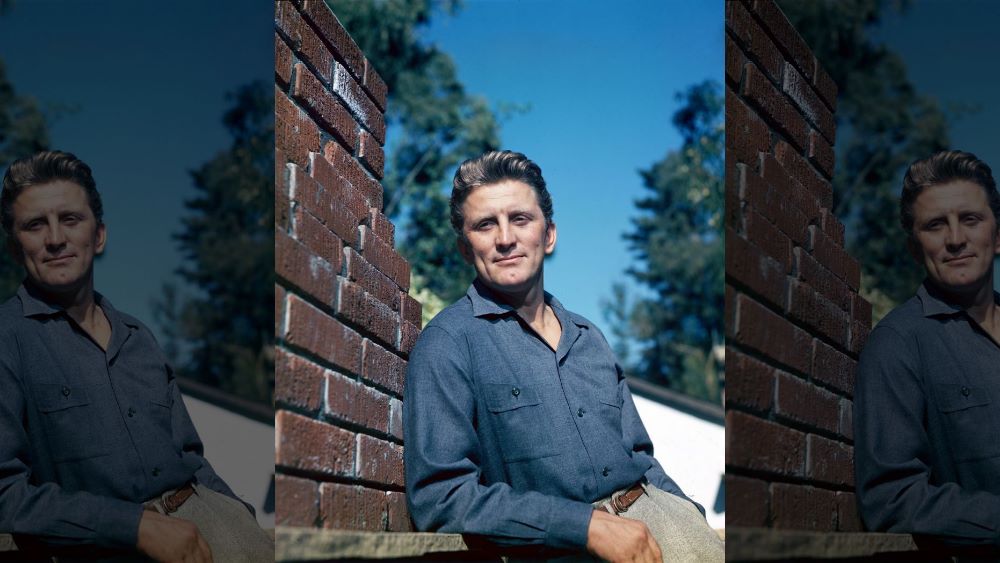 Kirk Douglas, a star who personified the golden age of Hollywood is seen here in the 1950s. (Silver Screen Collection/Getty Images)

Kirk Douglas, one of the most famous American leading men of the mid-20th century remembered for his dimpled chin, chiseled features, and virile Hollywood roles, died Wednesday at the age of 103, his family announced, according to a Fox News report.

“It is with tremendous sadness that my brothers and I announce that Kirk Douglas left us today at the age of 103,” Kirk’s son, Michael Douglas, wrote in a statement shared to social media. “To the world he was a legend, an actor from the golden age of movies who lived well into his golden years, a humanitarian whose commitment to justice and the causes he believed in set a standard for all of us to aspire to,” the younger Douglas said, as was reported by Fox News.

“But to me and my brothers Joel and Peter he was simply Dad, to Catherine, a wonderful father-in-law, to his grandchildren and great grandchild their loving grandfather, and to his wife Anne, a wonderful husband,” he added.

Michael concluded his post by writing: “Kirk’s life was well lived, and he leaves a legacy in film that will endure for generations to come, and a history as a renowned philanthropist who worked to aid the public and bring peace to the planet. Let me end with the words I told him on his last birthday and which will always remain true. Dad- I love you so much and I am so proud to be your son.”

The statement did not indicate exactly how or where he died.

Douglas starred in such classic films as “Spartacus” “The Bold and the Beautiful” “Twenty Thousand Leagues Under the Sea” “Lust for Life” and “Seven Days in May’” just to name a few. Douglas has 92 film credits to his name throughout his long and productive career as a film star. His debut came in the late 1940s when he played opposite Barbra Stanwyck in “The Strange Love of Martha Ivers”

However, his big break came in 1949 when he starred as an ambitious boxer in the film noir classic “Champion,” which earned him his first of three Oscar nominations for Best Actor, as was reported by Fox News. The role cemented Douglas’ steely image, and with his distinctive raspy voice and piercing eyes he continued to take on intense, often cocky, characters in his films.

He played a ruthless Hollywood producer in “The Bad and Beautiful” (1952) and portrayed Vincent Van Gogh in “Lust for Life” (1956).

Douglas’ decision to give screen credit to “Spartacus'” blacklisted screenwriter Dalton Trumbo — one of the “Hollywood Ten” who testified before the House Un-American Activities Committee in 1947 — helped bring an end to entertainment industry McCarthyism.

Born as Issur Danielovitch Demsky on December 9, 1916, Douglas was the son of Bryna “Bertha” (née Sanglel; 1884–1958) and Herschel “Harry” Danielovitch (c. 1884–1950] His parents were Jewish immigrants from Chavusy, Mogilev Region, in the Russian Empire (present-day Belarus), and the family spoke Yiddish at home.

His father’s brother, who immigrated earlier, used the surname Demsky, which Douglas’s family adopted in the United States. Douglas grew up as Izzy Demsky and legally changed his name to Kirk Douglas before entering the United States Navy during World War II.

In his 1988 autobiography, The Ragman’s Son, Douglas notes the hardships that he, along with six sisters and his parents, endured during their early years in Amsterdam, New York.

Douglas’s acting talents were noticed at the American Academy of Dramatic Arts in New York City, which gave him a special scholarship. One of his classmates was Betty Joan Perske (later known as Lauren Bacall), who would play an important role in launching his film career. Bacall wrote that she “had a wild crush on Kirk,” and they dated casually. Another classmate, and a friend of Bacall’s, was aspiring actress Diana Dill, who would later become Douglas’s first wife.

During their time together, Bacall learned Douglas had no money, and that he once spent the night in jail since he had no place to sleep. She once gave him her uncle’s old coat to keep warm: “I thought he must be frozen in the winter . … He was thrilled and grateful.” Sometimes, just to see him, she would drag a friend or her mother to the restaurant where he worked as a busboy and waiter. He told her his dream was to someday bring his family to New York to see him on stage.

Douglas is survived by his wife of 65 years (married May 29, 1954) Anne Buydens, their son Peter Douglas, two sons from his first marriage — Michael and Joel Douglas — and seven grandchildren.