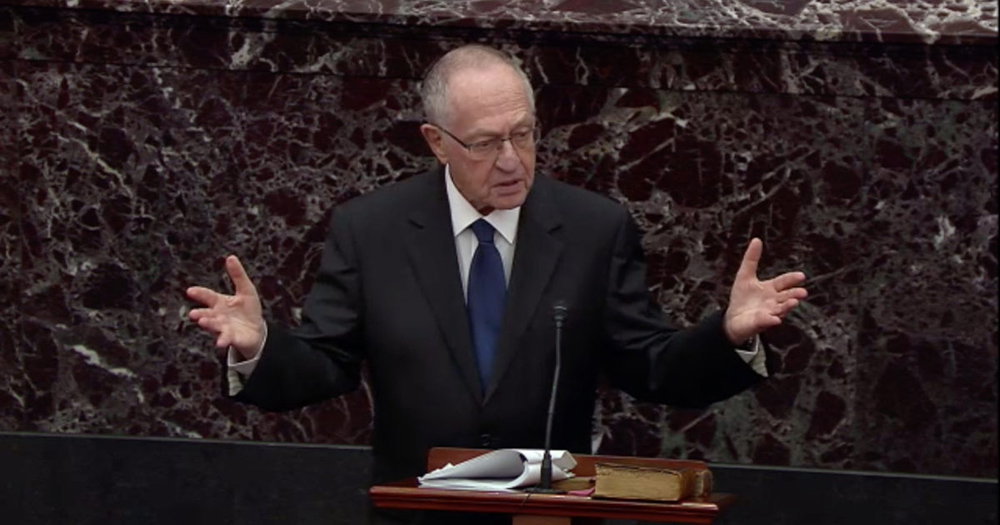 The renowned civil libertarian lawyer who once defended O.J Simpson and assisted Trump during the impeachment hearings, Alan Dershowitz, appeared on radio station 970 AM The Answer’s show “Cat’s Roundtable” hosted by John Catsimatidis and blasted Chuck Schumer and Nancy Pelosi.

“I think they need new leadership. I think Schumer and Pelosi have to go. Schumer, because of his history of lying. You know, Pelosi actually called for me to be disbarred … because I had persuaded some senators”, Dershowitz said on the program.

“I think the Dems need new leaders if they have any chance of returning to power,” Dershowitz said in an interview that aired Sunday morning on “The Cats Roundtable”, The N.Y Post highlighted.

When Dershowitz joined Trump’s legal team, he stated his motivation was that he was opposed to the impeachment saying, “I’m there to try to defend the integrity of the constitution – that benefits President Trump in this case.” Dershowitz was not involved in the Trump case other than making arguments relating to the constitutionality of the impeachment, NBC news reported.

Dershowitz assisting in Trump’s legal proceedings is quite revealing as to the illegitimacy of the disastrous impeachment trial. The famous lawyer is not only is a Democrat and Hillary Clinton supporter, he is very liberal and has rigorously criticized Trump repeatedly.

Comparing Trump unfavorably to Hillary Clinton in October 2016, Dershowitz remarked, “I think there’s no comparison between who has engaged in more corruption and who is more likely to continue that if elected President of the United States, CNN reported.

He was very vocal about the way Trump handled the Charlottesville incident with Neo-Nazi’s fighting Antifa communists and the death and chaos than ensued in 2017.

He continues to be a dedicated Democrat even after helping President Trump. During the 2020 Democratic Party primaries, Dershowitz endorsed Joe Biden. He said: “I’m a strong supporter of Joe Biden. I like Joe Biden. I’ve liked him for a long time, and I could enthusiastically support Joe Biden.” He criticized Bernie Sanders, saying: “I don’t think under any circumstances I could vote for a man who went to England and campaigned for a bigot and anti-Semite like Jeremy Corbyn, Newsweek reported.

During the Senate trial, Dershowitz argued that if the president takes an action to get him re-elected, something he believes is in the nation’s interest, he cannot be impeached for it, The New York Post explained.