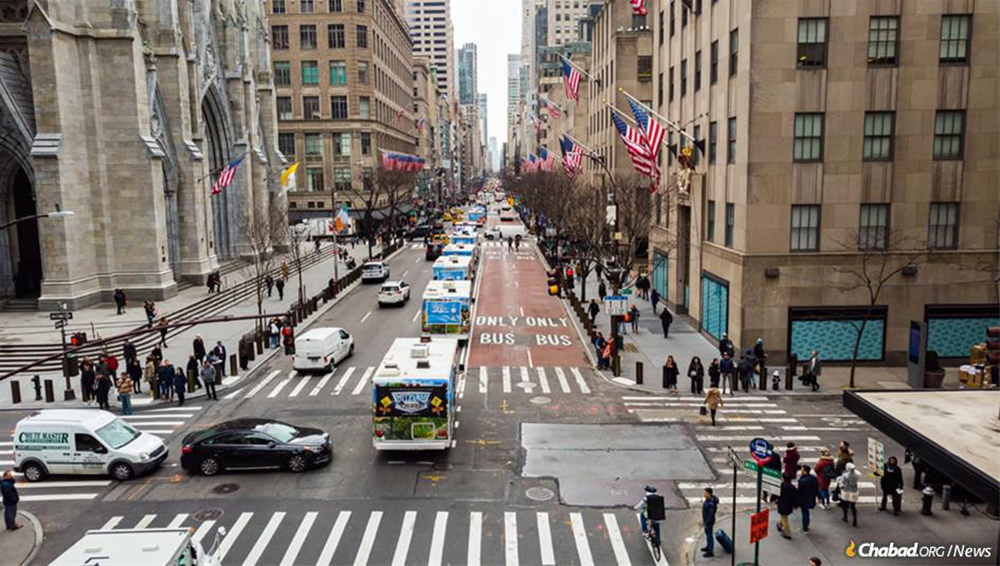 A mitzvah tank procession on Fifth Avenue in Manhattan was one of many activities to mark 70 years since the Rebbe—Rabbi Menachem M. Schneerson, of righteous memory—became leader of the Chabad-Lubavitch movement.

From the Old City of Safed to the contemporary metropolis of Toronto and in Jewish communities around the world, tens of thousands gathered to mark 70 years since the Rebbe—Rabbi Menachem M. Schneerson, of righteous memory—became leader of the Chabad-Lubavitch movement. Building upon the foundation laid by his father-in-law and predecessor the Sixth Rebbe, Rabbi Yosef Yitzchak Schneersohn, of righteous memory—who passed away on the 10th of Shevat, in 1950—the Rebbe would go on to engineer a global Jewish renaissance in the aftermath of the Holocaust. 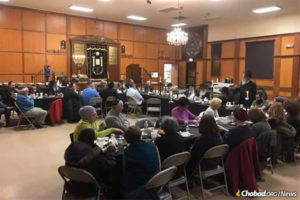 Sharing wisdom from the Rebbe in Worcester, Mass.

Far from focusing only on the revival of his own flock of Chassidim or even the Jewish people, the Rebbe turned his gaze outward to the world at large, expending thousands of hours meeting and corresponding with people from all walks of life, among them rabbis, statesmen and laypeople, Jews and non-Jews. In the estimated 11,000 hours that the Rebbe spent teaching at public gatherings, he would expound on a diverse range of topics, from in-depth analysis of Talmudic passages to the profound elucidation of esoteric parts of Torah. Hundreds of volumes of the Rebbe’s teachings have already been published, with still more to come.

Alongside this vast Torah scholarship he would also passionately address the state of the broader society—speaking on everything from criminal justice reform to social safety nets to the fundamental need for moral and ethical education for all. Twenty-five years after his passing, the Rebbe’s moral and ethical teachings for the world continue to serve as a guiding force for a generation of Jews and non-Jews seeking to change the world for the better. 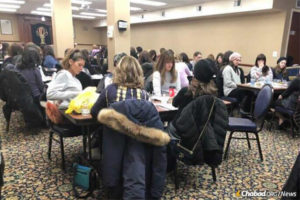 Events for women are taking place around the world.

Commonly referred to as Yud Shevat (the 10th day of the Hebrew month of Shevat)—and corresponding this year to Tuesday, Feb 4, and Wednesday, Feb. 5—the day has become a time of introspection and inspiration for those touched by the Rebbe’s vision for humanity. The Rebbe formally accepted leadership of the Chabad movement on the first anniversary of his father-in-law’s passing, delivering the groundbreaking discourse, Basi Legani, or, “I have come to My garden.” Expounding upon themes found in his predecessor’s discourse by the same name, the Rebbe laid out the mission of a new generation: to reveal the G dliness found within the material world and transform it into a garden for G d.

Over the next four decades, the Rebbe would continue the tradition of expounding upon this theme. These discourses, alongside the original one delivered by the Sixth Rebbe, are traditionally studied on Yud Shevat and in the run-up to the day. 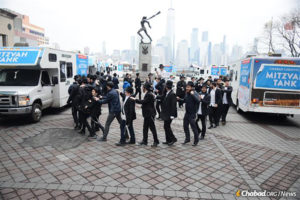 Dancing on the streets of New Jersey

Communities also often invite rabbis or notable individuals to lead farbrengens, or Chassidic gatherings, to mark the date, especially an anniversary as momentous as the 70th. Among many others, Rabbi Moshe Feller, regional director of Chabad of the Upper Midwest Region based in Minnesota, headlined a massive gathering in Morristown, N.J., while Rabbi Berel Lazar, Russia’s chief rabbi and head Chabad emissary, joined hundreds in London. Amid the snowcapped mountains of Lucerne, Chabad of Central Switzerland held a lunch-and-learn event in honor of the day with Judge Ekyakim Rubinstein, a former vice president of the Supreme Court and Attorney General of Israel, who shared recollections of the Rebbe’s profound influence on his own life.

A soulful gathering at the Tzemach Tzedek Synagogue in Safed in northern Israel attracted English-speaking residents and visitors from around the world, while a second program in Hebrew followed, drawing members of multiple Chassidic groups, including the Sanz, Lelov and Breslov communities of the mystical city. 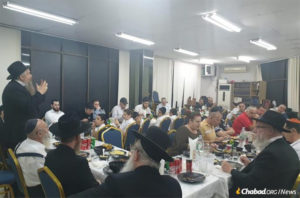 “We see that in recent times, interest has been piqued in Chabad Chassidut and the Rebbe’s teachings by other Chassidim, as well as from English-speaking immigrants and visitors to our city from all affiliations and backgrounds,” Rabbi Gavriel Marzel, director of the synagogue and the nearby Old City of Safed Chabad-Lubavitch center, told Chabad.org. “They learn in their own spheres, but when looking for new, living and deep insights, they want to study the Rebbe’s teachings.”

And across the globe, the UJA Federation of Greater Toronto helped to promote an event titled “70 Years of the Rebbe’s Leadership,” which attracted people from across Toronto’s vibrant Jewish community. It featured discussions about the Rebbe’s impact on the world and included teachings about some of the niggunim, deeply spiritual melodies, that were taught by the Rebbe. 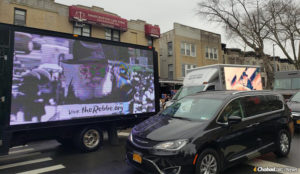 In New York City, 70 “mitzvah tanks” departed from 770 Eastern Parkway, the Chabad movement’s Brooklyn, N.Y.-based headquarters, for Manhattan. The vehicles were staffed by an international team of students, from Australia to Russia, with eight languages spoken between them.

Events exclusively for women have been taking place in U.S. communities such as Houston, Detroit, St. Paul, Los Angeles, New Haven and Las Vegas, in and cities across Europe, Israel and Asia. More than 2,000 participants have viewed a video lecture by Rivkah Slonim, co-director of the Rohr Chabad Center for Jewish Life at Binghamton University, about the Rebbe’s ongoing influence on Jewish women.

Throughout the night and day, many thousands of people, Jews and non-Jews, will be visiting the Ohel, in the Cambria Heights neighborhood of Queens, N.Y., the resting place of both Rebbes. In addition to petitions for blessing written at the site, letters from around the world were sent via email, fax and were delivered by others, asking for the Rebbe’s guidance and intervention on High, in the age-old tradition of written prayer petitions at our holiest sites. 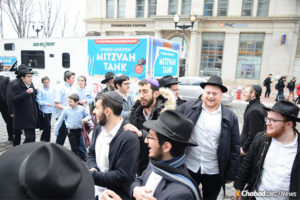 Yeshivah students departed from the Rabbinical College of America in Morristown, N.J., with a fleet of 12 RVs, accompanied by 70 rabbinical students and 35 elementary-school students from the college’s day school.

Starting out from Lubavitch World Headquarters at 770 Eastern Parkway in Brooklyn, a parade of 70 “mitzvah tanks”—RVs specially outfitted to bring Judaism to the streets—headed into the heart of Manhattan. The specially outfitted “Mitzvah Tanks” have been a fixture on American streets for more than five decades. Crossing over the Manhattan Bridge, the cavalcade made its way down Canal Street, up Sixth Avenue until Central Park, and then down Fifth Avenue, from which they fanned out to areas throughout all five boroughs.

The vehicles were staffed by an international cadre of yeshivah students from more than a dozen countries, including the United States, Russia, Australia and Israel, speaking eight languages between them. In keeping with the Rebbe’s vision and teachings to make all people agents for good in making the world a better place, the students’ encouraged others to join in the effort to improve the world by doing a mitzvah: a positive act.

The 70-year anniversary has special poignancy as it comes while the country battles a rise in anti-Semitic incidents. When confronted with rising anti-Semitism, the Rebbe’s message was one of increasing light. “The Rebbe taught us that a little bit of light pushes away much darkness,” said Yisroel Lazar, a yeshivah student in New York. “The best response to hatred is an outpouring of positivity and light.”

Just south of the New York parade, in New Jersey, 100 students from the Rabbinical College of America in Morristown, N.J., took that same message of hope and inspiration in their fleet of 12 mitzvah tanks to the streets of Jersey City, site of the recent anti-Semitic shooting at a kosher grocery store, and other towns across North Jersey. 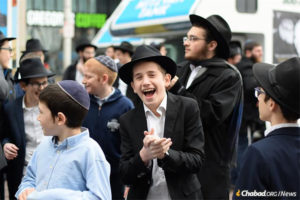 Throughout the day, students joined the local Jewish community in a celebration of Jewish pride and perseverance.

“We want to celebrate 70 years of leadership in the way that the Rebbe taught us, by sharing a mitzvah and doing an act of kindness and positivity that we need so much today,” said Yossi Spalter, organizer of the New Jersey initiative. “Countless people have experienced some of their heritage for the first time on the street or in a mitzvah tank, with a spontaneous bar mitzvah or impromptu Torah lesson, which has had a transformative and lasting impact on their lives.”

Whether mitzvah RVs in the tri-state area, mass Chassidic gatherings in Moscow or added emphasis on Torah study in Coral Springs, Fla., the focus on the 70th anniversary of the Rebbe’s leadership is on doing more, always more.

At the gathering in 1951 during which the Rebbe formally accepted the mantle of leadership, he sounded a theme that he would repeat countless times in the decades to come: The work of bringing about the revelation of the inherent goodness within humankind, of perfecting the world and of bringing Moshiach, could and would not come about on its own.

Making this world into a dwelling place for G d was the mission, the Rebbe told the gathered at that first gathering, saying, “Everything now depends only on us.”