The United Nations Human Rights Council’s release on Wednesday of its blacklist of companies with financial ties and business relations with Israeli Jewish communities in Judea and Samaria is a reminder of Israel’s vulnerability and the vulnerability of Jews worldwide. Photo Credit: news.un.org

Facing the uncertainty of upcoming elections in both Israel and the U.S., what should Jerusalem do? Any move has to be based on a general understanding of how to fight anti-Semitism

The United Nations Human Rights Council’s release on Wednesday of its blacklist of companies with financial ties and business relations with Israeli Jewish communities in Judea and Samaria is a reminder of Israel’s vulnerability and the vulnerability of Jews worldwide. The vile, bigoted list, which singles out for boycott firms that do legitimate business with law-abiding Israelis just because they are Jews is yet another example of the U.N.-led international community’s anti-Jewish bloodlust. 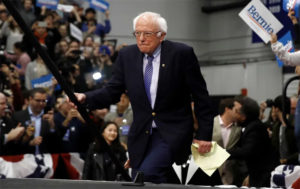 Currently, the Democratic front-runner for the nomination is Senator Bernie Sanders. In a crowded, radical, largely anti-Israel field of candidates, Sanders, the self-avowed socialist, stands out as the most radical and most anti-Israel candidate. His victory in the New Hampshire primaries last week consolidated his control over the party’s progressive base. Photo Credit: AP

This state of affairs is a welcome relief, but Israel cannot rest on its laurels. Trump is standing for reelection this year, and the one central truth of elections that they are unpredictable.

Currently, the Democratic front-runner for the nomination is Senator Bernie Sanders. In a crowded, radical, largely anti-Israel field of candidates, Sanders, the self-avowed socialist, stands out as the most radical and most anti-Israel candidate. His victory in the New Hampshire primaries last week consolidated his control over the party’s progressive base.

The implication of Sanders’s power is straightforward. Whether or not he wins the Democratic nomination, he has already won control over the party’s positions and ideology. His are the ideas and policies everyone else is rushing to embrace. Sanders once said that he wants the Democratic Party to look like Jeremy Corbyn’s Labour Party in Britain. And now, thanks to his consolidation of the progressive base, it increasingly does. 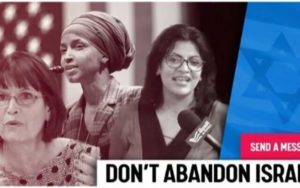 The Corbynization of the party was on abject display last weekend when AIPAC, the pro-Israel lobby, issued a groveling apology to the Democratic Party for a Facebook ad it ran last week against “the radicals in Congress.”

AIPAC’s ad, which it quickly removed, said, “Radicals in Congress are threatening the U.S.-Israel relationship by reducing or cutting aid and military assistance, encouraging the boycott of Israeli companies, and using plainly anti-Semitic language.”

It continued, “It’s critical that we protect our Israeli allies especially as they face threats from Iran, Hamas, Hezbollah and—maybe more sinister—right here in the U.S. Congress.”

The most prominent anti-Semites in Congress today, Reps. Rashida Tlaib and Ilhan Omar, are among Sanders’s most valuable supporters.

AIPAC ran its ad in a bid to help moderate Democrats who are being attacked by the likes of Tlaib and Omar over their support for Israel. But rather than thank AIPAC for trying to help them, they stood by and watched as their fellow Democrats—pro-Israel and anti-Israel alike—viciously attacked the pro-Israel lobby. AIPAC, with its overwhelmingly Democratic membership, collapsed under the strain. 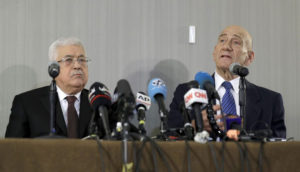 It offered an “unequivocal apology to the overwhelming majority of Democrats in Congress who are rightfully offended by the inaccurate assertion that the poorly worded, inflammatory advertisement implies.”

Of course, there was nothing in the ad that was either inaccurate or inflammatory. AIPAC’s only mistake was its belief that “the overwhelming majority” of Democrats support Israel.

Just over a week ago, 107 Democratic members of Congress and twelve Democratic senators, (among them four presidential candidates), signed letters to President Trump supported by the anti-Israel lobby J Street rejecting his peace plan.

As AIPAC crumbles in the face of a Corbynized Democratic Party, J Street rises.

This brings us to Israel, two and a half weeks before its elections. Prime Minister Benjamin Netanyahu and his coalition partners don’t know whether they will win or transfer power to a leftist government led by Benny Gantz. Israel doesn’t know who the Americans will be electing in November.

Facing this uncertainty, what should it do?

Any move has to be based on a general understanding of how to fight anti-Semitism.

Jews are attractive targets because they are vulnerable and easily isolated. To make anti-Semites back off, Jews need to be as invulnerable and as popular as possible. 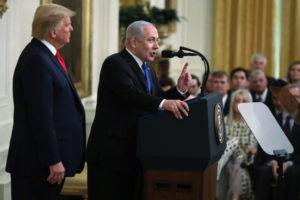 Israeli Prime Minister Benjamin Netanyahu speaks during a press conference with U.S. President Donald Trump in the East Room of the White House on January 28, 2020 in Washington, DC. In a real sense, the future of the Jews in Israel and in America is tied up with the implementation of the Trump plan. And to a significant degree, the March 2 election is a referendum on Trump’s peace plan. Photo Credit: Getty Images

This then brings us to the Trump plan. In a real sense, the future of the Jews in Israel and in America is tied up with the implementation of the Trump plan. And to a significant degree, the March 2 election is a referendum on Trump’s peace plan.

If the left wins on March 2, its leader Benny Gantz will bury the Trump plan by subsuming it in a doomed-to-fail effort to get the anti-Semitic international community to support Israeli sovereignty over the communities in Judea and Samaria and the Jordan Valley.

The administration’s sudden and unexpected decision to oppose the application of Israeli law to the Jordan Valley and the Jewish communities in Judea and Samaria before the March 2 elections means that the only chance that the deal has of being implemented is if Netanyahu forms the next government as the head of a right-religious coalition.

This doesn’t mean that the government is barred from action. To the contrary. There is something Israel can do to sustain the Trump plan and increase the plan’s chances of survival regardless of the results of the March 2 elections in Israel and the November elections in America.

From the dawn of modern Zionism, two forms of Zionism have operated in tandem. The first is diplomatic Zionism. The second is pioneering Zionism. One of the unique aspects of the Trump plan is that it embraces both.

The map of Israel envisioned in the Trump plan adds the Jewish communities in Judea and Samaria to sovereign Israeli territory. It bears out the central maxim of pioneering Zionism—the map of Israel is determined by the settlement of Israel. The land Jews live in is the land over which they take possession. The slogan of the pre-state pioneers, “One more dunam [hectare], one more goat,” lives on in the Trump plan, as relevant as ever.

Over the past 150 years, when progress in one form of Zionism was blocked, the other compensated by taking a more dominant role.

For instance, due to Obama’s obsessive hostility towards Israeli communities in Judea and Samaria and neighborhoods in united Jerusalem, throughout most of his presidency, pioneering Zionists were stymied. Israel couldn’t build new communities or build much of anything inside existing communities without incurring the white wrath of the White House.

So Netanyahu, the greatest diplomatic Zionist since Theodor Herzl, grabbed the baton and started running. Through his peripatetic defenses of Israel’s rights and relentless push to strengthen and widen Israel’s bilateral relations with countries around the world, Netanyahu enabled Israel to withstand the Obama administration’s anti-settlement pressure campaign and get through his presidency with all communities intact.

Due to the administration’s sudden opposition to the application of Israeli law over the Jordan Valley and the Israeli communities in Judea and Samaria ahead of the March 2 elections, the diplomatic pathway to Israeli sovereignty over the areas is stymied. But there is a path forward. It has a diplomatic component but it mainly involves community building.

Ahead of the election, the government can pass a decision with two component parts. First, the decision would commit the government to apply Israeli sovereignty over the areas currently being agreed to by the American-Israel committee in accordance with the Trump plan. Second, the decision would approve significant building in strategic settlement areas in Judea and Samaria and give formal approval to the master plans of the communities built in Judea and Samaria over the past two decades. These communities have been denied formal approval for years due to international pressure. The time has come to treat them fairly.

A government decision along these lines would kill three birds with one stone. First, it would be an appropriate response to the UNHRC’s release of its anti-Semitic blacklist.

Second, it would significantly reinforce the Jewish communities in Judea and Samaria, to the benefit of Israel and American Jewry alike.

In Israel’s case, construction in strategically vital communities and formal approval of the master plans of the younger communities would make it much more difficult for a hostile Democratic administration to harm Israel’s hold on the areas and so make Israel a much less vulnerable target for diplomatic bullying.

Decreased Democratic and United Nations motivation to attack Israel over these communities, whose reinforcement now would obviate the prospect of easily destroying them later, will provide breathing room for American Jews. Progressives will spend less time targeting pro-Israel Jews for their support for Israel. That respite will give the American Jews the opportunity to reorganize their resources in a manner that will expand their ability to protect Jewish civil rights in the face of a hostile administration.

Finally, such a government decision will protect Israel from the vagaries of a leftist government. It’s much easier for a government not to take controversial action than to walk back action after it’s been taken. A Gantz government would never pass a decision to endorse sovereignty over the Jordan Valley and the Israeli communities, or approve building in strategic areas and approve the master plans of young communities. But it would be hard pressed to supplant a government decision in effect when it takes office.

And if Netanyahu and the Likud-led religious-right bloc win on March 2, a decision along these lines before the election will make a decision to actually apply Israeli law to the Jordan Valley and the Israeli communities in Judea and Samaria look more like an afterthought than an earthquake.

Sanders’s victory in New Hampshire and the UNHRC release of its anti-Semitic blacklist remind us of the dangers lurking around the corner. The government must take Zionist action now to blunt those dangers and curb our enemies’ enthusiasm.

Caroline Glick is an award-winning columnist and author of “The Israeli Solution: A One-State Plan for Peace in the Middle East.”