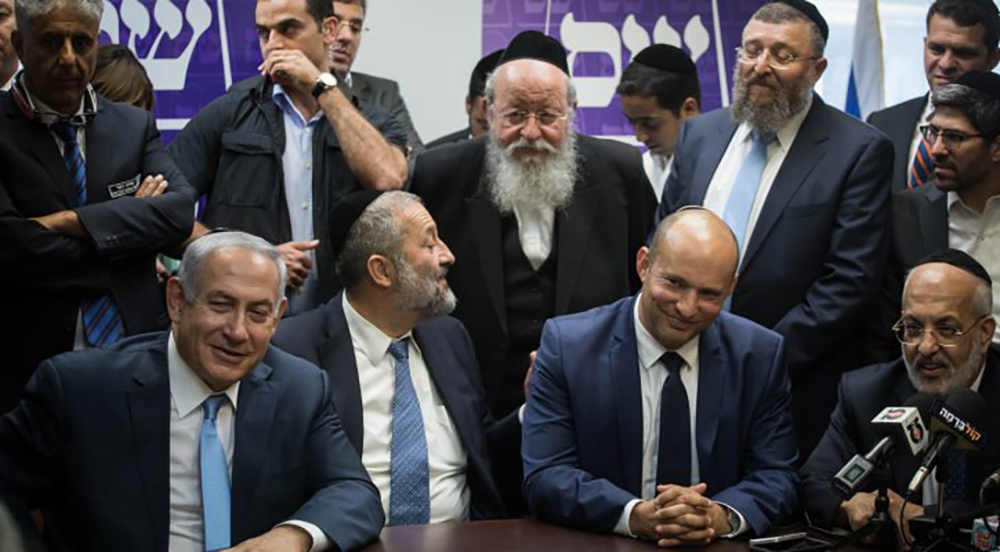 Yamina, Shas and United Torah Judaism formalize their bloc behind the prime minister once again.

The right-wing parties that have been loyal to Prime Minister Benjamin Netanyahu for the last two inconclusive elections have again promised to back only a Likud party headed by him in the March polls.

Ultra-Orthodox Shas and United Torah Judaism and nationalist-religious Yamina leaders penned a letter to Netanyahu on Sunday affirming that their positions hadn’t changed and that they would not break ranks to join a Blue and White-led government even if it is the largest party after the elections.

“We will not support or join any government, except a government formed by the Likud and headed by Prime Minister Benjamin Netanyahu. We emphasize that we will not negotiate separately on the establishment of a different government,” wrote Aryeh Deri, Yaakov Litzman and Naftali Bennett.

The letter was Deri’s idea, to dispel the rumors that have been flying recently that questioned the loyalty of the Likud’s allies in the bloc. Israel Beiteinu has been behind those that charged the ultra-Orthodox parties with making deals with Blue and White. Some Likud officials have been promoting similar rumors against Yamina.

The Likud’s purpose was to try to drive right-wing voters to support its party instead of one of the smaller satellite parties, so that it would be able to overtake Blue and White as the largest party and therefore be the first give the chance to form a coalition by President Reuven Rivlin.

The polls have held steady over the last few months, showing that Benny Gantz’s Blue and White party has a 2-3 seat lead over Likud.

The letter will hopefully put a stop to this campaign of “lies and fake news” that is “trying to harm the Right,” as UTJ chairman Litzman called it. The public commitment also shows that having political partners with a larger number of mandates will not harm the Likud’s chances to form a government since they would refuse to follow anyone else other than Netanyahu.

Netanyahu was happy to receive the letter that supported him despite his upcoming trial on charges of bribery, fraud and breach of trust in three different cases.

“The right-wing bloc’s commitment today is the final nail in the coffin for Gantz’s bluff,” the prime minister said.

“It is more obvious than ever that Gantz has no chance of creating a government without the support or abstention in the Knesset of Ahmad Tibi and the Joint [Arab] List. Any government that relies on the Joint List’s support will be a danger to Israel’s security.”