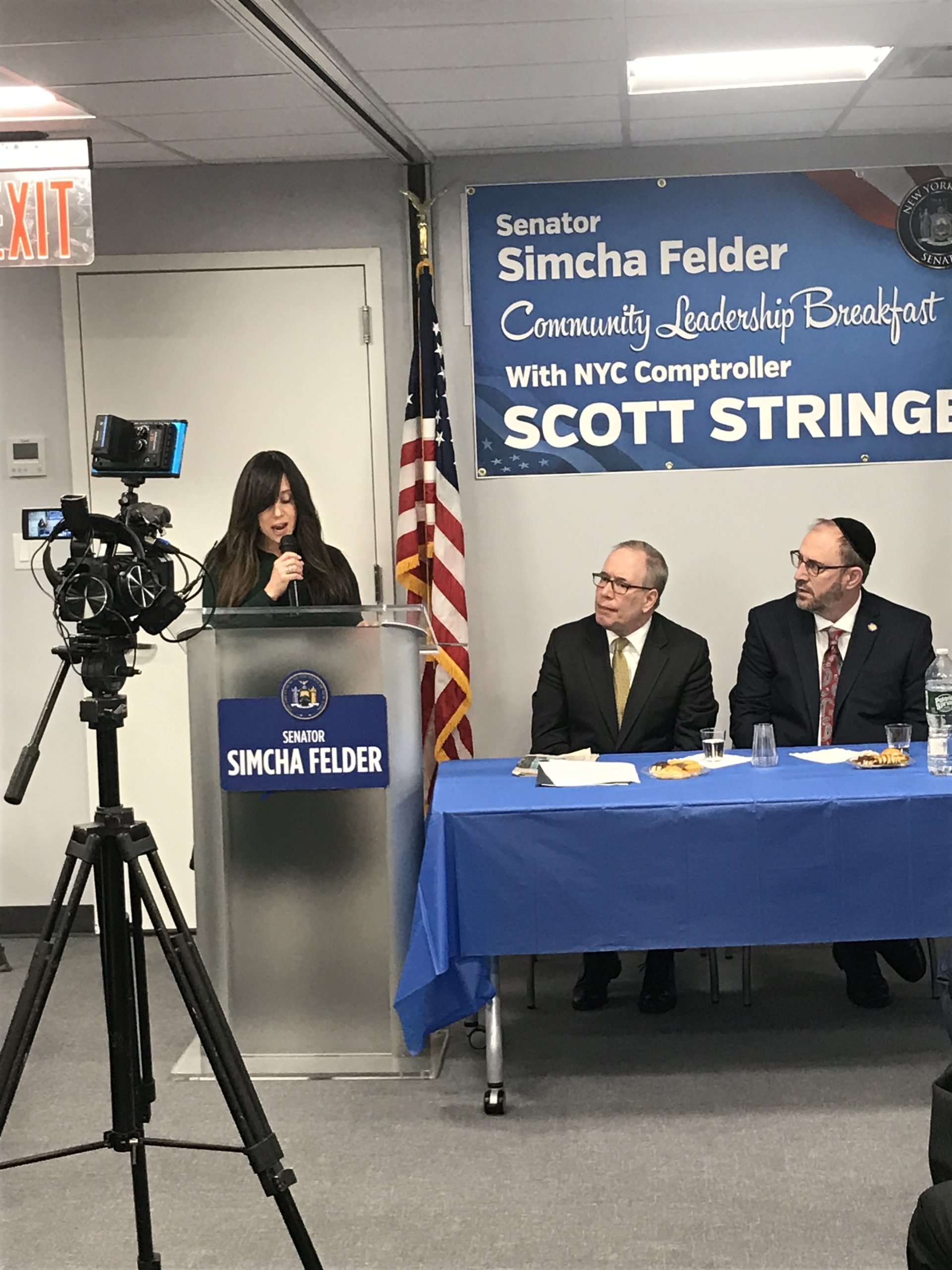 Dr Frieda Flaishman speaking in regard to waiting for a long time to receive help for special education children.

On Wednesday morning, February 19th, throngs of educators from the Orthodox Jewish communities of Flatbush and Boro Park gathered at the Ohel facility for physically and emotionally disabled children near Avenue M to hear New York City Comptroller Scott Stringer address the gathering.

Because Stringer’s job involves the allocation of funds to schools, centers and various other institutions for the express purpose of providing for the educational and psychological needs of the community’s disabled children, complaints about the snail’s pace in which city funds are received for these programs were registered.

The community breakfast was sponsored by State Senator Simcha Felder, a Democratic from Brooklyn.

Questions of all kinds and of all natures were posed to Stringer (who just happens to be throwing his hat in the ring for the next NYC mayoral race). While Stringer struggled through some of the critical questions posed to him by constituents and other community leaders, he was completely non-plussed and more than a bit irritated when asked by Jewish Voice publisher David Ben Hooren why he had chosen to grant political endorsements to such controversial politicos as Julie Salazar and Tiffany Caban.

Julie Salazar is a state senator with a checkered past, to say the very least. She’s been billed as the next Alexandria Ocasio-Cortez, a socialist Democrat with far left leaning political views. At 29 years old, she holds the state senate seat in District 18 which encompasses the Brooklyn neighborhoods of Bushwick, Williamsburg and parts of Bedford-Stuyvesant and Brownsville.

In the summer of 2018, she received Stringer’s ringing endorsement, but the candidate had a lot of explaining to do. According to a September 2018 story in Rolling Stone magazine, Salazar who is originally from Miami was arrested in 2011 for impersonating the wife of former New York Mets star Keith Hernandez in order to commit bank fraud. Charges against Salazar were never brought against her but rumors persisted that she’d had an affair with Hernandez. She adamantly denies these reports and rumors and no conclusive evidence has been brought that even remotely suggests that she was personally involved with Hernandez.

During that summer, however, she did allege that she was Jewish when in fact she was not. It would appear that saying one is Jewish in a district with a sizable number of Chassidic Jews reside and vote might be an irrestible temptation. She also misled voters about whether she was an immigrant and her brief stint as a Jesus loving Republican. She had also tweeted that she was going to be outed as a sexual assault survivor.

Another person who was endorsed by Stringer was Tiffany Caban. She was a candidate in the Democratic primary for Queens County’s District Attorney in the State of New York, which she lost to Queens Borough President Melinda Katz.

Cabán was endorsed by such far left-wing politicians such as Alexandria Ocasio-Cortez, Bernie Sanders, Elizabeth Warren, and Larry Krasner, as well as several progressive members of the New York State Legislature and Suffolk County, Massachusetts DA Rachael Rollins. The race drew national attention, drawing comparisons to Ocasio-Cortez’s upset victory in the 2018 House primary election over Joe Crowley. The Democratic Socialists of America’s backing of Cabán was especially influential in the race.

Having said all this, Comptroller Stringer is going to have to develop a thicker skin when it pertains to answering questions about his political endorsements. After all, Stringer was to become mayor of the Big Apple and he should be put on notice that his Orthodox Jewish constituents may have an issue with him giving his imprimatur to Democratic Socialists on the local level.

Answering all questions, despite how challenging they may be, is part and parcel of running for office, so a word of advice to Stringer. Do your homework, don’t denigrate questioners and respect the people that you wish to serve.