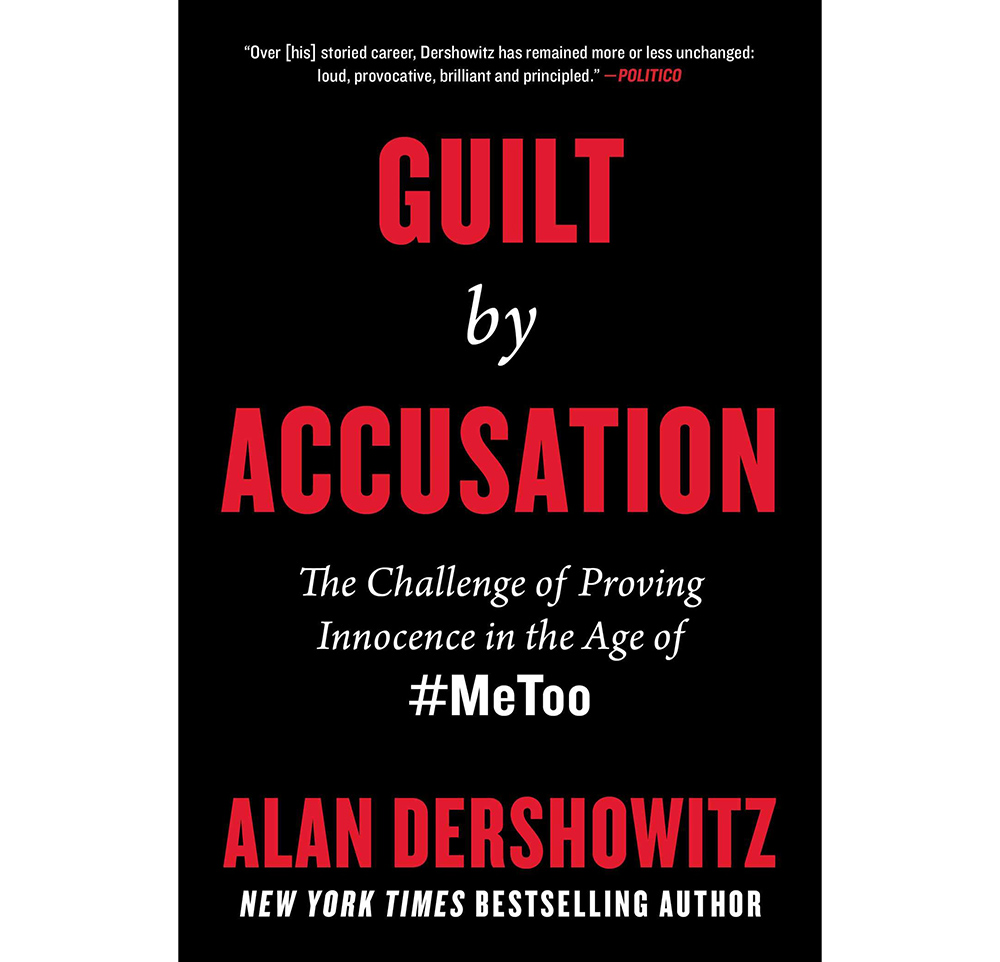 Guilt by Accusation: The Challenge of Proving Innocence in the Age of #MeToo

A Yale professor of forensic psychiatry has diagnosed guess who — yours truly — as suffering from “psychosis” for expressing legal views that happen to be on the Constitutional rights of President Donald Trump. Dr. Bandy Lee has never met me, never examined me, never seen my medical records, and never spoken to anyone close to me. Yet she is prepared to offer a diagnosis of “psychosis” which she attributes to my being one of President Trump’s “followers.” (I voted for Hillary Clinton and am a liberal Democrat.)

Indeed, Dr. Lee went even further, diagnosing “the severity and spread of ‘shared psychosis’ among just about all of Donald Trump’s followers.” Nor does she seem to be using these psychiatric terms as political metaphors, dangerous as that would be. She is literally claiming that we are mentally ill and our views should be considered symptoms of our illness, rather than as legitimate ideas.

Dr. Lee has a history of such unethical conduct. She previously diagnosed President Trump as being psychotic. Now she is doubling down accusing me of having a “shared psychosis” with President Trump, and having “wholly taken on Trump’s symptoms by contagion.”

Dr. Lee’s absurd conclusions rest on the factual assumption that I am guilty of sexual misconduct in the Jeffrey Epstein case, despite overwhelming evidence that I never even met the woman who accused me. My accuser has essentially admitted never meeting me in a series of emails and a draft manuscript that she unsuccessfully tried to hide. Her own lawyer, in a recorded conversation, has admitted that it was impossible for us to have met and that she was “wrong … simply wrong” in accusing me. Despite this overwhelming evidence — all documented in my book, Guilt by Accusation: The Challenge of Proving Innocence in the Age of #MeToo, Dr. Lee includes as a factor in her diagnosis, my unwillingness to show “remorse” for something I did not do. She cites as additional “proof” of my “psychosis” that I express “delusional level impunity,” and a “lack of empathy.” All this without ever meeting me!

She also believes that my use of the word “perfect” — the same word used by Donald Trump in describing his phone call to the Ukrainian President — is evidence of a “shared” psychosis. She does not mention that I used the word “perfect” in the context of rebutting the false accusations against me and proclaiming, quite truthfully, that I have never had sex with any woman other than my wife, since the day I met Jeffrey Epstein. I used the word “perfect” in reference to my fidelity during the period in which I was falsely accused, just as someone might say she had a “perfect” attendance record. Moreover, Dr. Lee neglects to mention that the interview during which I used that word took place months before President Trump used it. I guess she believes he caught the contagion from me.

It is difficult to imagine anyone ever hiring Dr. Lee as a forensic psychiatrist to offer an actual diagnosis of a litigant. On cross-examination she would have to admit that she has diagnosed “just about all of Donald Trump’s followers” as having “shared psychosis.” This would likely include jury members and perhaps the judge, along with millions of voters.

If it is difficult to imagine Dr. Lee as an effective forensic witness, just try to imagine her as a fair teacher. Even at Yale, some of her students are likely to be Trump followers. Would she grade them — or diagnose them? Would she prescribe anti-psychotic drugs to her students who she believed were Trump “followers”? Would she refuse to recommend them because of their illness? Would they be entitled to the protection of the American with Disabilities Act? Does she teach her students to diagnose their classmates and friends who disagree with them politically, instead of engaging with them?

Her resort to diagnosis rather than dialogue is a symptom of a much larger problem that faces our divided nation — too many Americans are refusing to engage in reasoned dialogue with people with whom they disagree.

Dr. Lee is part of that problem, not its solution.

Alan M. Dershowitz is the Felix Frankfurter Professor of Law Emeritus at Harvard Law School and author of the forthcoming book, Guilt by Accusation: The Challenge of Proving Innocence in the Age of #MeToo, Skyhorse publishing, November 2019.