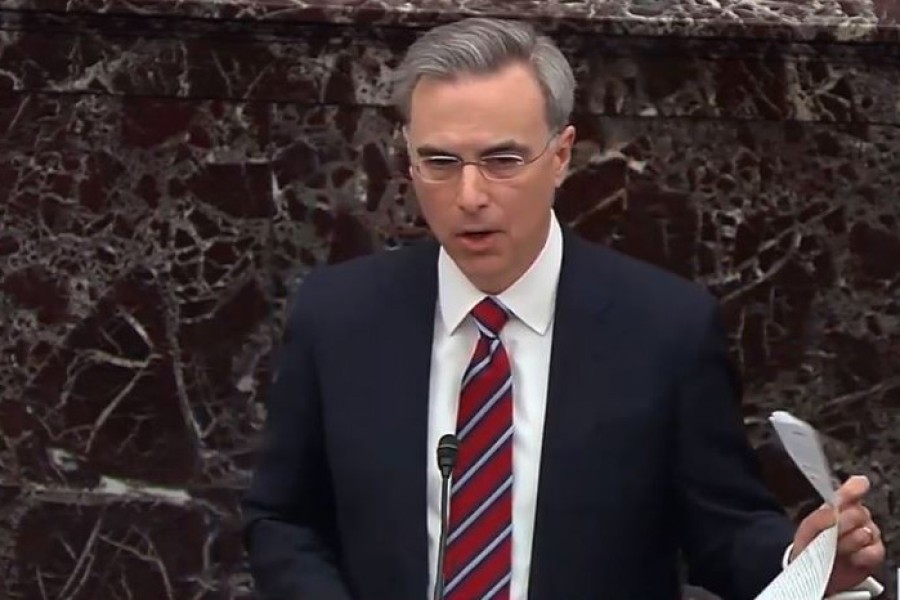 “We don’t believe that they have come anywhere close to meeting their burden for what they’re asking you to do,” Cipollone said.

Cipollone also reiterated an often-repeated criticism of the Democratic-led impeachment proceedings — that they would nullify Trump’s 2016 election win and reduce choices for voters before the upcoming November presidential election.

Saturday’s defense of Trump amounted to a preview of the arguments that will be laid out in further detail next week.

During his presentation, White House deputy counsel Michael Purpura played a video clip of lead House manager Adam Schiff embellishing the conversation Trump had with Ukraine’s president on a July 25 phone call that is central to the impeachment probe.

“That’s fake. That’s not the real call, that’s not the evidence,” Purpura said in an attempt to discredit Schiff and other Democrats.

Schiff acknowledged after the hearing, during which he recounted the phone call, that his comments were “in character with what the president was trying to communicate.”

Trump is accused of pressuring Ukrainian President Volodymyr Zelenskiy during the July 25 call to open a corruption investigation into former Vice President Joe Biden — a major Democratic challenger to Trump’s re-election bid this year — and Biden’s son, who worked for a Ukrainian energy company.

The president allegedly withheld military aid to Ukraine unless Zelenskiy publicly announced a probe into Biden and his son Hunter’s lucrative position with the Ukrainian company. No evidence against the Bidens has ever surfaced.

During the prescheduled call, Zelenskiy told Trump that Ukraine sought more U.S. military assistance. Trump responded, “I would like you to do us a favor, though,” and then asked Zelenskiy to investigate the Bidens and an unfounded claim that Ukraine, not Russia, interfered in the 2016 U.S. election.

The U.S. assistance for Ukraine was formally frozen on July 25 under a legal provision known as an apportionment.

The aid embargo was lifted in September, and Jason Crow said during the House impeachment managers’ closing arguments Friday, “It was only lifted because President Trump had gotten caught.”

But Purpura said Saturday that Ukraine did not become aware of Trump’s hold on the military aid until the latter part of August, well after the July 25 call.

The House of Representatives impeached Trump in December and he now faces two articles of impeachment that accuse him of abusing the office of the presidency and obstructing congressional efforts to investigate his actions related to Ukraine.

Schiff, the chairman of the House Intelligence Committee, said earlier this week that all Trump cared about was investigating Biden, especially after early polls showed the former vice president would soundly beat Trump in the election.

Trump and his lawyers were invited to appear before the House Judiciary Committee during the impeachment inquiry, but declined.

Democratic lawmakers closed out their final arguments against the president Friday, arguing that if Trump is not removed from office he will continue to abuse power.

“At the heart of Article Two, obstruction of Congress, is a simple troubling reality: President Trump tried to cheat, he got caught, and then he worked hard to cover it up,” said Hakeem Jeffries, one of seven House Democrats serving as managers of the trial.

Jeffries said Trump administration officials were aware of the president’s alleged misconduct last year and called the situation in the White House a “toxic mess.”

Schiff told lawmakers, “You cannot leave a man like that in office.” He argued that the president will not change and his actions will remain the same. “You know it’s not going to stop. It’s not going to stop unless the Congress does something about it.”

“He has shown neither remorse nor acknowledgment of wrongdoing,” said Schiff.  “Do you think if we do nothing, it’s going to stop now?”

In his final argument, Schiff urged senators to “give America a fair trial,” saying, “She’s worth it.”

Trump is only the third U.S. president to be impeached and tried before the Senate. Andrew Johnson was impeached in 1868 because of a post-Civil War dispute over states that seceded from the union.  Bill Clinton was impeached in 1998 for lying to a grand jury about a sex scandal. Both Johnson and Clinton were acquitted and remained in office until the end of their terms. (VOA News)