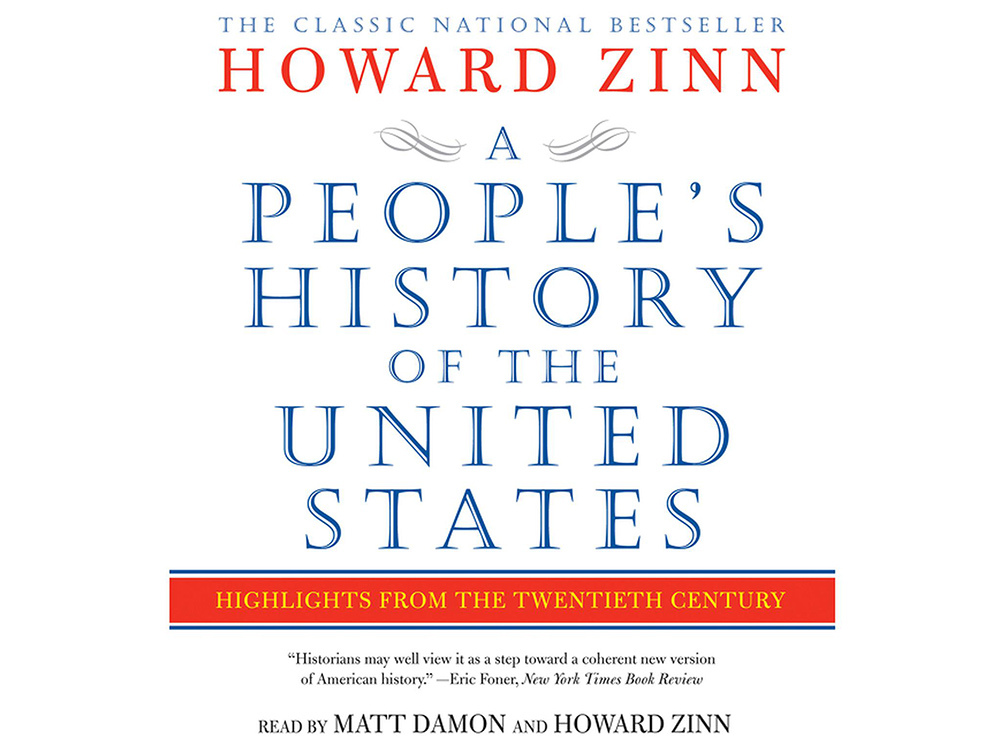 National pride and patriotism are slated for destruction, corroborated by history classes that use Howard Zinn’s “A People’s History of the United States,” which focuses on the communist’s views of America’s historic injustice, with its dubious evidence and conclusions. Photo Credit: Audiobookstore.com

Private colleges are in serious financial trouble. According to Bloomberg, they may have to merge with others or close their doors. The seeds planted by the “homeless, tempest-tossed” academics from Frankfurt, Germany, 84 years ago, are now bearing fruit.

The private colleges are yet another casualty of the plot against American values and exceptionalism initiated by those outcasts from the Frankfurt School of Social Theory who arrived in New York, in 1935. The theorists began their trek through the Institutions, including higher education, changing the system that was among the best in the world, and poisoning the wells as they advanced. Whether fools or rogues, they soon realized that the Judeo-Christian West’s superiority could only be destroyed from within, by having their operatives join the machinery of the old institutions, and by collaborating with Third World liberation movements and other dissident minority. It would take some generations, but the prize of the most envied capitalist country in the world – America and the Free West — was worth their patience.

The learned academics within the private colleges readily complied with the new Common Core curricula, textbooks, teaching films and scripts, recognizing the Frankfurt stamp of approval. They introduced identity politics, which now requires a six-figure professional to help the children cope with the resultant tribalism and victimhood – sorely needed funds down the drain.

They welcomed new professors who spew antisemitism and anti-Americanism and stood mutely by while guest speakers with opposing opinions were jeered out of the lecture halls. The students are emerging as leftists, socialists, communists, and Islamists, decidedly ignorant in every discipline, but eagerly engaged in social justice courses, community organizing, political protests, and deadly violence to destroy the spirit of freedom and the soul of our nation. Critical Theory has taught the younger generation to break down fences before they understand why they were erected.

These are the rebels with a thousand empty causes, the socialists who will not support their universities, but who will expect compassion. Unsurprisingly, this is affecting the coffers of Academe; the alarms have been sounded.

The business of destroying American education from within is gathering momentum. As Walter E. Williams explained in Fraud in Higher Education, only 37% of white college students test as college-ready, but 70% are admitted, and only 17% of black high school graduates test as college-ready, but 58% are admitted, with most unable to read, write, and do math at 12th grade level. Forty percent of college students require developmental math and English classes at an annual cost of $7 billion. Only 25 percent of students who took the ACT in 2012 met the readiness benchmarks in English, reading, math and science. Students are advanced by their race, not by achievement, showing no significant improvement in critical thinking, complex reasoning and writing by the end of their sophomore year. Education Secretary Betsy deVos just confirmed, “The country is in a student achievement crisis.”

Ronald Reagan famously said, ”Freedom is never more than one generation away from extinction.” Every generation must uphold the legacy of freedom and to do so, it must understand the origins of democracy, our government structure, rights and responsibilities, and methods of public engagement. But the work of the so-called Progressives (ultra Regressives) has brought the knowledge of civics and government to an all-time low. Some young people are even learning tolerance and social justice from books supplied by the Southern Poverty Law Center, an FBI-recognized global and domestic terrorism-inspiring hate group, a perfect example of the bedfellows recommended by the Frankfurt outcasts.

National pride and patriotism are slated for destruction, corroborated by history classes that use Howard Zinn’s “A People’s History of the United States,” which focuses on the communist’s views of America’s historic injustice, with its dubious evidence and conclusions. America is shown as colonialist oppressor of the poor and disenfranchised, with no reference to our 13th amendment to the Constitution that abolished slavery here. The students are intentionally dumbed down about America’s history, and taught to accept a whitewashed Islam and Communism. Their violence against the monuments is denial of our history and extends to disrespect and breakdown of our laws and law enforcement.

Progressives vilify our national pride and corrupt public trust so as to destroy our society and reconstruct it into another – hideous – image, with the morale or soul of the generation siphoned out. Therefore, the bulk of high-quality fiction, poetry, theater and other imaginative and inspiring texts are replaced by informational prose, newspaper and social media stories – dry topics of social studies designed to enervate the individual and discourage reading. Instead of topics that encourage and inspire, young teens read of emotional difficulties and social justice issues – topics such as teen angst, bullying and sexual harassment, underage drinking, sexual molestation, complex relationships in dysfunctional families, and suicide. These depressing social issues, irrespective of the students’ emotional maturity, may well have a direct correlation to their increased suicide rate, doubled for boys and tripled for girls. Our thirty million illiterate adults are a step toward the illiteracy of despotic regimes.

The intellectual depletion shows our 15-year-olds to be lagging behind in math at 39th of their peers in 69 other countries. These are not “cultural differences,” as math is the most concrete and easiest way to judge across cultures. Common Core math offers a “one size fits all” approach that holds the children back and thwarts autonomy. DeVos reported that eighth graders failed to meet the low standard of the ‘90s, sinking below their predecessors from two years before.

In an unexpected twist, Progressives have found some inspiration in Islam and the two are now cooperating to destroy and restructure the society that has nourished them. Common Core includes the study of LGBTQ history for a full year, with transgender organizations, activists, and websites abetting gender confusion, encouraging life-altering “treatments” that damage their bodies and mental health. This is sold as “inclusivity,” but is a step toward fully accepting and imitating the Islamic family unit of one man with four wives as young as age 7, and the approval of pedophilia. The Islamic family unit is a hotbed of dysfunction, complete with rivalry, tension, childhood rape, stealth homosexuality, blame, shame, and extreme violence.

The closer we come to emulating Islam, the further we fall from grace, from the morality of Judaism and Christianity, until we become no better than lower species. Quotes from Islam’s most famous spokesman, Ayatollah Kohomeini, provided only partially here, may be found on the Internet: Sex and Islam, http://www.truthbeknown.com/islamquotes.htm Pedophilia and Bestiality in Islam, by Jennifer King, stipulates that all Muslims are ordered to imitate Muhammad’s perfect example in thought, word and deed. The Prophet engaged in bestiality; it is not forbidden, but bathing instructions must be followed.

Secretary of Education Betsy deVos admitted, “The results are, frankly, devastating.” Literacy and civics must be made a national priority and it is time to denounce what socialism is doing to our children. This is America’s wake-up call.