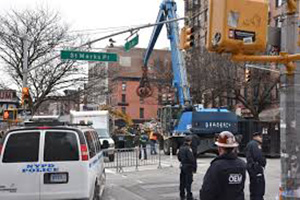 Prison sentences have been handed down for those convicted in the deadly gas explosion that killed Nicholas Figueroa and Moses Lucon Yac and damaged several buildings in the East Village in March of 2015. Photo Credit: Wikipedia

Prison sentences have been handed down for those convicted in the deadly gas explosion that killed Nicholas Figueroa and Moses Lucon Yac and damaged several buildings in the East Village in March of 2015.

A trio of individuals were given sentences ranging from four to 12 years by Manhattan Supreme Court Judge Michael Obus.

The case showed that there had been an illegal diversion of gas from one Second Avenue building to another, which caused the explosion.

“What the defendants did, in a matter of speaking, was roll the dice with the lives of many people,” Judge Obus said before a large crowd inside his courtroom. “The results, as we know, are catastrophic.”

The scene overflowed with pathos, as family members of the defendants cried and Hrynenko screamed “I love you” as she was led away.

Hrynenko, “who owned the buildings, and the others rigged a hidden basement set-up to funnel gas from 119 Second Ave. to 121 Second Ave. near Seventh Avenue, causing the explosion, according to prosecutors,” the New York Post reported. “The fiery blast killed Nicholas Figueroa, 23, who had been eating lunch at Park Sushi on the ground floor of 121 Second Ave., and Moises Locon, 27, a busboy at the restaurant. The explosion also maimed at least 13 other people.”

Obus noted from the bench that the three standing before him “bypassed strict regulations. Two people were killed, many others were seriously injured. It’s miraculous that more people were not injured or killed.”

It was back on March 26, 2015, that Figueroa, 23, “was on a lunch date at Sushi Park restaurant, on the ground floor of 121 Second Ave., where Yac, 27, was working as a busboy, when the explosion occurred, killing them both from blunt impact and smoke inhalation,” reported thevillager.com. “Thirteen other individuals were injured by the blast — including a tourist who lost an eye. For those injuries, the three defendants are also being charged with multiple counts of assault in either the second or third degree.”

Kukic spoke to the families of the two victims, noting “I feel very bad for the families who lost their brother and son. If I was able to change it, I would give my life for theirs in a second.”

Said Manhattan District Attorney Vance, “If you cut corners based on expediency and profit and kill or injure New Yorkers in the process, you are engaging in criminal conduct. “Developers and property owners across the city should keep today’s sentencing in mind.”