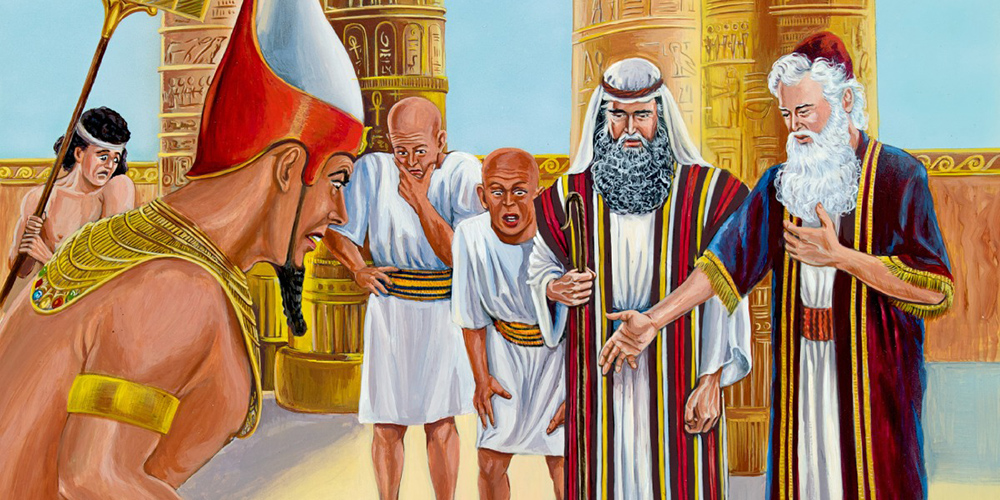 HASHEM sent Moshe Rabbeinu to be the redeemer of the Jewish people. However, from the moment that he embarked on this mission, the slavery became more intense and the pain more profound. Out of love for his nation, Moshe turned to HASHEM and said, “Why have You worsened the situation? Why have You sent me?”

“And Moshe returned to HASHEM and said, “HASHEM, why have You done evil to this people? Why have You sent me?” — Shemos 5:22

HASHEM sent Moshe Rabbeinu to be the redeemer of the Jewish people. However, from the moment that he embarked on this mission, the slavery became more intense and the pain more profound. Out of love for his nation, Moshe turned to HASHEM and said, “Why have You worsened the situation? Why have You sent me?”

The Gemara tells us that Moshe was punished for questioning HASHEM. HASHEM said, “It is a shame that that which is lost can no longer be found.” It is as if HASHEM were saying, “They don’t make them like they used to. Avrohom, Yitzchak, Yaakov, those were great people, but no more. Moshe, you don’t compare to them. They trusted Me, but you aren’t on their level.”

Moshe was the single greatest human being who ever lived

Since we know that Moshe was greater than even the Avos, how can we understand this Gemara? It seems to saying that Avrohom, Yitzchak, and Yaakov were superior to Moshe.

The difference between Emunah and Bitachon

The answer to this question lies in understanding the distinction between emunah and bitachon. The Rambam defines emunah as the knowledge that HASHEM created and continues to run all of Creation. Simply put, nothing can exist and no activity can occur without HASHEM.

Bitachon, however, is a quite different. The Chovos Halevovos defines bitachon as trusting in HASHEM. It is a sense of relying on HASHEM to watch over and protect me, as if to say, “I take my heavy burden and place it on HASHEM.” While I am responsible to be proactive, I am not in charge of the outcome, and I am not the determinant of the results. I rely on HASHEM to care for me.

Emunah is a state of understanding; bitachon is a state of trust. Emunah means knowing that HASHEM is involved in every activity on the planet; bitachon means trusting in HASHEM in every situation.

A person can have emunah and not bitachon

Aperson can have emunah and not bitachon. Pharaoh was a classic example. When threatened by the Jewish overpopulation, Pharaoh’s solution was to throw the baby boys into the Nile. The Medrash explains that this wasn’t a flippant reaction – it was highly calculated. Pharaoh knew that HASHEM promised Noach that He wouldn’t bring another flood. He also knew that HASHEM pays back “measure for measure.” Therefore, Pharaoh determined that HASHEM would want to bring a flood to pay back the Egyptians for drowning the babies, but because of HASHEM’s promise to Noach, that couldn’t happen, so he felt protected from HASHEM’s wrath.

Both emunah and bitachon are based on relating to the world in a deeper manner. Emunah is the understanding that HASHEM is involved in more than just the big picture issues: life and death, war, famine, disease. . . HASHEM is involved in the minutiae of my daily life. HASHEM is there with me, 24/7, 365, all day, every day, from morning to night.

Amazingly, I can have this understanding and yet lack a level of trust in HASHEM.

Bitachon is predicated upon knowing that HASHEM has my best interests in mind and that He knows better than I what is for my good. When a person realizes this, and then takes his heavy load and transfers it to HASHEM – that is bitachon.

The answer: Moshe was greater in emunah – the Avos were greater in bitachon

The answer to the question seems to be that Moshe Rabbeinu was on a higher level of emunah than any other human being, then or since. He saw HASHEM with an absolute clarity. Just as we see a piece of wood in front of us as undeniably real, he saw HASHEM – right there. But absolute trust in HASHEM doesn’t necessarily follow. Bitachon is learned, and practiced. Much like a character trait that one develops over many years, one learns, often through life experiences, to be totally and utterly trusting in the kindness of HASHEM. Apparently, the Avos reached a higher level in this regard. They had an unwavering sense of the constant goodness and loving kindness of HASHEM; hence, they were able to be more trusting of HASHEM even when on the surface, there were many questions to be asked. Moshe was greater in emunah, while they were greater in bitachon.

This distinction has great relevance. Often our problems with faith come from this one issue: we have emunah, but not bitachon. When a person comes to the core understanding that HASHEM is more concerned for my good than I am, and that HASHEM knows my needs far better than I, he comes to a different degree of trust, a different level of relying on HASHEM. He comes to true bitachon.

For more on this topic please listen to Shmuz #18 –The Difference between Emunah and Bitachon.

The new Shmuz on Life book: Stop Surviving and Start Living is now in print! It is a powerful, inspiring work that deals with major life issues. Copies are available in sefarim stores, or at www.TheShmuz.com, or by calling 866-613-TORAH (8672).