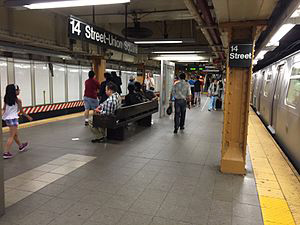 The modern-day mugging occurred on Sunday January 12th, before 3 PM, at the Union Square subway station, on the mezzanine of the 4 train. Photo Credit: Wikipedia

The 21st century now boasts a new mugging style. Muggers are apparently evolving with the technology era to make up for the fact that most people carry less cash.

A 17-year old teen was robbed of $100 by two muggers in Manhattan, when they forced him to transfer them money via an app on his cell phone, police said. As reported by the NY Post, the modern-day mugging occurred on Sunday January 12th, before 3 PM, at the Union Square subway station, on the mezzanine of the 4 train. The victim was approached at first by one man, who offered to sell him some candy, as per the police report. The teen gave him $2 for the candy, which the crook took, but then demanded more money, threatening to “F him up” if he didn’t hand over the rest of his cash. “Do what you have to do,” the victim reportedly answered the mugger.

In response, the suspect called over an accomplice. The second suspect threatened to stab the teen if he refused give him his cell phone. The second mugger took the victim’s phone, and used it to immediately transfer $100 to himself using a payment app. He then gave the phone back to the boy. The two muggers fled into the subway station, cops said. The victim was thankfully not injured during the incident.

Police are investigating whether the mugger can be identified through the payment app’s history. Transfers made on most payment apps would be traceable. Apps such as Venmo, Zelle, Paypal, Square Cash, google pay, or Facebook need to be linked to a bank account, credit card or debit card. Only crypto currencies are usually notorious for allowing identities to remain ambiguous. It seems police have also evolved with the 21st century, as police also have video footage of the mugging suspects.

The NYPD announced in April 2018, that index crimes continue to decline in NYC, breaking ‘Low-Crime’ records for murder, robbery and burglary. The crimes fell 6.7 percent compared to 2018, with 1,900 less complaints year-to-date. Despite the improvement, there is of course still crime in NYC, which is the largest city in the country. The aforementioned incident follows the infamous Christmas Eve mugging on Third Avenue in the Morrisania section of the Bronx, in which a 60-year-old man was brutally beaten and later died while the muggers got away with just $1.