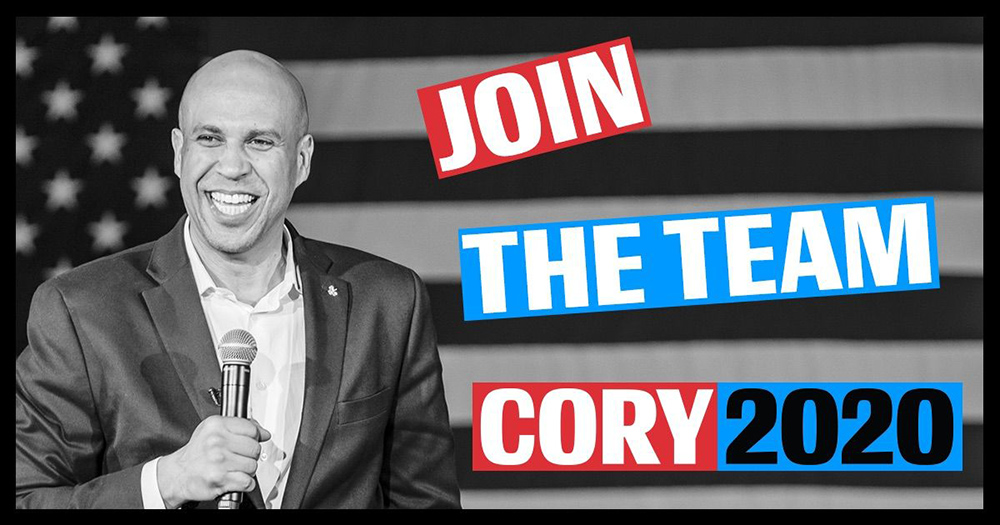 On Monday January 13th, Democratic Presidential candidate Cory Booker ended his bid for 2020, winding up a campaign whose primary message was unity and love. As reported by WPXI News, Booker, a U.S. senator from New Jersey who began his campaign in February, has been struggling to raise funds for his presidential bid. Photo Credit: corybooker.com

On Monday January 13th, Democratic Presidential candidate Cory Booker ended his bid for 2020, winding up a campaign whose primary message was unity and love. As reported by WPXI News, Booker, a U.S. senator from New Jersey who began his campaign in February, has been struggling to raise funds for his presidential bid. The 50-year-old Democrat boasted taking only grassroots contributions, and publicized slogans like “We won’t take a dime from corporate PACs or federal lobbyists”. He has been lagging behind in most surveys despite heart-warming slogans like “The lines that divide us are nowhere near as strong as the ties that bind us”. Booker was unsuccessful in meeting the polling requirement which would have made him eligible to partake in Tuesday’s debate. Booker also missed last month’s debate. Of late, he has been polling in the low single-digits in the early primary states as well as nationwide.

Booker sent an email to his supporters, saying that he “got into this race to win” but that not being in the debates makes fundraising a real challenge. “Our campaign has reached the point where we need more money to scale up and continue building a campaign that can win — money we don’t have, and money that is harder to raise because I won’t be on the next debate stage and because the urgent business of impeachment will rightly be keeping me in Washington,” he said. Booker had forewarned that President Trump’s impeachment trial, which is a propriety to him, would deal a “big, big blow” to his campaign by averting his attention away from Iowa in the final weeks before the Feb. 3 Iowa caucuses.

A progressive candidate, during his seven years in City Hall, Booker became known for pushing for criminal justice reform, marijuana legalization, and for brainstorming new ways to close the racial wealth gap. Booker was formerly lauded for leading the renewal of Newark, NJ. Though Booker has not yet formally endorsed any other candidate, in his email he pledged to do “everything in my power to elect the eventual Democratic nominee for president”. Booker will run for reelection in Senate this year, and is expected to be victorious despite a large number of candidates eying his seat.

Earlier in January, Julián Castro, another progressive Democrat and the only Latino in the Presidential race, also dropped out after struggling with low polls and fundraising woes. There are now only 12 remaining presidential candidates, whereas there were formerly two-dozen. As per WPXI, the original lineup included a historically diverse group, but now the only African American candidate remaining is former Massachusetts Gov. Deval Patrick, who is struggling to register in the polls being a newcomer into the race.