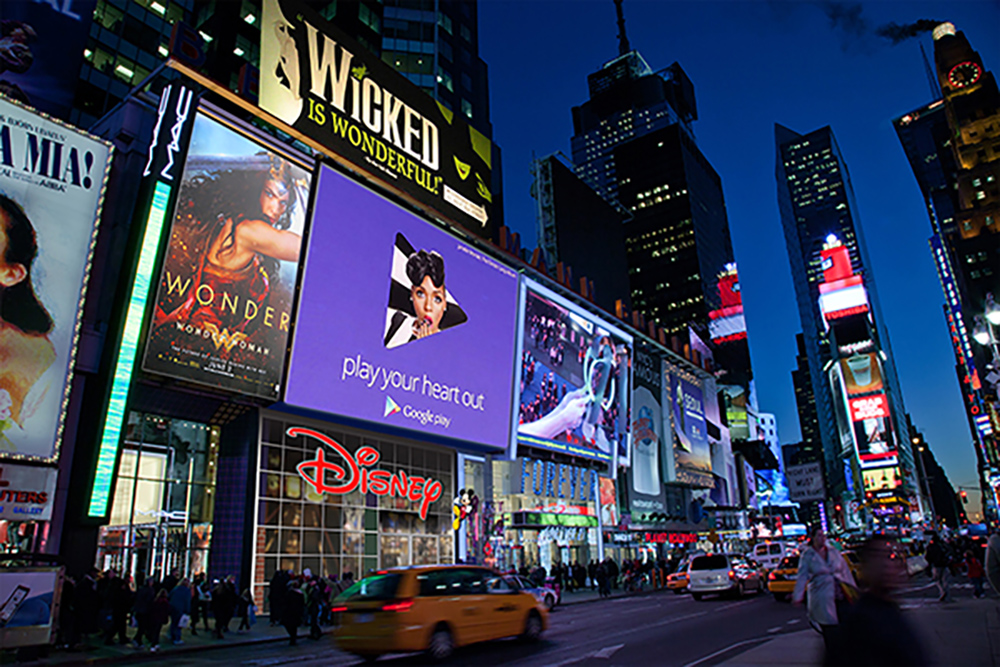 A new tenant is being sought for the four-story retail space at 1551 Broadway, currently the flagship store of American Eagle Outfitters Inc. Photo Credit: timessquarenyc.org

A new tenant is being sought for the four-story retail space at 1551 Broadway, currently the flagship store of American Eagle Outfitters Inc. As reported by Bloomberg News, an anonymous source said real estate brokers are already marketing the Times Square mega-store. The property includes a multistory digital billboard, made with weather-resistant LED panels, which is a prime advertising spot visible to hundreds of thousands of visitors daily. The sculptural, 12-faceted display system which includes a 125-ft. tower, was designed by the The Barnycz Group and currently serves as a dynamic dimensional canvas for American Eagle content.

American Eagle Outfitters, the retail apparel company founded in 1977, has been faring well and reporting stable income and operating revenues. It also boasts the expansion of its Aerie lingerie line. However, citing a generally weak market, the Pittsburgh-based company reported lower-than-expected earnings last month, and said it will be closing weaker stores. “We have significant lease flexibility that enables us to exit less-desirable locations over time,” Chief Financial Officer Robert Madore told analysts. “We’ve closed approximately 130 underperforming stores since 2015 as we continued to strengthen our fleet.” As of their 2018 annual report, the retailer had 934 American Eagle Outfitters stores with 115 Aeries, employing an estimated total of 45,000 people.

Located in the heart of the busy tourist district, AE’s flagship store has seen its rent jump to an average of $1,675 per square foot, as per a report by commercial brokerage Jones Lang LaSalle Inc. In 2007, when the company first signed on the lease, the rent was less than $900.

AE’s lease at 1551 Broadway runs through February 2024. The 30,000 square feet store is the brand’s largest. The store’s design follows cues from New York City, with exposed brick walls, concrete and subway tiles and even a scaffolding system that holds the denim wall modelled after the scaffolding on NYC buildings. The men’s store on the ground level features a 27-foot denim bar, showcasing each AEO denim fit on a leg form. There is also a double-sided massive 32-foot denim wall with every fit, wash and size.

While Times Square’s famously oversized stores have not been as hard hit as other pricey neighborhoods including Fifth Avenue, asking rents may be starting to decline. Some of the district’s biggest long-time stores, including Toys “R” Us, have shuttered their stores in recent years. Forever 21, which filed for bankruptcy in September, also cutting the lease short for their Times Square flagship store. Landlord Vornado Realty Trust is cutting rents to fill the void, as per Bloomberg News.

A rep for American Eagle Outfitters declined requests for comment on the Times Square space. A rep for CBRE Group Inc., which is the broker for the space, also did not comment.