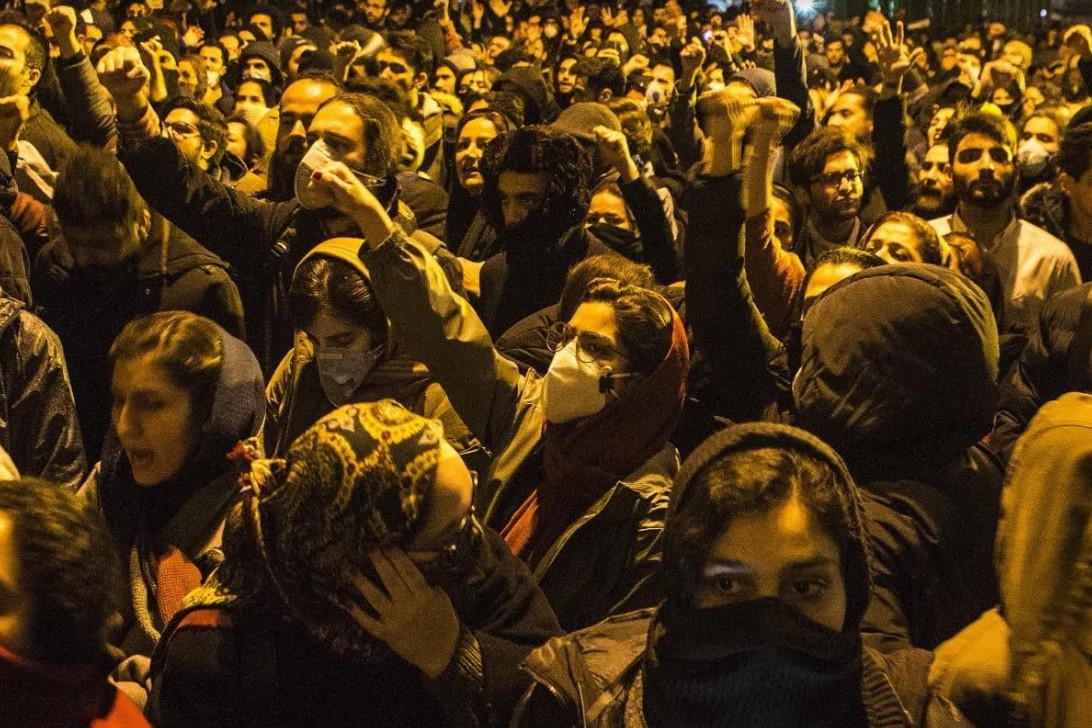 Anti-government protests in Iran erupted again Sunday night in Iran for a second day of demonstrations against the military, which first denied and then admitted it mistakenly shot down a civilian Ukrainian plane, killing all 176 on board. Photo: Xinhua

Anti-government protests erupted again Sunday night in Iran for a second day of demonstrations against the military, which first denied and then admitted it mistakenly shot down a civilian Ukrainian plane, killing all 176 on board.

“They are lying that our enemy is America, our enemy is right here,” one group of protesters chanted outside a university in Tehran.

Videos showed protesters at other locations in the capital and in other Iranian cities.

Black-clad police, wearing protective riot helmets, massed in iconic Azadi Square south of the city center and at other landmarks. The police were equipped with water cannons and batons and brandished paintball guns, potentially to mark protesters to authorities. But there were no immediate reports of any crackdown on the protests.

In an emotional speech before parliament, the head of the Revolutionary Guard apologized for the missile attack on the Ukraine International Airlines jet and insisted it was a tragic mistake.

“I swear to almighty God that I wished I was on that plane and had crashed with them and burned, but had not witnessed this tragic incident,” said Gen. Hossein Salami. “I have never been this embarrassed in my entire life. Never.”

“To the leaders of Iran – DO NOT KILL YOUR PROTESTERS,” Trump said on Twitter. “Thousands have already been killed or imprisoned by you, and the World is watching. More importantly, the USA is watching. Turn your internet back on and let reporters roam free! Stop the killing of your great Iranian people!”

Iranian Foreign Minister Mohammad Javad Zarif, on Twitter, expressed “profound regrets” and apologized for the shoot-down of the Ukraine International Airlines jet. But he contended that ‘Human error at time of crisis caused by US adventurism led to disaster.”

U.S. national security adviser Robert O’Brien rejected Zarif’s claim in an interview on the Fox News Sunday talk show, saying, “First they cover it up,” then claimed the civilian aircraft veered toward a military base. He said Iran needs to investigate the accident, apologize for it, pay compensation to the victims’ families and “make sure it never happens again.”

On Saturday in Tehran, protesters gathered near universities and called for the resignation of the country’s supreme leader, Ayatollah Ali Khamenei, and chanted, “Down with liars!” and “Death to dictator!”

VOA’s Persian News Service reported protests also spread to other areas of Iran, including the country’s third-largest city of Isfahan.

Saturday’s demonstrations came two months after Iran cracked down on massive anti-government protests, brought about by an increase in the price of subsidized gasoline in November. Iran declined to release a death toll at the time, but Amnesty International said more than 300 people had been killed.

IRGC aerospace commander Amir Ali Hajizadeh said on state television, “I take full responsibility and I will obey whatever decision is taken.” He said he “wished” he “were dead” when he learned about the fate of the aircraft. “That night we had the readiness for all-out war,” Hajizadeh said. He added that the Revolutionary Guard asked that commercial fights be canceled but that the request was not granted.

Iranian officials told the truth about the circumstances of the crash only after it became apparent that the evidence on the ground from the doomed flight would not allow the Iranians to continue to lie, according to the New York Times newspaper.

The plane crashed Wednesday, but Iran did not reveal that it had shot down the aircraft until Saturday.

A Ukrainian official told The New York Times that its experts had gathered information at the crash site “despite apparent Iranian efforts to complicate the investigation, including by sweeping debris into piles rather than carefully documenting it.”

Ukraine says the Kyiv-bound doomed flight took off as usual with no word to the crew about the ballistic missile attack.

Oleksiy Danilov, the Ukrainian official heading the crash investigation, told The New York Times that the Iranians could no longer lie about the circumstances of the crash when “Ukrainian investigators found fragments of the top part of the airplane cabin that had been pierced by what appeared to be the shrapnel of a missile warhead.”

British Foreign Secretary Dominic Raab said, “The arrest of our ambassador in Tehran without grounds or explanation is a flagrant violation of international law.

“The Iranian government is at a cross-roads moment. It can continue its march towards pariah status with all the political and economic isolation that entails, or take steps to deescalate tensions and engage in a diplomatic path forwards,” Raab said.

U.S. State Department spokeswoman Morgan Ortagus tweeted about the detainment: “This violates the Vienna Convention, which the regime has a notorious history of violating. We call on the regime to formally apologize to the UK for violating his rights and to respect the rights of all diplomats.”

The U.S. called on Iran to apologize to Macaire, who was reported to be “safe and well” after being released from custody. (VOA News)