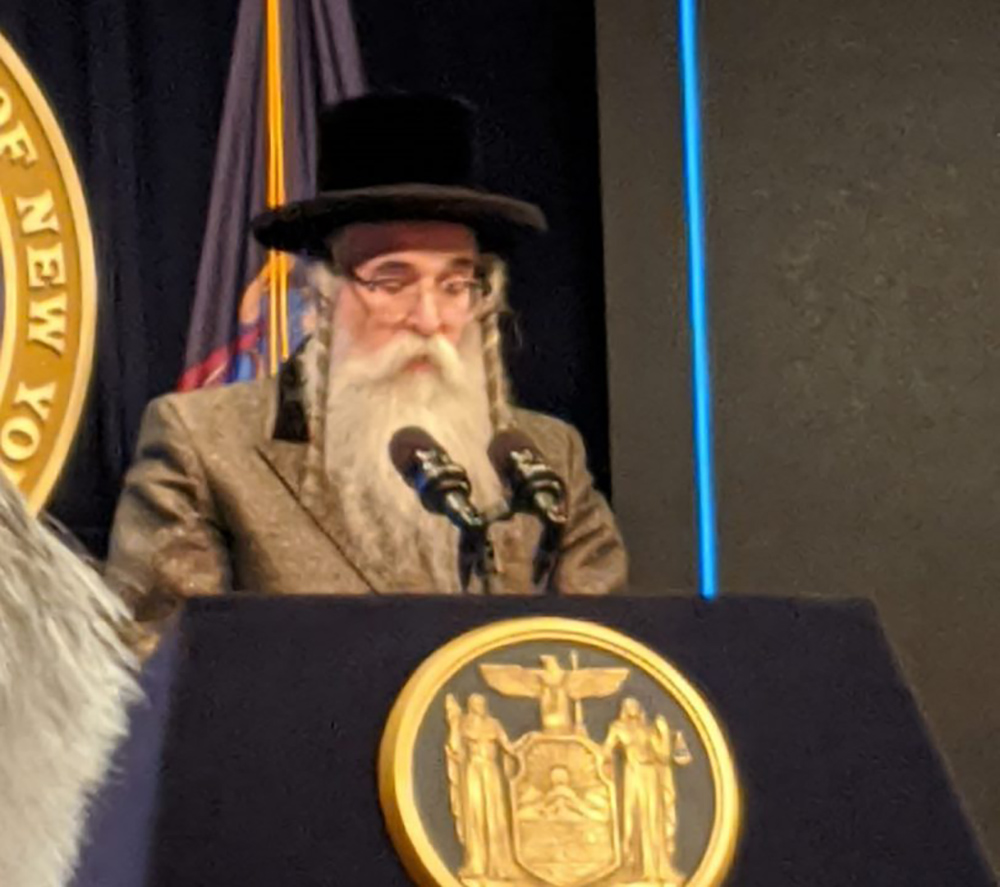 Rabbi Chaim Rottenberg delivering the invocation by the Governor’s State of the State Message in Albany, NY, on January 8, 2020. Photo Credit: HaModia

History was made on Wednesday in the Empire State when a Chassidic rabbi, whose home was the target of an anti-Semitic attack during Chanukah delivered the invocation at the State of the State annual address, delivered by New York State Governor Andrew M. Cuomo. Rabbi Chaim Rottenberg, of the Forshay district of Monsey took the podium in Albany and spoke of the stabbing attack that took place at his home.

During the attack, Grafton E. Thomas, 37, an African-American male, burst into the rabbi’s home at 10 pm on Saturday evening, December 28th at the conclusion of Shabbos. Rabbi Rottenberg and his congregants had just concluded the lighting of the Chanukah menorah and were preparing to partake in a Melava Malka and Chanukah party at the adjacent synagogue. According to eyewitnesses, Thomas wore a mask when taking a machete out of its holder. He then began to stab those in sight. Five people were rushed to area hospitals for treatment and Thomas was eventually arrested by police in Manhattan later that evening. 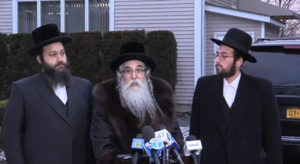 Harav Chaim Rottenberg delivering a statement in front of his home in Monsey, NY, after delivering the invocation fo rthe governor’s State of the State Message. (screencap lohud)

The shock and horror of this crime predicated on visceral hatred of Jews resulted in elected officials and community leaders finally addressing the alarming escalation of anti-Semitism that has plagued New York for the last several months. In December alone, there were fourteen recorded incidents of anti-Semitic attacks and assaults; mostly among Orthodox Jewish communities in Brooklyn and one in Jersey City.

In his invocation, Rabbi Rottenberg recalled the nightmarish attack that is etched in the minds of those affected by it and many others as well.

I will never forget how, in the face of tragedy, we were blessed by G-d. The miraculous fashion in which the attacker was subdued, which limited what could have been a far worse and fatal event. We pray that Divine Providence should continue protecting us from evil forces who are out to harm us physically, or from those who are out to attack our Hassidic traditional way of life and system of education.”

Of Governor Andrew M. Cuomo, Rabbi Rottenberg expressed his profuse appreciation (Hakaras HaTov) for the governor’s complete support and tangible assistance during this most difficult time.

He said, “We ask you, Merciful Father, bless our Governor who has committed himself to protect our way of life and broaden security. Guide him in eradicating hate at its source and across all platforms, and help him promote and instill the values of tolerance and appreciation among all our neighborhoods and communities, who may look different, talk in a different language or raise and educate their children according to their unique ancestral traditions.

Bless this great state of New York and its people and guide this nation through these troubled times, toward a more peaceful world.”

Subsequent to the delivery of his profound remarks at the invocation, Rabbi Rottenberg held a press conference outside his Monsey home. This marked the occasion of the first time that Rabbi Rottenberg has spoken publicly about the attack. He emphasized that despite the fact that he lauded Governor Cuomo in his invocation, he does not necessarily concur with all of his policies, particularly regarding those touching upon the social agenda he has set forth for the state.

“For many Orthodox Jews, our congregation included, there is much to be rejected in the contemporary world’s embrace of freshly minted dogmas in assorted moral realms. My participation at the State of the State does not in any way imply my unilateral support of all current issues up for debate. That being said, today is neither the time nor the place to dwell on any negatives. We hope for the opportunity to at some point, discuss these moral issues with the Governor,” Rabbi Rottenberg declared.

Reaching out in a tone of true peace, reconciliation, and religious and racial tolerance, Rabbi Rottenberg said, “When the forces of hatred strike, we must counter with the power of love and goodness towards all humanity. When darkness hits, let the forces of light prevail.

Although we, the Hassidic people of Rockland and across New York State, may look different, dress differently, speak a different language, and choose to educate our children according to our traditions, we, like the many diverse people of Rockland county are all created in the image of G-d. I stand here before you stretching out my hand for peace and unity. Let us put our differences aside and bigotry behind us and work side by side to eradicate hatred.

To all our neighbors, fellow Rockland County residents and elected officials, I implore you: let us take this moment and create change, unite in reconciliation and start a new page with love and peace. Our diversity is what makes our country so great. We cannot allow seeds of hatred to destroy that. Together, we must leave the past behind and work towards a peaceful future.”

Appealing to his fellow Jews and especially younger members of the Orthodox Jewish community, Rabbi Rottenberg exhorted those listening to his words to make a concerted efforts not to politicize the horrific spate of anti-Semitic attacks as well as resist efforts to convince them to arm themselves for the purpose of self-defense.

“I appeal to fellow Jews, especially our youth, please do not allow this tragic event to arouse feelings of reprisal or the idea of taking up arms in self-defense, Rabbi Rottenberg said. “We are certainly obligated to take the basic measures and precautions for the safety of our homes, our congregations, our schools and our public places. However, ultimate law and order must remain in the trained hands of our dedicated law enforcement professionals, who on a daily basis place their lives in potential harm’s way to ensure our safety and security.”

Yeshiva World News has reported that the question to HaRav Kanievsky was specifically framed around having “armed guards” at synagogues, due to the increase in antisemitic incidents.

A Breitbart report indicated that HaRav Kanievsky stated his opposition to posting guards at religious venues but made clear that worshippers were permitted to carry firearms to the synagogue if the purpose was saving life.

The question was followed by asking if it is allowable to carry guns to synagogue even if a threat against worshippers is only potential, rather than “immediate.” Harav Chaim said it is allowable, according to a Breitbart report.

It is apparent that Rabbi Rottenberg and HaRav Kanievsky differ greatly on the issue of whether it is permissible for Jews to carry guns; even for the purposes of self-defense.