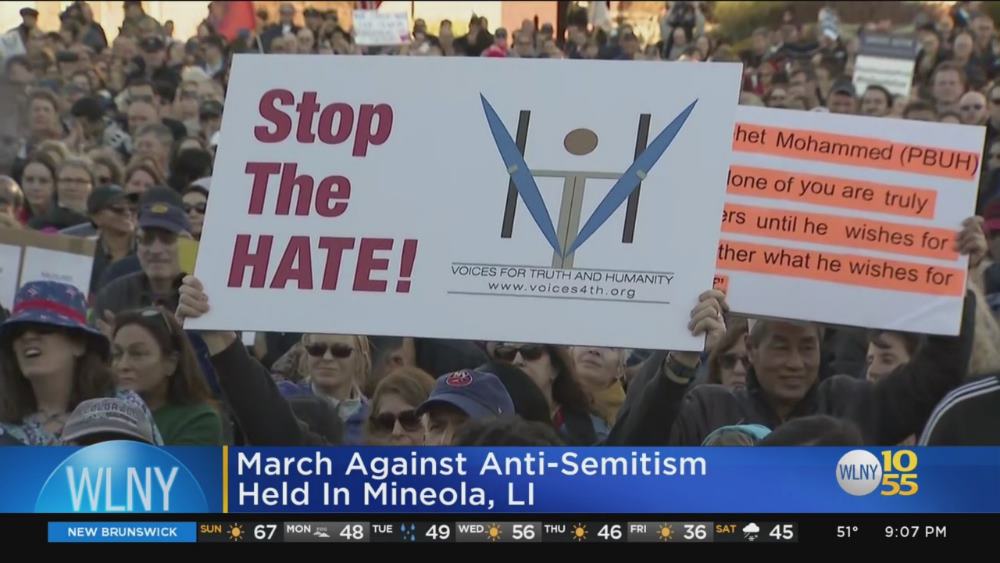 Nearly 3,000 people turned out in Mineola yesterday to raise their voices against anti-Semitism. Photo Credit: CBS

Nearly 3,000 people turned out in Mineola yesterday to raise their voices against anti-Semitism.

The interfaith gathering spanned more than a hundred groups, and included elected officials from both political parties.

The event was the de facto kickoff for a new two-county coalition. Its goal is to craft ways to fight against hate crime on Long Island.

The march was intended to “send a clear message in one voice: Long Islanders of all faiths and backgrounds stand united with our Jewish community and against Anti-Semitism,” said Nassau County Executive Laura Curran

The march was organized by the Islandwide Task Force Against Anti-Semitism and Symbols of Hate, a coalition formed last month in response to the rise in hate crimes, reported longislandpress.com.

According to the Anti-Defamation League, 1,879 incidents of Anti-Semitism were reported nationwide in 2018 and in the past year anti-Semitic crimes have increased by 21 percent in New York City.

Veteran Republican Congressman Peter King noted on Twitter that he was “Proud to March in solidarity with thousands of Long Islanders in Mineola against anti-Semitism. We must work together to stand up to anti-Semitism, bigotry, and hatred,” U.S. Sen. Charles Schumer, whose family members perished in the Holocaust, tweeted on Sunday. “I am so proud to stand with everyone at the Long Island March Against Anti-Semitism. #OneLongIsland.”

Another tweet, this one from New York Attorney General Letitia James, told those involved that she was “proud to join Long Island to march against anti-Semitism to reject these despicable acts of hate here and across our entire state. We will continue to march and take real action to bring this form of hate to an end.” She added, “It’s important that we know our history. It was Jewish storekeepers who allowed black people not to go to the back door, but through the front door, and it was the blood of Jewish people that died for my freedom and your freedom. We stand together in love and recognizing that hate will not be tolerated in Long Island or anywhere in the states.”

Added U.S. Sen. Charles Schumer (D-NY), “What history has taught us is this: If we speak out, we will prevail. Let us continue to speak out, to march, and to act together.”

“The task force and the march are in response to horrific attacks in Brooklyn, Monsey, and Jersey City, as well as incidents of Anti-Semitic graffiti at the Holocaust Memorial and Tolerance Center of Nassau County in Glen Cover and synagogues in Huntington,” reported Long Island Business News.