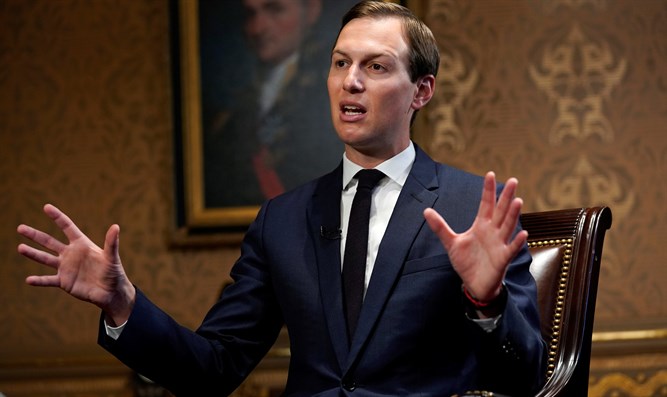 Jared Kushner, President Trump’s senior adviser and son-in-law, as well as one of the authors of the peace plan dubbed the “Deal of the Century”, is calling on the Palestinian Authority to resume peace negotiations with Israel.

Trump’s son-in-law urges Palestinian Arabs not to miss the opportunity in the US peace plan “which may never come again”.

Jared Kushner, President Trump’s senior adviser and son-in-law, as well as one of the authors of the peace plan dubbed the “Deal of the Century”, is calling on the Palestinian Authority to resume peace negotiations with Israel.

In an op-ed published on the CNN website on Wednesday, Kushner wrote, “Our vision for peace is by far the most comprehensive and realistic plan that has ever been released. Through this plan, we have established a clear path to a final peace agreement that meets the core requirements of both the Israeli and Palestinian people.”

“The foundation for our vision is a two-state solution and mutual recognition. It calls for the creation of an internationally recognized state of Palestine that is connected, independent and comparable in size to the entire West Bank and Gaza today. To reach this historic milestone, the Palestinians must meet certain conditions, including agreeing to recognize Israel as the nation-state of the Jewish people, permanently settling the question of Israel’s national identity. Under our vision, no Israelis or Palestinians will be uprooted from their homes or denied their civil rights,” he wrote.

“The plan addresses the status of Jerusalem, taking into account the historic connection of Jews and Muslims to that city. The ancient Jewish capital in Jerusalem will remain united under Israel. The future state of Palestine will have a capital, including parts of East Jerusalem east of the security barrier.”

Kushner noted that “[i]f Israel and the Palestinians reach a final agreement, President Trump will be proud to stand with Palestinian President Mahmoud Abbas when we fly the American flag over the US Embassy to the state of Palestine for the first time.”

“Past experience,” he pointed out, “has shown us that no peace agreement can be successful unless it fully meets Israel’s security requirements. Our plan does not ask Israel to take additional security risks. Rather, we have outlined a mechanism that will allow Israel to reduce its security footprint in the West Bank over time while maintaining overriding security responsibility. This process will be based on a single guiding principle: the more Palestinians do, the less Israel will have to do.”

“Our plan economically empowers the Palestinians, while helping fully integrate Israel into the region. It includes a historic $50 billion economic package for the Palestinians and other measures designed to ensure Palestinian businesses can compete freely and fairly in the global economy. It will also serve as a platform for the United States to continue working to advance normalization between Israel and Arab states, unlocking massive economic benefits and helping ensure stability across the region,” continued Kushner.

He noted that Prime Minister Binyamin Netanyahu and Blue and White chairman Benny Gantz “have both shown immense courage by publicly coming forward to support our vision. This means for the first time, the leaders of Israel have not only endorsed the creation of a future Palestinian state, but a map and a process. History will note this breakthrough was only possible because of the President’s uncompromising support for Israel and its security.”

In conclusion, he wrote, “This is a pivotal moment. We can choose to work together now to build on this unprecedented opportunity or return to the same old talking points and positions that lead us to where we are today. Palestinians may have issues with aspects of this plan. But to address them, they should identify the areas they would like to improve and agree to negotiate with Israel. Failure to do so would be to miss an opportunity which may never come again.” (INN)