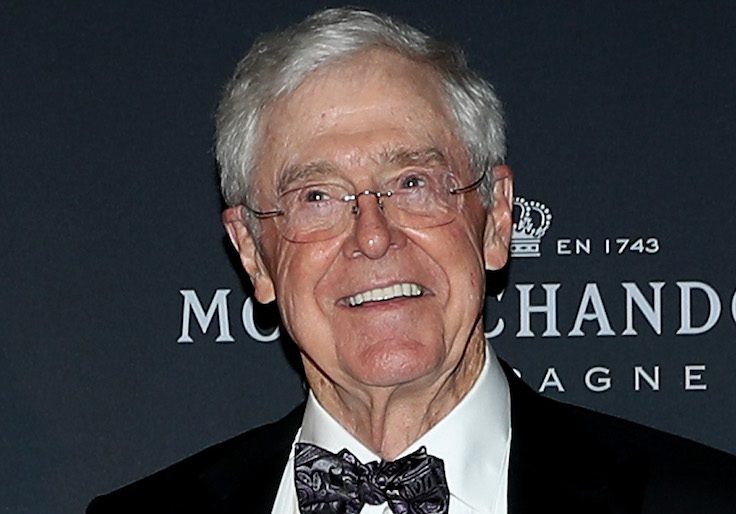 A spokesman for the Charles Koch Institute said Wednesday that accusations a new think tank supported by Koch is harboring anti-Semites are "absurd" and "grossly mischaracterize the positions" of the organization. Photo Credit: Getty Images

A spokesman for the Charles Koch Institute said Wednesday that accusations a new think tank supported by Koch is harboring anti-Semites are “absurd” and “grossly mischaracterize the positions” of the organization. But he declined to defend the statements of affiliated scholars questioning the loyalty of American Jews, suggesting that some of them comprise a “fifth column” inside the United States, and promoting a conspiracy theory that Israel conducted a “false-flag” chemical attack on Syrian civilians.

Will Ruger, the vice president for research and policy at the Charles Koch Institute, issued a lengthy statement in the wake of a Free Beacon story detailing a litany of controversial statements targeting Israel and American Jews made by experts and scholars who hold prominent posts at a new think tank, the Quincy Institute for Responsible Statecraft, funded by Koch and the liberal philanthropist George Soros.

“Recent accusations and insinuations against the rising transpartisan effort to rethink U.S. foreign policy are absurd and grossly mischaracterize the positions we and others hold,” the statement said. “Anti-Semitism is abhorrent, and we reject all forms of bigotry.”

Ruger told the Free Beacon his statement was not a response to the Beacon’s Tuesday report, but rather “an effort to set the record straight given the criticism from a few who continue to advocate for a failed foreign policy.”

Ruger did not respond to a request for comment about whether the foundation considers a series of statements from Quincy Institute fellows bigoted or anti-Semitic.

Those statements include a 2013 accusation from Lawrence Wilkerson, a nonresident fellow at the institute, that Syria’s use of chemical weapons on innocent civilians “could’ve been an Israeli false flag operation.”

Wilkerson, who served as chief of staff for Colin Powell during his tenure at Foggy Bottom, also argued in 2007 that “the Jewish lobby in America” had been the primary driver of the Bush administration’s decision to invade Iraq in 2003.

Paul Pillar, a Quincy Institute expert on intelligence and terrorism, has also accused the Republican megadonor and casino magnate Sheldon Adelson of greater loyalty to Israel than the United States. Pillar argued in a 2014 essay that Israel is Adelson’s “first love among countries,” and Israel’s “Likud Party,” rather than the GOP, his “first love among political parties.”

The charge of dual loyalty—that Jews are loyal to their coreligionists rather than to the country in which they live—spread throughout Europe in the 19th century and came to a head in 1894 when Alfred Dreyfus, a French Army officer and a Jew, was falsely charged with treason for passing military secrets to the Germans.

Others affiliated with the Quincy Institute include Chas Freeman, who authored the organization’s first policy brief last month and has suggested that American Jews and Jewish organizations comprise a “fifth column” inside the United States.

Freeman’s nomination to lead Barack Obama’s National Intelligence Council was scuttled in 2009 when controversy erupted over the fact that the organization he led at the time, the Middle East Policy Council, received funding from the Saudi government and had defended the Chinese government’s violent attack on student protesters in Tiananmen Square. Freeman had written, “I do not believe it is acceptable for any country to allow the heart of its national capital to be occupied by dissidents intent on disrupting the normal functions of government” and that the real mistake of the Chinese government was its failure “to nip the demonstrations in the bud.”

Forced to withdraw his nomination, Freeman blamed “the Israel lobby” and, in a speech in Moscow later that year, argued that Israel enjoyed the support of a “‘fifth column’ of activist sympathizers” in the United States, citing “many American rabbis” as well as the Jewish Agency for Israel.

Andrew Bacevich, the president of the Quincy Institute, declined to comment on whether the organization stands by these remarks but said it would not be highlighting the influence of pro-Israel donors and organizations. Rather, the institute would promote “restraint as a central principle of U.S. foreign policy.” (Washington Free Beacon)