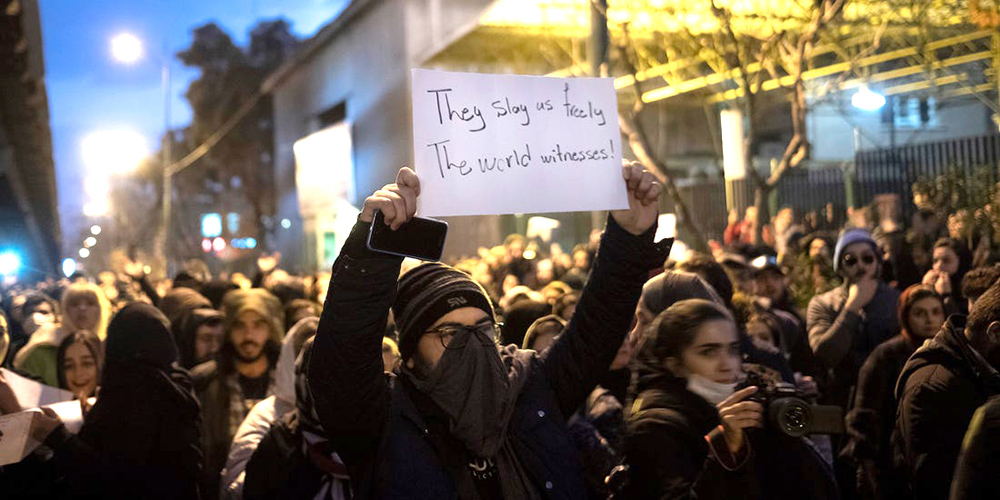 On Monday, hundreds of protesters in Iran refused to trample US and Israeli flags and denounced others who did as rallies continued against the regime for the downing of a Ukrainian passenger jet; killing all 176 people on board. "It was the U.S. that caused such an incident to take place," Iran's state-controlled news agency Tasnim quoted President Hassan Rouhani as saying. Photo Credit: Morteza Nikoubazi/ Getty Images

Iranian President Hassan Rouhani said on Tuesday that the shooting down of the Ukrainian jetliner last week has its “root causes” in US actions. Iran has vowed to fully and openly investigate the firing of the surface-to-air missile that downed the plane, killing all 176 people on board, according to a CBS News report. The plane was bound for Kiev in Ukraine. 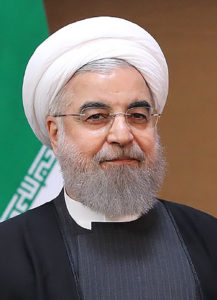 “It was the U.S. that caused such an incident to take place,” Iran’s state-controlled news agency Tasnim quoted President Hassan Rouhani as saying. The Iranian regime has blamed the Trump administration for ratcheting up tensions with the controversial decision to kill senior Iranian military commander Qassem Soleimani in a January 2 drone strike in Baghdad. Photo Credit: Wikipedia

“It was the U.S. that caused such an incident to take place,” Iran’s state-controlled news agency Tasnim quoted President Hassan Rouhani as saying. The Iranian regime has blamed the Trump administration for ratcheting up tensions with the controversial decision to kill senior Iranian military commander Qassem Soleimani in a January 2 drone strike in Baghdad.

According to the CBS News report, Iranian forces shot the plane down hours after launching a barrage of ballistic missiles at military bases in Iraq housing hundreds of U.S. forces, in retaliation for the killing of General Qassem Soleimani. Officials in Tehran have said their forces were on high-alert for any U.S. response to the missile attack, and the operator who fired on the plane believed it was an incoming American missile.

CBS also reported that Virginia Senator Tim Kaine (D) said he has at least 51 votes to support a bipartisan resolution asserting that President Trump must seek approval from Congress before engaging in further military action against Iran. Kaine, who was Hillary Clinton’s running mate in the 2016 presidential race, said the Senate could vote as soon as next week on the measure.

Republican Senators Mike Lee of Utah and Rand Paul of Kentucky have co-sponsored the resolution, according to DBS News and GOP Senators Todd Young of Indiana and Susan Collins of Maine said Tuesday they will support it. The bipartisan measure “clearly states that America can always defend itself,” against attack from Iran or any other country, Kaine said, “but we don’t think that this president — or any president — should send our troops into war without a vote of Congress.”

Senate Majority Leader Mitch McConnell and other Republicans oppose the resolution, saying it would send the wrong message to allies. The House passed a separate war powers resolution last week.

On Monday, hundreds of protesters in Iran refused to trample US and Israeli flags and denounced others who did as rallies continued against the regime for the downing of the Ukrainian passenger jet, according to a NY Post report.

Videos and reports emerged Sunday showing the crowds deliberately walking around the edges of the massive flags painted on the pavement of a university in Tehran.

Those who did walk across the Stars and Stripes and the Star of David were immediately pointed at and booed, with the crowd chanting “shame on you,” according to the Post report.

Many of the protesters shouted, “Our enemy is Iran, not America.” 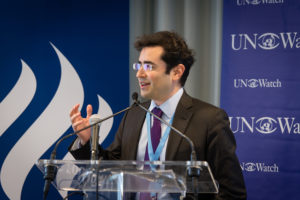 Hillel Neuer, the executive director of the human rights group UN Watch, tweeted out a video of the crowds taking pains from treading on the flags on Sunday. “These courageous Iranian students who refuse to trample the U.S. & Israeli flags represent the hope for a better Middle East. Engage with and promote them instead of their oppressors, and maybe Iran-backed wars & terror across the region will end,” he posted. Photo Credit: UN Watch

Hillel Neuer, the executive director of the human rights group UN Watch, tweeted out a video of the crowds taking pains from treading on the flags on Sunday.

“These courageous Iranian students who refuse to trample the U.S. & Israeli flags represent the hope for a better Middle East. Engage with and promote them instead of their oppressors, and maybe Iran-backed wars & terror across the region will end,” he posted.

In his latest tweet in support of the protests, President Trump on Monday praised Iranians who were seen in other online footage walking around a giant U.S. flag painted on the ground, as was reported by VOA. Iranian authorities have placed such images around the country to encourage people to walk over the U.S. flag as a sign of disrespect.

Trump had tweeted several other supportive messages in Farsi on Saturday and Sunday, marking the first time he had tweeted in the Persian language, as was reported by VOA.

President Trump also praised the students Friday on Twitter for not trampling the flags. “Wow! The wonderful Iranian protesters refused to step on, or in any way denigrate, our Great American Flag,” Trump stated. “It was put on the street in order for them to trample it, and they walked around it instead. Big progress!”

“To the leaders of Iran–DO NOT KILL YOUR PROTESTERS,” Trump said on Twitter. “Thousands have already been killed or imprisoned by you, and the World is watching. More importantly, the USA is watching. Turn your internet back on and let reporters roam free! Stop the killing of your great Iranian people!”

In an interview with VOA Persian on Monday, State Department spokeswoman Morgan Ortagus said there had been an “explosion” of re-tweets and likes of the president’s Farsi posts.

“By the president tweeting in Farsi over this weekend, not just in English, and by Secretary Pompeo tweeting as well, we want to make sure that we are using our platform here in the U.S. government to shine a light on these protests,” Ortagus said.

“If (Iran’s rulers) decide to try to kill innocent protesters again, to imprison thousands of people peacefully protesting, to cut off the Internet — we want them to know that they’re not going to get a free pass, that we are watching, the world is watching, and we will bring it to light when that happens,” she said.

VOA reported that hundreds of students at a prestigious Iranian university have openly denounced their Islamist rulers in a third day of protests on Monday since the government admitted to accidentally downing a Ukrainian passenger jet in which 176 people were killed.

In several video clips vetted by VOA, the students at Tehran’s Sharif University of Technology, a top engineering school, appeared to be gathered in an outdoor location on campus on Monday, chanting slogans and listening to several speakers criticize the government. VOA could not independently verify the authenticity of the clips.

In one video, the students chanted, “They killed our elites and replaced them with mullahs.”

Iranian officials told the truth about the circumstances of the crash only after it became apparent that the evidence on the ground from the doomed flight would not allow the Iranians to continue to lie, according to a New York Times report.

The plane crashed Wednesday, but Iran did not reveal that it had shot down the aircraft until Saturday.

A Ukrainian official told The New York Times that its experts had gathered information at the crash site “despite apparent Iranian efforts to complicate the investigation, including by sweeping debris into piles rather than carefully documenting it.”

Ukraine says the Kyiv-bound doomed flight took off as usual with no word to the crew about the ballistic missile attack.

VOA reported that Oleksiy Danilov, the Ukrainian official heading the crash investigation, told The New York Times that the Iranians could no longer lie about the circumstances of the crash when “Ukrainian investigators found fragments of the top part of the airplane cabin that had been pierced by what appeared to be the shrapnel of a missile warhead.”

VOA reported that British Foreign Secretary Dominic Raab said, “The arrest of our ambassador in Tehran without grounds or explanation is a flagrant violation of international law. “

“The Iranian government is at a cross-roads moment. It can continue its march towards pariah status with all the political and economic isolation that entails, or take steps to deescalate tensions and engage in a diplomatic path forwards,” Raab said.

Iranian leaders’ belated acknowledgment of Western intelligence that they were responsible for the crash angered many Iranians, including students at a Tehran university whose Saturday night vigil for the crash victims turned into an anti-government rally, as was reported by VOA. Protests spread from Tehran to at least 18 other cities on Sunday, according to photos and video clips sent to VOA Persian and reports by other Persian-language media.

A video widely shared on social media showed demonstrators in Tehran fleeing tear gas fired by police late Sunday. Other online footage showed a woman on the ground with blood nearby as bystanders said she had been shot and tried to pick her up, according to the VOA report.

Iranian state media quoted Tehran’s police chief Gen. Hossein Rahimi as saying his officers had not opened fire on protesters and had acted with restraint.

Police maintained a strong presence in Tehran on Monday, according to a video clip vetted by VOA. It appeared to show officers in riot gear, some on horseback, along the city’s Azadi Street.

“You can see the Iranian people are in the streets — in astounding numbers in spite of enormous personal risk to themselves,” Secretary of State Mike Pompeo said in a Monday speech at the Hoover Institution.

“They’re burning posters and billboards with Soleimani’s face on them, and chanting ‘Soleimani is a murderer.’ They know he was one of the key architects of their oppression,” Pompeo added, referring to other widely shared video clips of Sunday’s protests.

Pompeo said the Trump administration has called on U.S. allies in the region and around the world to repeat President Trump’s tweeted demands for Iran not to harm the protesters. The U.S. has said Iranian security forces killed at least 1,500 people, mostly with gunfire, in a crackdown on nationwide protests last November.

“It’s important, as with any demonstration, that reports of the lethal use of force be fully investigated,” Dujarric said.

VOA reported that a second clip from Monday’s protest at Sharif University appeared to show a student shouting an angry message to the gathered crowd: “Our elites have left the country for good, and they (Iran’s leaders) blew them up. If it was not an international flight, we would never have been informed of the truth.”

In a third clip, another protester can be heard telling the students through a megaphone: “We want clarity. This country has been suffering from a lack of transparency for years. They lied to us through all these years. Excuse my language; they treat us like donkeys.” There were no reports of arrests or clashes at Sharif University.

Iranian Foreign Minister Mohammad Javad Zarif, on Twitter, expressed “profound regrets” and apologized for the shoot-down of the Ukraine International Airlines jet. But he contended that ‘Human error at time of crisis caused by US adventurism led to disaster.”

VOA reported that U.S. national security adviser Robert O’Brien rejected Zarif’s claim in an interview on the Fox News Sunday talk show, saying, “First they cover it up,” then claimed the civilian aircraft veered toward a military base. He said Iran needs to investigate the accident, apologize for it, pay compensation to the victims’ families and “make sure it never happens again.”