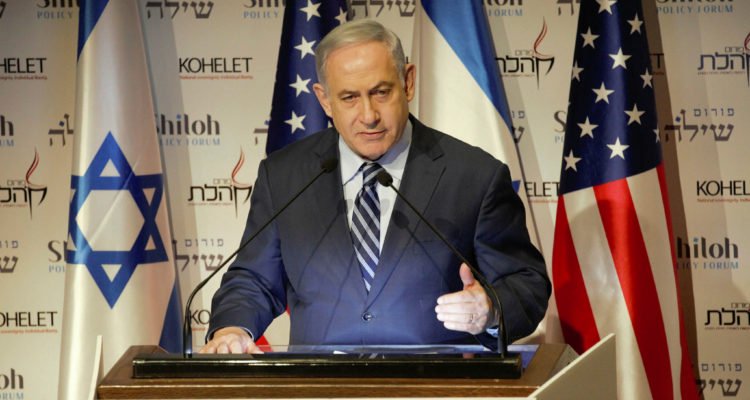 Prime Minister Benjamin Netanyahu called on European countries to reimpose sanctions on Iran “now” after France, Britain and Germany announced they have triggered the Iran nuclear deal dispute mechanism, which could lead to a renewal of further sanctions on Iran following the latter’s recent breaches of the 2015 accord. (Yehonatan Valtser/TPS)

“We know exactly what is happening with the Iranian nuclear program. I reiterate: Israel will not allow Iran to achieve nuclear weapons,” Netanyahu stated.

Prime Minister Benjamin Netanyahu called on European countries to reimpose sanctions on Iran “now” after France, Britain and Germany announced they have triggered the Iran nuclear deal dispute mechanism, which could lead to a renewal of further sanctions on Iran following the latter’s recent breaches of the 2015 accord.

The three countries, also known as the E3, stated Tuesday in a joint statement that “following Iran’s announcement in May 2019 that it would cease meeting some of its commitments under the JCPoA (Joint Comprehensive Plan of Action), we have sought to persuade Iran to change course. The E3 have worked hard to address Iran’s concerns and bring it back into compliance with its commitments under the nuclear agreement.”

“However, in the meantime Iran has continued to break key restrictions set out in the JCPoA. Iran’s actions are inconsistent with the provisions of the nuclear agreement and have increasingly severe and non-reversible proliferation implications,” the three powers charged.

“Instead of reversing course, Iran has chosen to further reduce compliance with the JCPoA and announced on Jan. 5 that ‘the Islamic Republic of Iran, in the fifth step in reducing its commitments, discards the last key component of its limitations in the JCPOA, which is the limit on the number of centrifuges’”, and that “the Islamic Republic of Iran’s nuclear program no longer faces any operational restrictions”, including on enrichment and enrichment-related matters,” they noted.

The three countries have “therefore been left with no choice, given Iran’s actions, but to register today our concerns that Iran is not meeting its commitments under the JCPoA and to refer this matter to the Joint Commission under the Dispute Resolution Mechanism.”

The Dispute Resolution Mechanism could reimpose sanctions on Iran at the United Nations (UN) within weeks.

He called on “all Western countries to impose snapback sanctions at the UN now.”

The UN Security Council is expected to discuss the three countries’ grievances, and if no resolution is adopted on the issue, the sanctions in all previous UN resolutions would be re-imposed, an action called “snapback sanctions.”

UK Foreign Secretary Dominic Raab told the House of Commons that ” Iran’s destabilizing activity should serve as a reminder to us all of the danger to the region, and to the world, if Iran were ever to acquire a nuclear weapon. We cannot let that happen.”

He underscored that Iran’s breakout time, the time it would need to produce enough fissile material for a nuclear weapon, is now falling, a matter of international cause of concern.”

According to an IDF estimate published on Tuesday, Iran could have enough material for one nuclear bomb by the spring.

“Iran has a choice. The regime can take the steps to de-escalate tensions and adhere to the basic rules of international law. Or sink deeper and deeper into political and economic isolation,” he stated. (TPS)