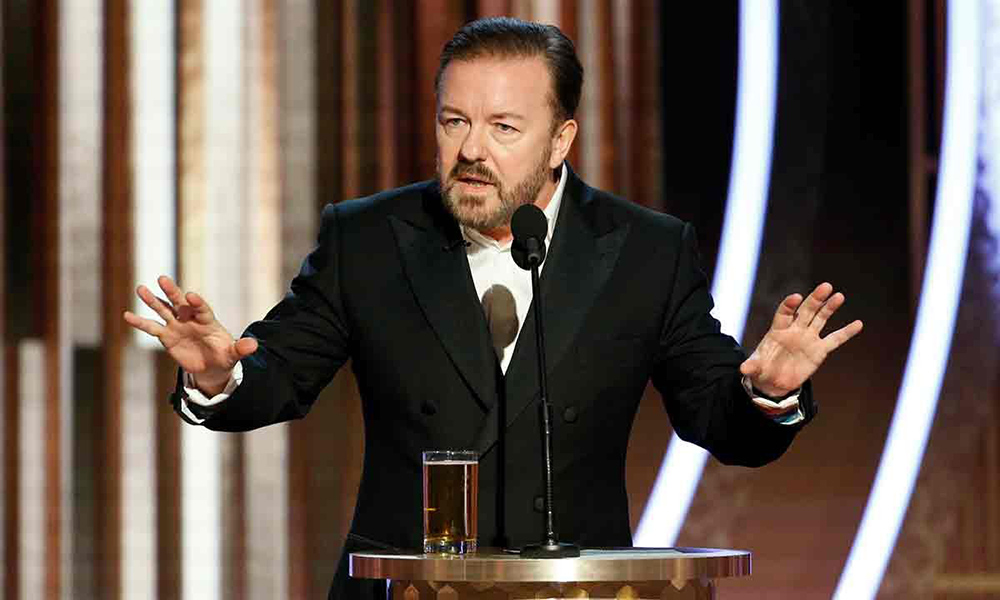 Golden Globes host Ricky Gervais wasn’t just speaking to millions of Americans on Sunday night’s broadcast; he was speaking for millions of Americans. Gervais ripped into the Hollywood elites sitting in his audience during his opening monologue, slamming them for virtue signaling while largely ignorant of real life. Photo Credit: Getty Images

Gervais ripped into the Hollywood elites sitting in his audience during his opening monologue, slamming them for virtue signaling while largely ignorant of real life.

“You know nothing about the real world. Most of you spent less time in school than Greta Thunberg,” he told the celebrities listening to him during the show. “So, if you win, come up, accept your little award tonight, come up, accept it, thank your agent and your God, and fuck off. No one cares about your views on politics or culture.”

The writer/producer also took aim at Apple, which recently debuted its Apple TV+. Knowing that Apple CEO Tim Cook was sitting in the audience, Gervais offered kind words about Apple’s The Morning Show, starring Jennifer Aniston and Reese Witherspoon. But then: “A superb drama about the importance of dignity and doing the right thing made by a company the at runs sweatshops in China. If ISIS started a streaming service, you all would be calling your agents.”

Reaction was, of course, immediate. “In a generally sour speech—Gervais had earlier emphasized how little he cared about the Golden Globes, and had suggested that Dame Judi Dench licks her nether regions—this was the acid-bomb climax. There was no conciliation, no wink in Gervais’s voice. It’s tempting to call this his moment of moral clarity, and it was likely aimed to be played on loop by Fox News and other outlets that make a habit of questioning Hollywood’s pieties. The passage is so close to saying the necessary thing about those pieties: that they’re often directed at broad causes rather than specific situations stars might actually have the power to change. But Gervais instead devolved into something more incoherent and regressive,” wrote theatlantic.com.

“When an infidel speaks against the most holy names of the woke Hollywood elite, their brethren within the left-wing mob instinctively wages jihad,” noted TheBlaze.com following the event. “And so it was for comedian Ricky Gervais after he mercilessly dismantled hand-wringers in the TV and movie industry during his Golden Globes monologue Sunday. See, the folks with the shocked faces in the audience weren’t the only ones miffed — their friends and admirers in the media were plenty offended, too…”

In the wake of the inevitable backlash, Gervais responded on Twitter, writing: “Thanks for all your amazing comments about my Golden Globes monologue. Best reaction ever and that means a lot to me. I had a blast but thank f—k it’s over, so I can get back to my real job of editing #AfterLife2 and touring #SuperNature. Make Jokes, Not War.”