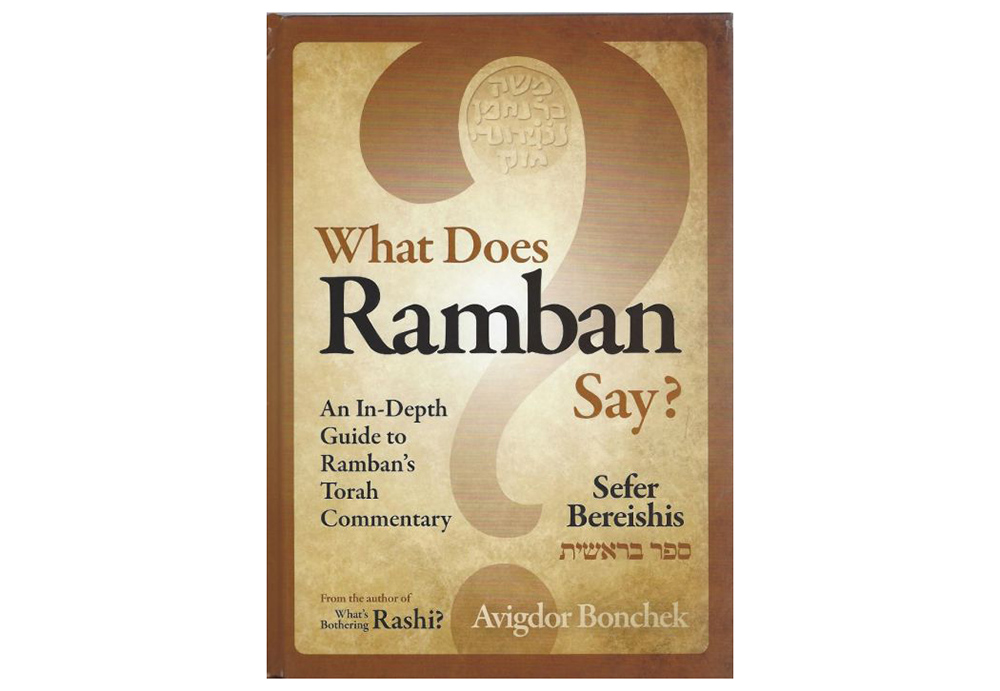 Understanding Ramban’s Torah commentary in depth is a challenge, as he uses pshat, drash, remez and sod in his exegesis–and writes lengthy interpretations. Rabbi Dr. Avigdor Bonchek’s new book opens the door in a scholarly but user friendly way. 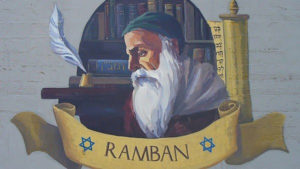 Ramban–or Nahmanides – wrote many works, but in his Torah commentary, wanted only to reach a better and deeper understanding of Torah verses and topics.

The nearly consecutive lives of three of Judaism’s greatest rabbinic scholars, whose writings remain the mainstays of Torah study, Rashi (1040-1105), Rambam (1135-1240) and Ramban (1194-1270) in chronological order, spanned only a little over two centuries.

The first, Rashi, wrote a wondrous commentary on the Pentateuch (and Talmud) aimed at explaining the intended meaning of Chazal’s (our Talmudic Sages) words. Rambam, also known as Maimonides, organized the enormous expanse of Oral and Written law according to topics and wrote the philosophic Guide to the Perplexed, among other writings. The third, Ramban–or Nahmanides – wrote many works, but in his Torah commentary, wanted only to reach a better and deeper understanding of Torah verses and topics. *

This is how Rabbi Dr. Avigdor Bonchek describes the three Rabbinic giants in his new book “What does Ramban say: An in depth guide to Ramban’s Torah Commentary” (Feldheim Publishing 2019). He then goes on to present us with the next stage: a better and deeper understanding of the Ramban’s commentary on those Torah verses and topics. 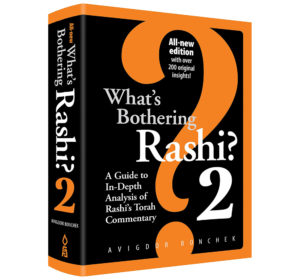 To achieve his goal, he explains, Ramban did not have one favored method of exegesis (as did Rashbam, for example) but turned to whatever he thought would be of help–pshat, midrash, halakha, aggadah and the esoteric mysteries of kabbalah (‘sod’), often arguing with Rashi and other commentator’s explanations. All methods of exegesis were valid in his eyes, the Torah a multi-layered work that could be explained on different levels.

If he deemed it necessary to explain a specific word or text, Ramban would use analytical tools (as he does in his proof of the age of Moses’ mother, Yocheved), bring examples from the wider context and other places in the Torah, and sometimes employ his partly historical, partly mystical saying “Maase Avot Siman Lebanim”- what the patriarchs did is a symbol to their descendants – itself a multi-layered phrase.

Ramban also brings psychological insights as part of his commentary, according to Rabbi Bonchek, previously famed for his books on Rashi (What’s Bothering Rashi series, Feldheim Press) where his approach was to discover what question lies behind Rashi’s choice of explanation. But Rashi’s explanations are brief, lending themselves to that question, while Ramban’s explanations, more often than not, are at least a page long, and Bonchek’s analyzes the explanation itself as well as looking for the reason it was needed.

For example, in last week’s parasha, Vayigash, when Jacob and Joseph meet again after over two decades, the verses contain pronouns in a way that makes it unclear about who is revealed to whom and who fell on whose neck. Ramban decides who is referred to by each pronoun. In doing so, writes Rabbi Bonchek, he shows logical and rational psychological insight in declaring that it is obviously the longing parent who is emotional at seeing the son he had given up for dead, while Joseph – now a mighty ruler – takes it in stride. 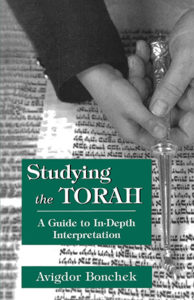 Another book by Rabbi Avigdor Bonchek, of blessed memory is: Studying the Torah: A Guide to In-Depth Interpretation

Perhaps that is why the author of this book seems to admire and identify so much with Ramban’s commentary – Rabbi Dr. Bonchek himself, who studied in Ner Yisrael and Ponovizh yeshivas, then earned a doctorate from NYU, was a sought-after clinical psychotherapist for decades in Israel, turning to the writing of scholarly Torah works after his retirement.

Bonchek writes with the instincts of an educator as well and the book, written parasha by parasha, is arranged so that a chosen part of Ramban’s commentary on a specific verse/topic is brought, questions are raised about what Ramban means and on what he bases this commentary. The reader is asked to posit his own answers before continuing to the author’s understanding of the commentary. This is followed, when suitable, by a closer look at the topic, an example of Ramban’s approach to midrash, to pshat, and sometime Ramban’s own understanding.

Note – Bonchek does not give his own explanation of Torah, but seeks, with great humility, to attempt to understand what Ramban means, what lies behind Ramban’s own explanations, how Ramban looks for what each midrash he uses is based on, how sometimes he shows that the midrash is actually pshat. He explains Ramban’s rationale for comparisons with other texts, and why in specific instances Ramban, famously, states clearly that he doesn’t agree with Rashi, Ibn Ezra or others.

Rabbi Bonchek, himself a brilliant, empathetic and modest Talmid Chacham, writes how Ramban’s humility shines through his explanations, remarking on how he prefaces many of them with the self-deprecating words “venire be’eynai – it seems to me”–”venachon be’eynai–it seems correct in my eyes.”

One of the chapters on this week’s parasha, Vayechi, centered on Yaakov’s last words, is an example of how the book is organized, although the headings brought below are not always the same in each parasha. The chapter begins with the verse to be discussed and the Ramban’s words on it, followed by headings whose content enlightens the reader step by step: 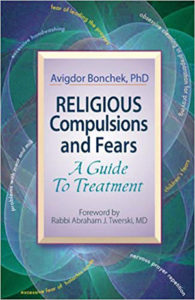 Rabbi Dr. Bonchek himself, who studied in Ner Yisrael and Ponovizh yeshivas, then earned a doctorate from NYU, was a sought-after clinical psychotherapist for decades in Israel, turning to the writing of scholarly Torah works after his retirement.

While leading the reader through these headings in Parashat Vayechi, Rabbi Bonchek explains how Ramban understands the psychology of someone who feels his death is not far off, in contrast to someone who is obviously ill and dying, using the wording of Yaakov Avinu’s call to Yosef. He brings the verse beginning “And the days of Yisrael neared death” and the Ramban on those words, then asks the reader what the Ramban’s question might be.

Bonchek then suggests a question – the Torah says Yaakov’s death approaching, but he does not die and actually blesses each of his sons, with his actual death mentioned much later. What does the Torah mean to say?

In the following paragraph, headed Understanding Ramban, Rabbi Bonchek writes: Ramban differentiates between the psychological sense one has that death is near and a physical illness that may be the immediate cause of death. He tells us that “old people may have an intuition that their time on earth is about to end. …not a physical illness, which would be apparent to others; it is rather a sapping of one’s physical strength…it is something only the person himself is aware of.”

Ramban “wants us to understand [that Yaakov] felt that final weakness and knew his death was near – near, but not necessarily imminent,. That explains, he says, how Yosef left his father and returned to his family…and, only later, when Yaakov was actually ill did Yosef return to him to receive his own [final] blessing.”

In the heading titled A Closer Look, Bonchek discusses why Ramban then brings the description of King David’s last days, where the verses are that as “the days of David neared death,” he summoned his son Solomon and told him “I am going the way of all the earth…” Rambam adds, “for he knew in his soul that it was so.”

As Rabbi Bonchek explains, the fact that King David used that expression, means that the way he felt was not apparent to others. Ramban was a doctor, and Rabbi Bonchek ends the chapter with an example of the insights that make this book so enlightening: “I see this comment as yet another example of Ramban’s down-to-earth knowledge of human psychology which, combined with his honed perception of the Torah’s words, give expression to this worldly knowledge.”

The next topic, Yaakov’s recollection of Rachel’s death, is accompanied by a midrash about why her grave is located on the side of a road. Ramban shows the basis for the midrash in the verse itself, and Rabbi Bonchek, expertly gets the reader to think about what that basis is, before expounding on it. **

Let us hope that this original, challenging book, a joy for anyone who studies the weekly parasha, will succeed in giving us the methodology to continue analyzing the Ramban on the rest of the Torah.

We will, unfortunately, have only the book on Breishit/Genesis to enjoy and with which to enrich our parasha study, as sadly, Rabbi Dr. Avigdor Bonchek was niftar (passed away) a short time ago. His dear wife, Shulamit, may she be granted long life, gave me his last book to review, since I had reviewed the second edition of the Rashi series.

It is an honor to add that the Boncheks and Sylvetskys were neighbors for a decade and have been good friends since the time both families made aliyah, even building a sukkah together during that first period in Israel. Rabbi Bonchek (Vic to friends)’s Torah knowledge, keen intelligence, analytical thinking and pleasant way of passing on his love for Torah will surely live after him in his writings, as well as through his wonderful family. May his memory be blessed.

*Our generation, more than previous ones, should be awestruck by the brilliance of these Torah luminaries, who mastered the entire Tanach and Talmud without the aid of computers, Google or even a typewriter at their disposal, ed.

**The question of site of the grave is discussed in Ramban as well, once he arrived in the Holy Land and saw for himself, but that is not brought in the chapter of Parashat Vayeshi, while the question of the meaning of “kivrat derech” appears in the parasha which describes her burial, ed.       (Israel National News)

Rochel Sylvetsky is Senior Consultant and op-ed and Judaism editor of Arutz Sheva’s English site. She is a former Chairperson of Emunah Israel,1991-96, was CEO/Director of Kfar Hanoar Hadati Youth Village, member of the Emek Zevulun Regional Council and the Religious Education Council of Israel’s Education Ministry as well as managing editor of Arutz Sheva (2008-2013). Her degrees are in Mathematics and Jewish Education.