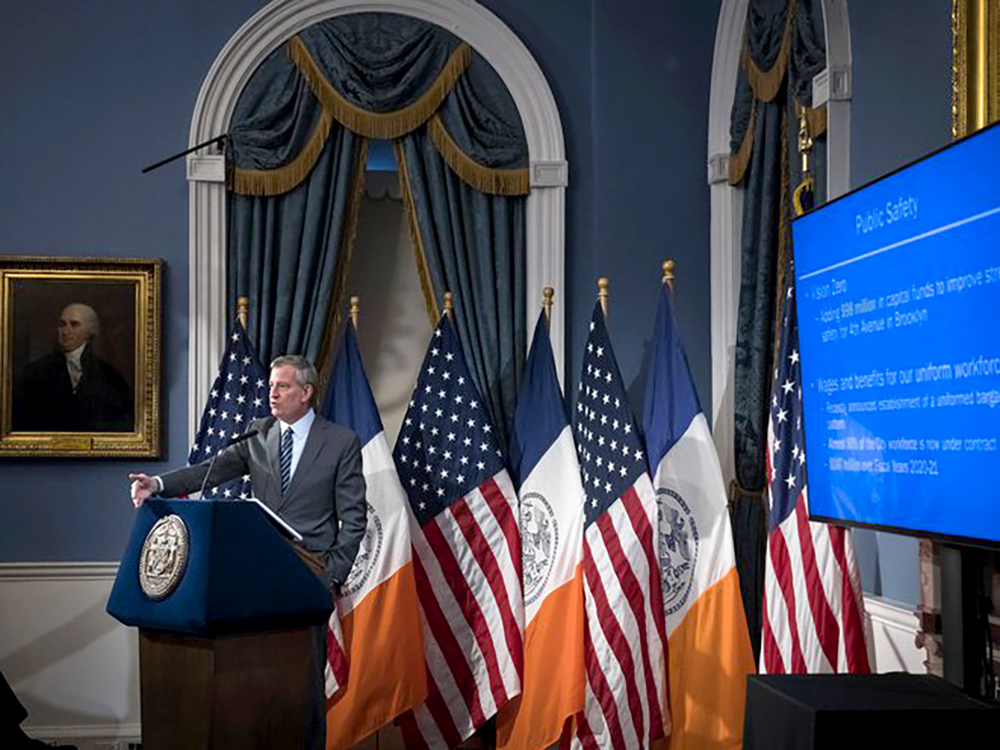 In deference to cost cutting measures and the humungous Albany $6 billion deficit, New York City Mayor rolled out his tentative fiscal year 2021 budget on Thursday. The budget package which includes $95.3 billion in spending is up less than 1 percent from the $94.6 billion the City Hall projected it will spend through fiscal 2020 at the end of June, according to a NY Post report.

Mindful of money problems, this budget contains no big expenditures and has the smallest spending increases DeBlasio has ever requested.

The mayor did not identify or detail any of the sidelined initiatives. He said that that information cannot be discussed until the state provides answers for the budget.

The Citizens Budget Commission has said that the city’s budget has increased 15,6 percent in the last two years due to the enormous costs involved in operating Medicaid, the health insurance program for indigent New York City residents.

The mayor warned of possible Medicaid cuts up to $2 billion in New York City alone.

The city’s Health + Hospitals would carry the brunt of the costs under any cuts to the Medicaid program, de Blasio said, according to a report on the Gothamist.com web site.

“I mean you’re talking about a lot of families who need health care who just wouldn’t get it,” de Blasio told reporters at the press conference. “Clearly this would endanger the strength of Health + Hospitals. It would mean less personnel, it would mean longer wait times.”

CBC head Andrew Rein said, “The budget problem in Albany is real. We need a sustainable Medicaid program and this is not it in any way, shape or form.”

Next week, New York State Governor Andrew Cuomo will be addressing the budget crisis as he rolls out his initial proposal, according to the Post report.

Many mayors and county leaders in New York were somewhat taken aback when Cuomo touched upon the budget issue in his recent State of the State address in Albany. During his speech, he argued that local municipalities should shoulder more of the financial burden.

Cuomo said during his speech that New York City’s share would be approximately $2 billion and DeBlasio repeated that figure when he laid out his spending plan on Thursday.

A chief spokeswoman for Cuomo, Dani Lever said, ““We have heard of smoke and mirrors and political straw but how the mayor can claim he is reacting to cuts from the State before the State has even proposed a budget is spreading the political cream cheese too thick even for a toasted bagel.”

On Thursday, DeBlasio said that he has not spoken with Cuomo since the governor’s address in which he spoke about the possible shifts in shouldering the costs.

According to the latest projections, officials initially indicated that the 2020 budget would call for $92.8 billion, but it has increased to $94.6 billion.

The Post report said that DeBlasio attributed much of the new spending in his $95 billion plan to new labor contracts with city unions, new spending on special education in city schools and costs associated with the state-ordered overhaul of the criminal justice system, which expanded discovery requirements and nixed bail for most non-violent offenses.