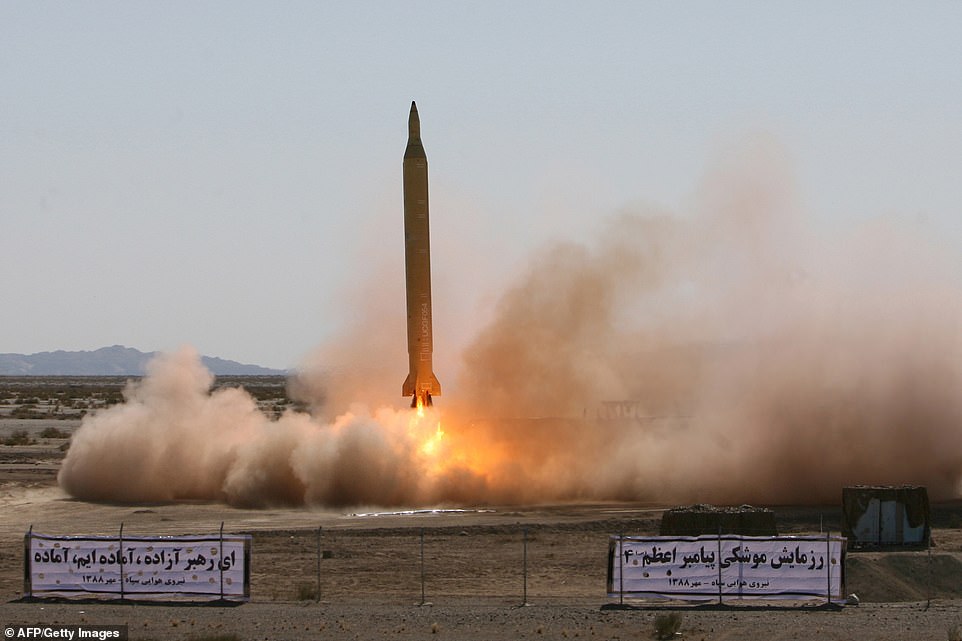 An Iranian long-range Shahab-3 missile is fired in desert terrain at an unspecified location in Iran on September 28, 2009. New documents show the regime was trying to develop nuclear warheads. Photo Credit: Getty Images

The Daily Mail of the UK has reported that a secret Iranian government document that has never been seen before provides proof that the regime in the rogue country was attempting to construct a nuclear weapon for hostile purposes as far back as 2002.

While claiming that the technology they were using in terms of nuclear material was for energy purposes, it appears that the regime has other ideas on how they were going to use their nuclear power.

According to the Mail Online, they are exclusively revealing to the world the document that was seized as part of a raid by Israeli intelligence agents on a compound in Tehran in 2018. The Mail report shows scientists outlining their proposals for a ‘warhead’, which are given the green light by Tehran’s top nuclear official.

The explosive document is at the center of a soon-to-be published report by the Friends of Israel Initiative (FOII), a group of foreign policy experts including several former presidents and prime ministers, according to the Daily Mail.

The Mail reported that the document was discovered amongst many other documents in the Tehran compound and that as part of a fact-finding mission to the country led by Canada’s former foreign minister John Baird, they were given exclusive access to it.

Baird, the chief author of the report said Iran was the ‘biggest terrorist organization in the world’.  Baird steered Canada’s foreign policy from 2011 to 2015.

He also said that, in light of Donald Trump’s isolationism and clarity over Brexit, Boris Johnson is best-placed to be the next ‘leader of the free world’ and spearhead the Western push-back against Iran, as was reported by the Daily Mail.

The document, dated November 28, 2002, is from a senior Iranian official requesting the parameters of a warhead fitted on a missile, according to the Daily Mail report.  Scribbled in the top left corner is a note from Moshen Fakhrizadeh, Iran’s nuclear science chief, who writes: ‘In the name of God. Right now in a treatment process. Please archive the original script of the document. Fakhrizadeh’

In January of 2018, Israel successfully obtained thousands of files from metal safes which Israeli Prime Minister Benjamin Netanyahu said was sufficient proof that Iran had deceived former President Obama on the extent of its nuclear program.

The FOII report claims this proves the ‘military dimension’ of Iran’s nuclear project, despite the regime claiming its program did not go beyond ‘feasibility’ studies.

The Mail reported that after being ‘briefed extensively by Israeli security officials’ on the contents of the Iranian archives, the authors of the FOII report write that ‘Iran intended to become a fully operational nuclear state’.

They claim that these documents undermine the basis of the 2015 nuclear deal brokered between Iran and the US, UK, France, Germany, Russia and China.