Why the Left blames the attacks on White Supremacy

The terminated teachers protested, saying that they had seniority and that their dismissal was based on their racial identity, rather than their competence or qualifications. An African American judge determined that there were no credible accusations against these teachers, but activist Rhody McCoy stated, “Not one of these teachers will be allowed to teach anywhere in the city. The black community will see to that.” Activist Sonny Carson said, “I don’t think that any white person is interested in giving a black child an education … By any means necessary [whites] are going to be kept out.” Pamphlets appeared alleging that Jews are “Blood-sucking Exploiters and Murderers … the So-Called Liberal Jewish Friend … is Really Our Enemy and He is Responsible For the Serious Educational Retardation of Our Black Children.” “The Black Community Must Unite Itself Around The Need To Run Our Own Schools And To Control Our Own Neighborhoods Without Whitey Being Anywhere On The Scene,” the pamphlet said.

Inflammatory rhetoric was sometimes accompanied by violence. Leslie Campbell was a teacher who, like many involved in this strike, would go on to jettison his “slave name” and take an African-inspired name, in his case Jitu Weusi. In another case, a student named “Cheryl” became “Monifa”. Campbell / Weusi exhorted his students, “You have to stop fighting among yourselves … You’ve got to get your minds together. If you steal, steal from those who have it. … When the enemy taps you on the shoulder, send him to the cemetery. You know who your enemy is.” Afterward, three teachers were injured “including one white woman who was punched, had her hair torn, and her clothes ripped.” 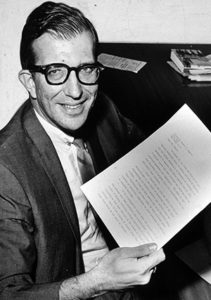 Albert Shanker didn’t speak English when he entered school. He encountered antisemitism. But he excelled. Shanker learned “the value of public education to civic identity.” The phrase “civic identity” is key. Part of public schools job is “e pluribus unum”: out of many, one. Shanker entered school a despised Jew who could not speak English. He emerged as an American leader of national importance.

The Rev. C. Herbert Oliver was chairman of the new community-control governing board. He signed the letters dismissing the Jewish teachers. When he was confronted on how his terminations would hurt the teachers and also hurt black-Jewish relations, Rev. Oliver said, “We have had three hundred years of scars and it’s about time those scars were healing.” In other words, Rev. Oliver argued that black suffering trumped any suffering the teachers might experience from being abruptly dismissed from their jobs, and that progress is a zero sum game. For blacks to advance, others must go back.

Separatists promoted their idea of an appropriate education for black students. Students were told that they descend from the Yoruba tribe, and from “African kings and queens.” They were trained to perform African drumming and dances. One student remembers feeling humiliated and terrorized by her “white” schoolwork. Students were taught that “racism is inherent in the educational system” a system rife with “white privilege and white ignorance.” This “white” schoolwork, for example, taught that Isaac Newton made advances in the sciences and mathematics. They were taught that Newton’s work was not new, and Africans were the first to come up with innovations attributed to Newton. Students in the new curriculum read Malcolm X, Marcus Garvey, H. Rap Brown, and Mao Tse Tung. “We became international,” one former student remembers. “It’s a good thing because black people are the Third World.” “We’re going to do Kwanza and not Christmas,” another student remembered.” We will, she said, “get rid of white Jesus.” Students sang the Black National Anthem.

This curriculum suggests at least one potential irritant between blacks and Jews in the Ocean Hill-Brownsville strike. When Ashkenazi Jews first arrived in the US in large numbers in the late nineteenth century, they were a visible, vulnerable, hated and vilified minority. Many Jewish immigrants to America responded to their ghetto identity by shaving their beards, adopting American dress, and naming their children “Sylvia” and “Sheldon,” non-Jewish names selected by Jewish immigrants exactly because the names were not Jewish. These Americanized Jews became teachers, and no doubt many believed that they were handing black children the keys they themselves had used to enter Die Goldene Medina, the Golden Land.

Jews were not just teaching these keys to success in America. Jews embodied these keys. A mere 23 years before the strike, Auschwitz and Dachau were still functioning. American Ivy League universities still had anti-Jewish quotas, and social, housing, travel, occupation, and employment opportunities were restricted for American Jews. And yet Jews overcame. Public education played no small part in their rise.

Albert Shanker epitomized this saga. Shanker’s mother, Mamie, was from a family impoverished by antisemitic laws and corruption in Russia. Mamie herself had to hide in a Christian neighbor’s barrel under potatoes to survive a pogrom. Her half-sister was raped by soldiers and subsequently died. Shanker’s father, “Morris rose at 2 A.M. seven days a week, pushed a cart stacked with bundles of the city’s half dozen morning newspapers through a five-mile area of Queens, then returned at 10 A.M. to deliver the afternoon newspapers.” Shanker hardly ever saw his father. His mother worked long hours in a sweatshop. “So grueling was her work that Mr. Shanker once visited her factory and could not recognize her as she sat bent in sweaty concentration at her [sewing] machine.” Even so, Mamie bought and discussed novels and poetry and attended the opera when she could afford the “standing room only” section. Shanker didn’t speak English when he entered school. He encountered antisemitism. But he excelled. Shanker learned “the value of public education to civic identity.” The phrase “civic identity” is key. Part of public schools job is “e pluribus unum”: out of many, one. Shanker entered school a despised Jew who could not speak English. He emerged as an American leader of national importance. 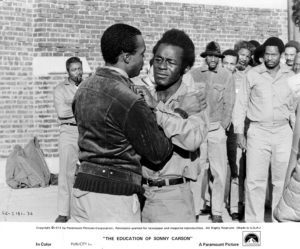 Rony Clanton grabs man by shoulders in a scene from the film ‘The Education Of Sonny Carson’, 1974. (Photo by Paramount Pictures/Getty Images)

Jewish teachers wanted to hand these keys over to black students. Their very presence announced, “America is a Golden Land. We did it. You can, too. Yes, you will face prejudice, but don’t respond with violence or despair; respond with hard work, family support, and determination.” That route was rejected by black nationalists. During the Ocean Hill-Brownsville strike, the Jews who traveled and embodied that route were rejected, as well.

Can white teachers educate non-white students? If black students do poorly in schools, is that because of their white teachers’ racism? Do black students require “Afrocentric” curricula to succeed? Do efforts to raise student self-esteem improve student academic performance? Should liberals support unions and their concept of seniority, or identity politics and the black-teachers-for-black-students model? If white teachers can’t teach black students, can black teachers teach white students? Are there such things as educational standards, authority, and competence, or do standards vary depending on the skin color of the student? Is it more important for a black student to learn African drumming or reading, writing, and arithmetic, that is, subjects that have constituted a basic curriculum for millennia? Is education “white” and “racist”? Does one group – for example, newly hired black teachers – rise only at the expense of another group – that is, the Jewish teachers whose employment was terminated? Can we ever overcome tribalism? Do we want to? Does progress have to be a zero sum game?

A remarkable document emerged from the Ocean Hill-Brownsville teachers’ strike. On December 26, 1968, Campbell / Weusi appeared on WBAI, a left-wing radio station. Campbell read a poem that he said was written by one of his students in response to Jewish teachers. There are various versions of the poem on the web. One version is below.

Hey Jew boy, with that yarmulke on your head

You pale faced Jew boy. I wish you were dead.

I can see you Jew boy. No you can’t hide.

I got a scoop on you. Yeh, you gonna die.

I’m sick of your stuff …

about the murder of six million Jews

For that period of time you shed crocodile tears

My suffering lasted for over 400 years, Jew boy …

Jew boy, you took my religion and adopted it for you

But you know that black people were the original Hebrews. 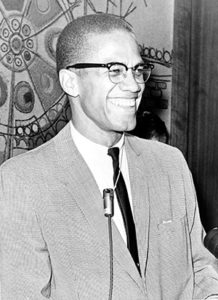 Students in the new curriculum read Malcolm X, Marcus Garvey, H. Rap Brown, and Mao Tse Tung. “We became international,” one former student remembers. “It’s a good thing because black people are the Third World.” “We’re going to do Kwanza and not Christmas,” another student remembered.” We will, she said, “get rid of white Jesus.” Students sang the Black National Anthem. Photo Credit: Wikipedia

On January 29, 2019, the Brooklyn Historical Society hosted a fiftieth-anniversary commemoration of the Ocean Hill-Brownsville strike. An audience member who identified as a former teacher and member of the African Teachers’ Association recommended the poem. Audience members applauded. They were probably ignorant of the poem’s contents. But no one on the invited panel of experts objected, and either they knew the contents of the poem and let the mention slide, or they were not, as identified, experts.

Again, there are consistent cultural threads connecting events as dispersed as a teachers’ strike over fifty years ago, a high school field trip twenty-six years ago, and recent violent attacks. Both the Rev. C. Herbert Oliver and Castlemont high students cited black suffering as justification for indifference to Jewish suffering. One version of Jitu Weusi’s student’s poem identifies Jews as imposters who have stolen black people’s real identity from them. That very libel fueled both the 2019 Jersey City killers and the Monsey stabber.

The concept of Jews as thieves of black identity is the new blood libel. It is a metaphor. Those who embrace it are saying, “Jews, you are paler than I am and you have suffered. You are stealing my narrative that identifies all blacks as victims and all whites as privileged. Your suffering teaches people that blacks are not the only people who have suffered. Suffering offers some rewards, and I will not share those rewards with you. Suffering is a competition, a kind of Olympic event. You have the Nazi era? I will claim hundreds of years of slavery and trump you. If you mention millennia of antisemitism, and that Jews were slaves in Egypt, I will deny your story and insist that you stole it from me. I will claim that the Bible’s characters were really black.”

Responses, too, echo down the years. Should we ignore black antisemitism, on the grounds that black people have suffered enough, and are stereotyped enough, and any attention brought to black antisemitism only increases black people’s considerable burdens? If we draw attention to antisemitic motivations for violent behavior, do we risk increasing that behavior and damaging important alliances? We asked these questions fifty years ago, and we ask them today.

Only a minority of black people are anti-Semites, but those that are, are not lone wolves. They are not inventing the wheel. Rather, they are steeped in a significant cultural trend, a trend that persons of conscience will name, confront, analyze, and denounce.

Danusha Goska is the author of God through Binoculars: A Hitchhiker at a Monastery