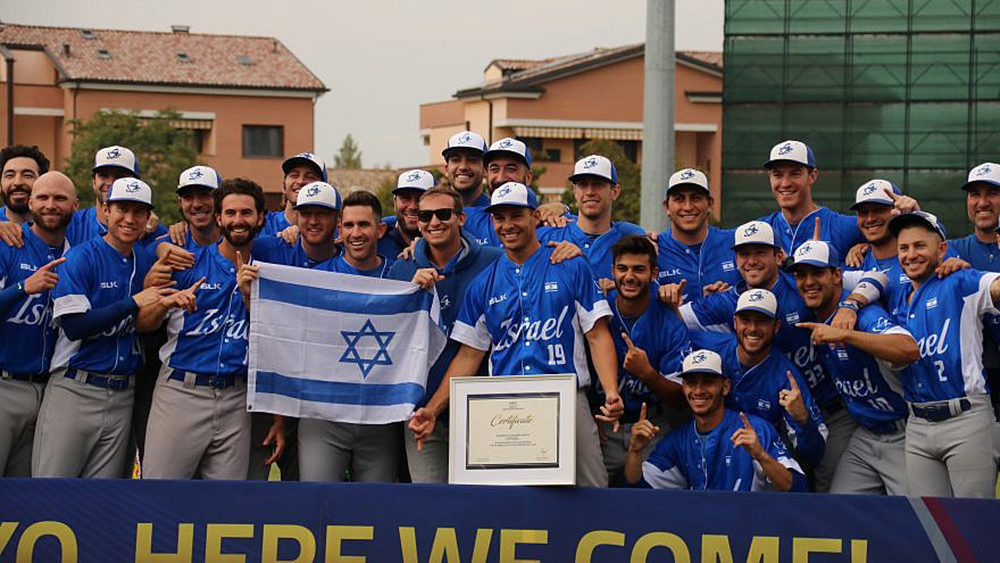 Baseball Team Israel celebrates after qualifying for the 2020 Olympics in Tokyo. Photo by Margo Sugarman.

“We are about to build a field and complex in Beit Shemesh, which will become Israel’s national baseball stadium. My focus is to bring awareness that we are building baseball here,” said Jordan Alter, the new president of the Israel Association of Baseball.

Israel might be known globally as a high-tech juggernaut, but the “Startup Nation” is on the verge of being a superpower in diamonds as well. No, not the kinds that shine, but the kinds you use for pitching, catching and batting—as for the first time in history, the Israel men’s national baseball team has qualified for the Summer Olympic Games to be held this summer in Tokyo.

This past September, Israel stunned the competition by winning the “A” pool Olympic-qualifying tournament in Italy, where the best teams in the Europe/Africa regions were competing with a chance to move on to Japan.

Jordan Alter, the new president of the Israel Association of Baseball (IAB)—the organization that oversees all official baseball activity in Israel—tells JNS that reaching the Olympics was nothing short of astonishing. “It was a wild dream just to get to Group ‘A,’ ” he says. “To get to where we are, to the Olympics, is a dream come true. Europe is in shock” that we won the tournament, he adds.

Alter explained that out of the 24 members of team Israel, four are native Israelis. The other 20 are Americans who became Israeli citizens for the purpose of being eligible for the games, as players must have citizenship in the country they are representing.

The players must also not be currently on the roster of a Major League Baseball team in the United States/Canada, the top league in the world. Some of the players do have experience in the Majors, while many are currently playing in the Minor Leagues.

Bostonian Jeremy Bleich, 32, is a left-handed pitcher on the team. He is currently an MLB free agent who has played for various teams in the league after being drafted in the first round by the New York Yankees in 2008. He tells JNS that playing for the Oakland A’s in 2018 was “the highlight of my career.”

He got involved with Israel baseball in 2017, when the team competed in the World Baseball Classic in South Korea/Japan exceeding expectations with a sixth-place finish.

Bleich says that he welcomed the opportunity to represent Israel on the mound internationally. “Being a Jewish American, I grew up in a Conservative Jewish environment and was always in touch with my Judaism.” He shares that it has extra meaning for him to play for Israel, as he is the grandson of two Holocaust survivors. “When the IAB gave me the opportunity, I jumped at it quickly,” he says.

In terms of his expectations for the team in the upcoming Olympics, Bleich says “we just want to continue to complete and do some damage in the tournament.”

But more importantly, he notes, “the more successful we are, the more attention we can bring the State of Israel [in baseball], and can help provide confidence, desire and hope for young Israeli kids to step out of their comfort zone and want to play baseball.”

He stresses that “it’s an honor to represent the State of Israel and the worldwide Jewish community on such a large scale.” He also says now that he has citizenship, he would consider living in Israel full-time one day.

‘Try to get more kids involved’

The team’s manager and coach is Eric Holtz, 54, who lives in White Plains, N.Y. He has coached college baseball in the United States for the past 20 years, and also owns and operates a strength- and conditioning-training facility for athletes who play baseball and softball.

He served as a player/coach in the short-lived Israel baseball League in 2007 for the Beit Shemesh Blue Sox. In 2017, after guiding Team USA to a Gold Medal in the Maccabiah Games in Israel, he was quickly scouted and asked to coach Israel Team Israel, which he accepted.

When asked by JNS if Team Israel has a shot to stand on the medal’s podium this summer, he doesn’t have a definitive answer.

“Look, nobody gave us a shot anywhere we went,” says Holtz as he lists Israel’s impressive tournament results on the long road to Tokyo. “This is how I live my life and coach baseball and father my kids: one day at a time. And the fact that no one gave us a shot makes this even sweeter for us.”

He concludes by saying, “I worry about us [Team Israel], handling our business. If we handle our business, then we are going to be just fine.”

Similar to comments made by Bleich, Holtz says that at the end of the day, “we are trying to build awareness, and love and passion [for baseball], and bring that to Israel. After wins and losses, our job is to try to get kids more involved.”

While Alter is certainly excited about the Olympic bid, he seems equally proud of the fact that 800 youth currently play in organized baseball leagues and clinics throughout Israel. He hopes to double that number as a result of upcoming plans to construct a professional-level baseball stadium in Beit Shemesh.

“What’s personally important to me is Israel baseball,” he says. “We are about to build a field and complex in Beit Shemesh, thanks to the help of our partners JNF-USA, which will become Israel’s national baseball stadium. My focus is to bring awareness that we are building baseball here. The Olympics is a big opportunity to get the word out.”

Holtz says he team will begin training for the Olympics shortly at a facility in New York. In large part due to the 24-member baseball squad, Israel will be sending its largest-ever delegation to the Olympics with around 85 athletes competing in 18 different sporting events.

The opening ceremony for the 2020 Tokyo Games is set for July 24, with the baseball competition slated to begin July 29, and the Gold Medal Game scheduled for Aug. 9.

Holtz says “for us, nothing could be greater than having the Israeli people behind us.”

And while baseball has yet to overtake soccer or basketball as the most popular sport in the Jewish state, there’s no doubt that Israelis will behind all its Olympians, baseball hopefuls included.