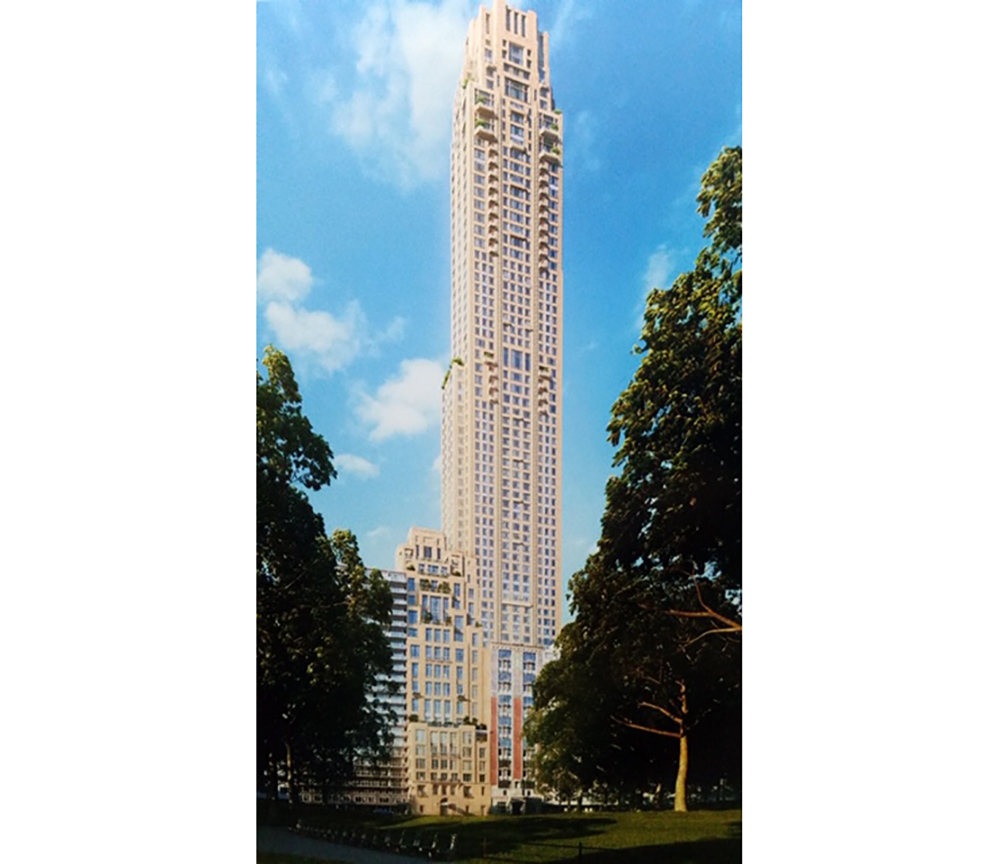 Penthouse 73, which the New York Times described as a sprawling duplex sold for $92.7 million. It was the most expensive closing for the month of December, as well as the year’s second-biggest sale over all, according to the NYT report Photo Credit: New York YIMBY

For those who watch the New York City real estate market, the final month of 2019 saw a huge sale at 220 Central Park South.

Penthouse 73, which the New York Times described as a sprawling duplex sold for $92.7 million. It was the most expensive closing for the month of December, as well as the year’s second-biggest sale over all, according to the NYT report. The person who plunked down this kind of money for his new diggs was not unexpectedly a hedge fund manager. The Times reported that his name is Daniel Och and in addition he purchased a studio apartment on the 19th floor for an additional $2.1 million.

Penthouse 73 sits on 220 Central Park South’s 73rd and 74th floors. The 9,817-square-foot apartment has four bedrooms, five full baths and two half baths, along with a 796-square-foot terrace, according to the latest amended offering plan by the developer, Vornado Realty.

In May of 2019, the Jewish Voice reported that Citadel founder Ken Griffin had paid $238 million for the penthouse at 220 Central Park South – an all-time record for a home. The Times reported that Griffin also acquired two adjacent studios on a lower floor in October.

Only weeks before he purchased the apartment at 220 CPW, it was reported that Griffin spent $122 million on a 200-year-old home overlooking London’s St James’s Park about half a mile from Buckingham Palace.

The purchase of Penthouse 73 at 220 CPW is the third priciest residence ever sold in the city, according to the Times article. A duplex at the pinnacle of One57, on West 57th Street, was bought in 2015 for nearly $100.5 million, reportedly by Michael Dell, the chief executive of Dell Technologies, according to the Times report.

“He (Griffin) is definitely a global trophy hunter and he bought what would arguably be now the number one building in New York,” Donna Olshan, president of Olshan Realty, told stockvisionary.com in an interview. “I don’t think that the fact that he buys an extraordinary trophy property speaks anything about the market. It’s just this is what he does and you have to look at it as a one-off. Hats off to the developer for that kind of sale.”

During an interview with Bloomberg TV, Griffin criticized the Left’s desire to try and solve problems by taxing the rich. “It’s always appealing as a populist card, let’s soak the rich. That’s an easy throwaway solution to problems, except it doesn’t work. I live in Cook County. One of the richest counties in the country in terms of cultural institutions or great universities, the University of Chicago and in nearby Evanston, Northwestern. And yet we’ve lost more college-educated students, sorry, graduates, than any county in the country over the last several years as people flee the corruption, cronyism and crime that has become part of the Illinois political landscape.”

In a reference to his newest penthouse property in New York, Griffin talked about the prospect of leaving his native Illinois. “How do you not? I have three little kids. They go to one of the best schools of Chicago. But there have been repeated incidences of actual, like, gang battles with guns three blocks from where they go to school.”

Despite that, he added, he does not wish to move his family or his company. “I have three children and we were talking about tax policies. My 8-year-old is delightfully precocious and she says, “Dad, why won’t we just move?” And I said, “Because we are going to stand and fight. We’re going to stand and fight for the policies and changes that will make this state better.”

Griffin is also quotes in ai-cio.com as being dissatisfied with the country’s education system, “which he charged the government has ruined, saddling students with huge debt and pumping up the cost of education at the same time.”