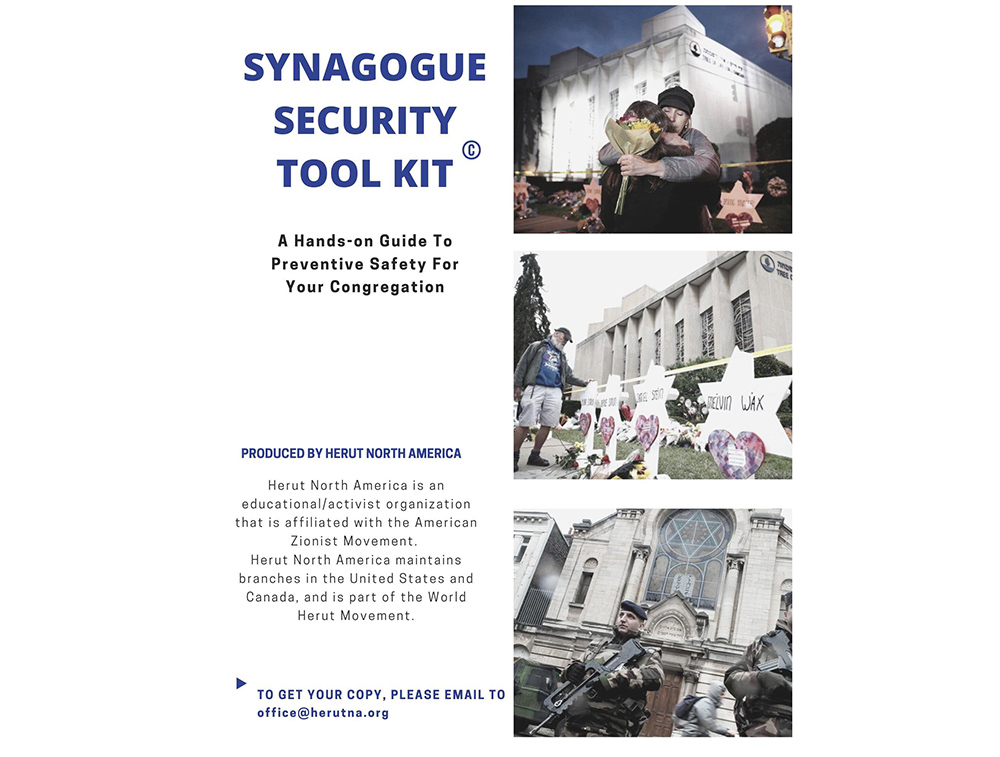 Herut North America, a leading Zionist activist organization, is offering a new, cutting-edge guide to help congregations better organize their security efforts to protect synagogue attendees. The "SYNAGOGUE SECURITY TOOL KIT©" is being offered free of charge to all members of the Jewish community interested in improving security as well as synagogue leaders.

In the wake of repeated violent physical attacks on synagogues and Jews in New York and elsewhere, Herut North America, a leading Zionist activist organization, is offering a new, cutting-edge guide to help congregations better organize their security efforts to protect synagogue attendees. The “SYNAGOGUE SECURITY TOOL KIT©” is being offered free of charge to all members of the Jewish community interested in improving security as well as synagogue leaders.

We have developed this ebook guide as a hands-on tool to aid synagogues with both evaluating their security needs as well as organizing their own security teams. This information packed booklet is specifically designed to give Jews the information they need to feel empowered around security related needs and issues. Included are checklists, assessment worksheets, planning guides, practical advice, and more.

The Herut team responsible for this booklet includes IDF veterans, individuals trained in counter-terrorism, longtime community security volunteers, and legal professionals. Users of the guidebook will find practical, actionable ideas whether their synagogue has a security plan currently in place or is now considering forming a volunteer security team and needs an action plan.

In light of the recent spate of attacks against Jews across multiple states we are offering the “SYNAGOGUE SECURITY TOOL KIT©; A Hands-on Guide to Preventive Safety for Your Congregation” ebook. This free reference to protecting your community will help you develop a security plan that you can implement in your synagogue, kollel, yeshiva, camp, or day school. Our goal is to have this booklet utilized by synagogues in all 50 states so that further anti-Jewish violence and bloodshed can be prevented. Please, help us reach our goal of preparing synagogues all across America to be more secure by ensuring the leaders of your synagogue see this booklet as soon as possible.

The “SYNAGOGUE SECURITY TOOL KIT©” also specifically addresses the fact that Orthodox Jews have been heavily and specifically targeted in recent attacks by including a section titled “Self-Defense Tips While Walking To / From Synagogue” in the booklet.

Action is required now. Please help us reach our goal in making the streets safer for Jews across America. Download and use this free resource yourself and also please share on social media the news that this ebook is now available so Jews everywhere will have access to this potentially life-saving material.”

The founding fathers of Zionism had a few relevant thoughts on the subject of combating violent Jew-hatred.

In other words, no matter what we do, anti-Semitism in the Diaspora is inevitable. We can issue angry press releases, we can lobby the government to “throw the book” at anti-Semitic assailants, but in the end, there are overwhelming social, economic, and other factors that inevitably combine to bring about situations in which anti-Semitism erupts.

Again and again. Throughout history. In every country. Under pharaohs. Under czars. Under fuhrers. And sometimes even under presidents or prime ministers of democracies.

Jabotinsky was an outspoken advocate of Jewish self-defense, both in the Diaspora and in the Land of Israel. He was one of the organizers of Jewish self-defense against pogroms in Czarist Russia and he founded the Haganah in Eretz Yisrael. Because when Jews are physically threatened, they must protect their lives and property.

Certainly Jabotinsky would be all in favor of Jews in Monsey, Jersey City, and in every Jewish community taking classes in self-defense and conducting weapons training. One of his most famous sayings was “Jewish youth, learn to shoot!” But he was even more famous for another of his sayings: “Liquidate the Exile before it liquidates you.”

Yet despite this sad reality, most American Zionist leaders refuse to discuss the traditional Zionist response to anti-Semitism: Aliyah. In fact, few of them can even bring themselves to utter the “a-word.”

So as Zionist leaders we say, if you are not ready for aliyah at this time, then the only answer to such lone wolf attackers as the Pittsburgh, Poway and Monsey attackers is a dual program of stronger security and stronger Jewish Unity. Herut North America – The Jabotinsky Movement, urges all Jews to remain vigilant and keep security top of mind and please use the SYNAGOGUE SECURITY TOOL KIT© to start the conversation about security in your congregation, as soon as possible.

Joshua Goldstein is the chairman of Herut North America and a board member of the American Zionist Movement on behalf of Herut. Joshua was a delegate at the 36th and 37th World Zionist Congress. Moshe Phillips is national director of Herut North America’s US section. Both authors are candidates on the Herut slate in the 2020 World Zionist Congress’s US elections. Herut is an international movement for Zionist pride and education and is dedicated to the ideals of pre-World War Two Zionist leader Ze’ev Jabotinsky. Herut’s website is https://herutna.org/