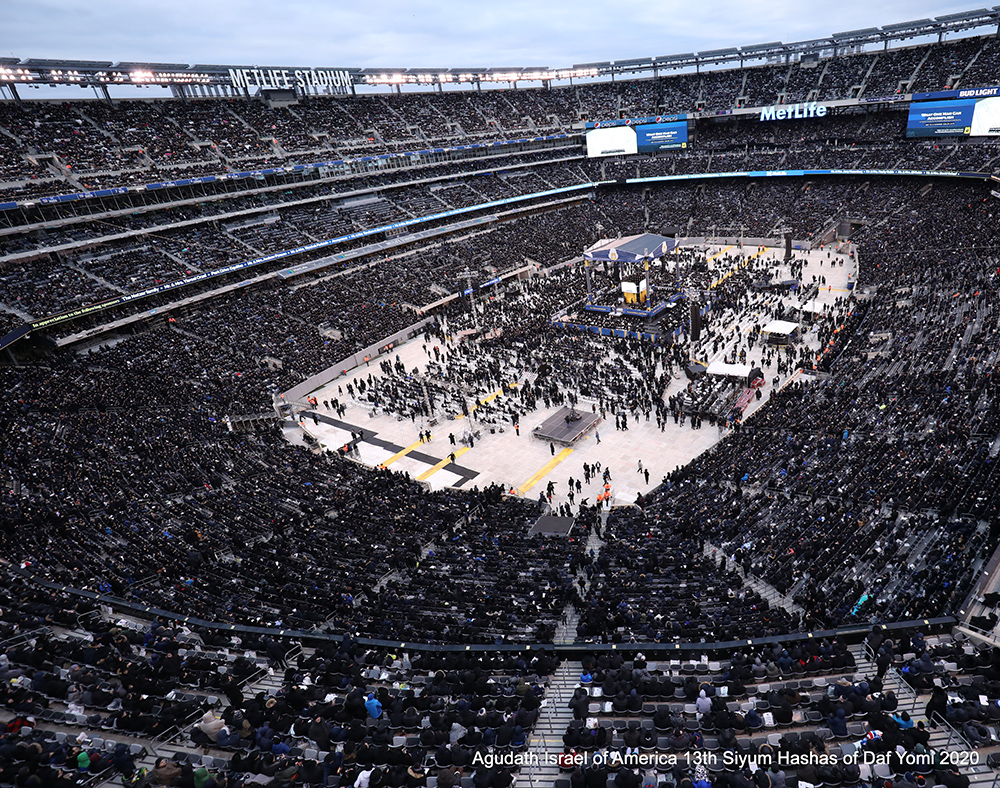 Crowd View of the 13th Siyum Hashas of Daf Yomi. Credit for all photos: Moshe Gershbaum and Chaim Schwartz/Agudath Israel of America Archives

Close to 100,000 members of the Jewish faith gathered on Wednesday afternoon at MetLife Stadium in East Rutherford, New Jersey for the 13th Global Siyum HaShas which is sponsored by the Agudath Israel organization. 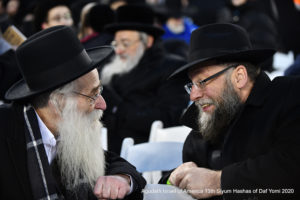 Siyum HaShas is the celebration of the completion of the Daf Yomi (daily Talmud folio) program, a seven-and-a-half-year cycle of learning the Oral Torah and its commentaries, in which each of the 2,711 pages of the Babylonian Talmud are covered in sequence.

Similar events have recently been held in major cities around the globe, such as Mexico City, while others are scheduled in the next few weeks, according to a CBS News report.

With such a large gathering of Jews on the heels of numerous anti-Semitic attacks — including a Saturday night attack at a Chanukah party in Monsey, New York, and the recent Jersey City shootings — security was tight: Parking lots were jammed with traffic, and security lines stretched for miles. Everyone was required to pass through metal detectors, with a K-9 unit on hand to sniff vehicles as well as bags.

“The only way to address the increasing number of anti-Semitic attacks is exactly was learning Daf Yomi is all about,” said Chaim Pomerantz, of Pikesville, Maryland. “Hashem wants us to draw near to Him every moment of each and every day. The only way to ensure our Divine protection is to learn Hashem’s Torah with enthusiasm, with alacrity and with great love.” 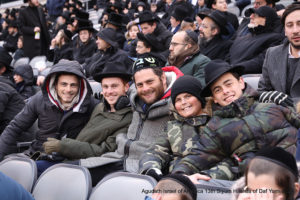 This group of lamden are thrilled to be attending the 13th Siyum HaShas of Daf Yomi at MetLife Stadium in East Brunswick, New Jersey

In addition to the crowd that gathered at MetLife Stadium, 20,000 people convened at Barclays Center in downtown Brooklyn where they were presented with livestream coverage of the Siyum HaShas. Organizers of the Siyum HaShas said that there were smaller celebrations in 80 cities in 15 countries.

The pre-Siyum events included a Yikra D’Oraisa Yarchei Kallah which was held at the Hilton Parsippany Hotel in New Jersey from December 30 – January 1 as well as a pre-siyum inspirational program at the same hotel that was held from December 31 – January 2. 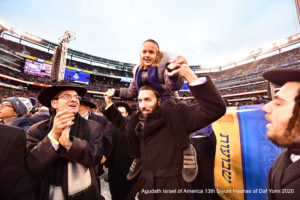 Borough Park Assemblyman Simcha Eichenstein, dancing during the Siyum HaShas celebration with his son on his shoulders.

Daf Yomi can be studied alone, with a chavrusa (study partner), in a daily shiur (class) led by a rabbi or teacher, via a telephone shiur, CD-ROM, or audio and online resources. Typically, Daf Yomi shiurim are held in synagogues, yeshivas, and offices. They also take place in Wall Street board rooms, and on the Long Island Railroad, in the last car of two commuter trains departing Far Rockaway at 7:51 am and 8:15 am, respectively, for Manhattan.

Daf Yomi shiurim have been piped into the in-flight sound system of El Al flights. A typical Daf Yomi shiur lasts one hour. Participants study the text together with the commentary of Rashi.

The Schottenstein Edition of the Babylonian Talmud, an English-language translation and interpretation published in 73 volumes between 1990 and 2004 by ArtScroll, has been credited with significantly increasing the number of English-language participants in the Daf Yomi program.

The Schottenstein Talmud has also been translated into Hebrew. Additional resources to assist those endeavoring to complete the cycle for the first time are audiotapes, online websites, and iPods preloaded with lectures covering every page of the Talmud. The Daf Yomi Advancement Forum, founded by Kollel Iyun Hadaf in 1996, is a free resource center offering English-language translations, outlines, charts, analyses and lectures on every daf, as well as answers to any question by email. Meoros HaDaf HaYomi, founded in 1999, disseminates a weekly Daf Yomi study sheet in both Hebrew and English available by email and regular mail. It has recorded shiurim on the daf on CD-ROM in English, Hebrew, Yiddish, and French. 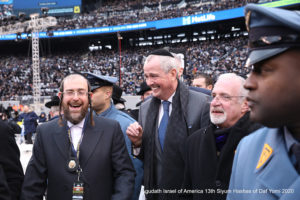 The first Daf Yomi cycle began on the first day of Rosh Hashanah 5684 (September 11, 1923); the twelfth cycle concluded on August 2, 2012 and the next day began the thirteenth cycle, to be concluded on January 4, 2020. The Siyum HaShas marks both the end of the previous cycle and the beginning of the next and is characterized by inspiring speeches and rousing singing and dancing.

According to a report on the Jewish Insider web site, Yossi Gleiberman, a lecturer and the composer of the “Songs of Shas” musical video series said, “In the 1930s, it was Rabbi Meir Shapiro’s idea to start a program where people would be studying the same page on a daily basis — approximately between 40 minutes and an hour a day — throughout the whole world — so that if a person in New York travels to London or somebody from London travels to Japan, he’d meet the fellow participant of the Daf Yomi cycle and they can study together and share their thoughts. And today… we are able to share with people from around the world or other study groups daily lectures and commentaries via social media.”

In November of 2019, Shlomo Gertzulin, Executive VP of The Siyum exhorted those interested in attending the Siyum HaShas to order their tickets as soon as possible. 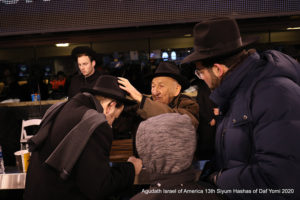 “Once the Siyum seats are gone, they are gone,” said Rabbi Gertzulin. “There are only limited seats available, and many sections are already completely reserved. Once the remaining seats sell out, it will just be too late. Please, don’t wait any longer to get your seats, so you will not be disappointed.”

“There is nothing more rewarding than hearing the excitement Klal Yisroel has in coming to be inspired at The Siyum. Tens of thousands were motivated to start learning Daf Yomi last time, and they have been waiting more than seven years to come celebrate with their children and families,” said the long time Agudath Israel executive and son-in-law of the late Rebbetzin Esther Jungreis, of blessed memory. “Of all the siyumim I have been a part of, this is by far the most exciting,” Rabbi Gertzulin added.

Stories abound about the commitment Jews have shown to Talmud study in general and the Daf Yomi study program in particular.

Jay Schechter is one example.

It was at the Eleventh Siyum Hashas of Daf Yomi in 2005, when Jay Schechter, then principal and CEO of Rambam Yeshiva in Brooklyn, was in Madison Square Garden with his students. That event – especially the dancing – made a powerful impression. The very next day, Mr. Schechter established a successful Daf Yomi study group, including several students in the Rambam-affiliated Zvi Dov Roth Academy. “The Daf” became an integral part of Jay’s DNA.

Over the subsequent years, Jay suffered four heart attacks and underwent four surgeries and hospitalizations. Despite the pain and physical weaknesses involved during the procedures and recovery, Jay consistently learned The Daf. Doctors and nurses watched in awe as their patient clutched his volume of Talmud while connected to an array of monitors and machines, toiling over each holy word. 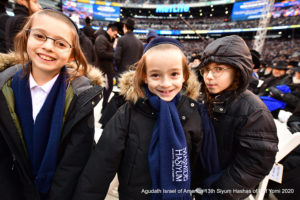 “The Daf is a commitment you make every day,” says Jay, “to learn it no matter where you are and what the circumstances are.”

At the last Siyum Hashas in 2012, Jay shared his story with a reporter. When it was shared around the world on television, Jay earned a nickname: His friends call him the “Daf Guy,” while he – of course – continues to diligently learn The Daf.

Mendy Rosenberg of Flatbush, Brooklyn, is another Daf Yomi stalwart. Mendy is currently in an advanced stage of ALS, one of the most difficult degenerative diseases known to man, and yet he studied Daf Yomi, day after day, for the past seven-and-a-half years. During most of this time, his only method of communication, the only voluntary movement he still controls, was the ability to blink his eye. Mendy, who was diagnosed in 2009, attended the last Siyum HaShas. He was so moved by what he saw that when the new cycle started, he took upon himself that by the next Siyum–this one–he would be part of the action as one who himself completed the Talmud.

And indeed, he did.