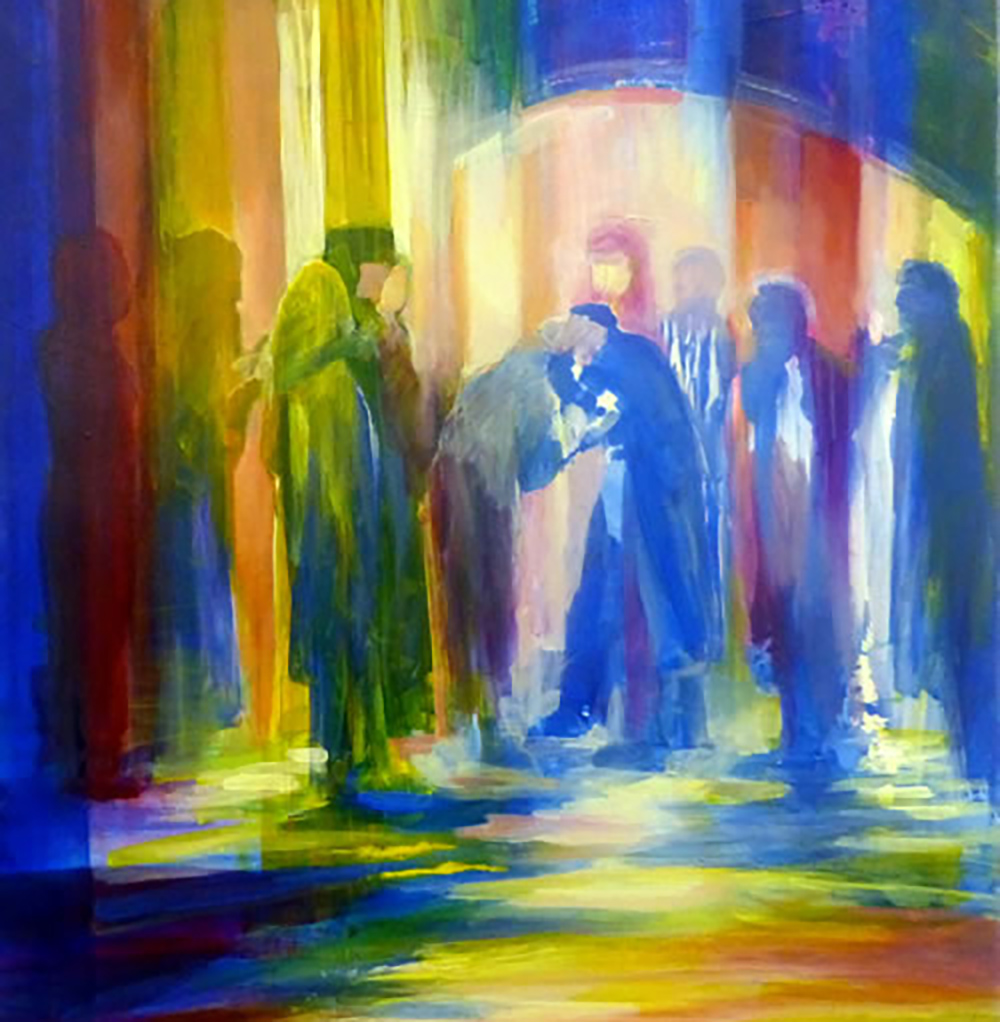 Yosef HaTzaddik meets his father Yaakov after being apart for 22 years.

The Midrash Rabbah comments on the verse (45:28), “Yisrael said, ‘How great! My son Yosef still lives!’”– Yaakov said, “How great is the strength of my son Yosef! How many troubles caught-up with him, yet he remained righteous, unlike me [Yaakov] who sinned by saying (in the words of Yeshayah 40:27), ‘My way is hidden from G-d’ [i.e., G-d has hidden Himself and is not watching over me directly]. I am certain I will share in the reward about which it says (Tehilim 31:20), ‘How abundant is Your goodness that You have hidden away for those who fear You!’”

How did Yaakov know that Yosef had remained strong in his faith during all of his years in Egypt?

Commentaries ask: Why didn’t Yosef write to his father during the 22 years that Yosef was in Egypt to let Yaakov know that he was alive? The answer is that Yosef did not write because he understood that what was happening to him was part of a bigger plan. He may not have understood the exact meaning of events, but he recognized that he would be interfering with history by contacting Yaakov. Yaakov now understood Yosef’s thinking and recognized that Yosef’s decision required tremendous faith and a strong belief that Hashem is directing history. According to the Midrash, Yaakov’s own faith had not remained as strong.

In Olam Ha’ba, continues R’ Yadler, one can receive reward in two ways: (1) for his own meritorious actions and (2) for those of his children and students. The latter is what the verse refers to when it says, “How abundant is Your goodness that You have hidden away for those who fear You!” Unlike the reward for a person’s own deeds, which is finite (because he stops earning reward when he dies), the reward that a person earns for being a positive influence on others is infinite (and therefore “hidden”), for he continues to earn it as long as his positive influence continues to bear fruit. The latter is the reward Yaakov was anticipating. (Tiferet Zion)

The first verse quoted above relates how excited Yaakov about the prospect of being reunited with Yosef after a 22-year separation. Yet, in the Pesach Haggadah we say about Yaakov, “He descended to Egypt–compelled by the Divine word,” implying that Yaakov did not go to Egypt of his own free will!

R’ Ben Zion Nesher shlita (one of the senior rabbis in Tel Aviv, Israel) explains that the Haggadah is relating how perfect Yaakov’s service of Hashem was. Yaakov suffered tremendously during the 22 years when Yosef was missing. Then, Yaakov heard that Yosef was alive, and 22 years of emotions erupted like a volcano. “How great! My son Yosef still lives! I shall go and see him before I die.”

Those were the feelings with which Yaakov began his journey. But, then, Hashem appeared to Yaakov in a vision and effectively commanded him to travel to Egypt. Immediately, Yaakov put aside his personal reasons for descending to Egypt; instead, every step he took from then on was only because he was “compelled by the Divine word.”

R’ Nesher continues: Similarly, Hashem told Avraham (12:1), “Go for yourself from your land, from your relatives, and from your father’s house . . .” Rashi z”l comments: “‘For yourself’–For your own benefit.” Nevertheless, the Torah relates (12:4), “Avram went as Hashem had spoken to him.” He went solely because it was a Mitzvah, not for any benefit that he might receive. (Haggadah Shel Pesach Shir Tziyon p.65)

“Yosef harnessed his chariot and went up to meet Yisrael, his father, in Goshen. He appeared before him, fell on his neck, and he wept on his neck excessively.” (46:29)

Rashi z”l writes: Yaakov did not fall upon Yosef’s neck, nor did he kiss him. Our Sages say that the reason was that he (Yaakov) was reciting the Shema.

R’ Yerucham Halevi Levovitz z”l (Mashgiach Ruchani in the Mir Yeshiva in Poland; died 1936) observes: One must be amazed at Yaakov’s concentration! At this moment, he was being reunited with his long-lost son, who was now crying on his shoulder, and Yaakov was still able to focus on the words of Kri’at Shema!

R’ Levovitz continues: Commentaries ask why Yosef was not reciting Kri’at Shema at this moment as well, and they give various answers. The underlying assumption of their question is that, had Yosef wanted to say Kri’at Shema now, he, too, could have put all other thoughts out of his mind and concentrated on his prayers. (Da’at Torah)

R’ Shlomo Pappenheim z”l (1740-1814; Dayan / rabbinical court judge in Breslau, Germany) asks: Would it not have been sufficient for Pharaoh to ask, “How many are the years of your life?” What is meant by “the days of the years”?

R’ Pappenheim answers: The Hebrew word “Yom” [like its English counterpart “day”] can refer, on the one hand, to a 24-hour period of light and dark and, on the other hand, to only the daylight portion of a 24-hour period. The reason we use the same word for both periods is that it is the daylight hours, when man engages in activity and accomplishes, that make a 24-hour period meaningful. This is why, writes R’ Pappenheim, the Prophets refer to history books as “Divrei Ha’yamim” (see, for example, Esther 2:23). In contrast, night is a time of inactivity and passivity.

[Ed. Note: According to R’ Pappenheim, Pharaoh was asking, “What have you accomplished in your lifetime?” In this light, we can better understand Yaakov’s answer (verse 9): “Few and bad have been the days of the years of my life, and they have not reached the days of the years of my forefathers.” Perhaps Yaakov was not complaining, as some commentaries understand. Rather, he was humbly expressing his opinion that he was not as accomplished as his grandfather, Avraham, and his father, Yitzchak.] (Cheishek Shlomo p.257)