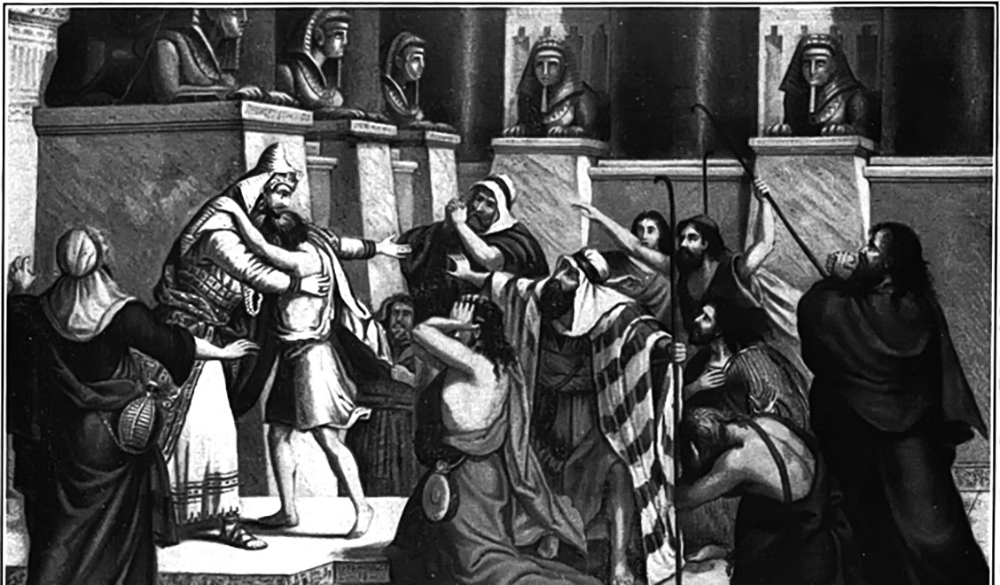 The biblical Joseph finally meets his brothers after being apart for 22 years. Accepting responsibility for their grievous action of selling Joseph into slavery and deceiving their father Jacob, the brothers did repentance by saying, ”Alas, we are at fault...because we looked on at his anguish, yet paid no heed as he pleaded with us." (Genesis 42:21)

I have known more than my share of families that are torn by discord. I think most of us, perhaps even all of us, are familiar with families in which brothers and sisters have not spoken to each other in years, sometimes even having forgotten the original reason for the destruction of their relationship. My background and experience in the field of family therapy has given me even broader exposure than most to this unfortunate phenomenon.

Colleagues of mine in the practice of psychotherapy will concur that overcoming feelings of hatred and urges toward revenge is one of the most difficult challenges that they face in their practice. Reconciling parents and children, husbands and wives, is a frustrating process for those of us who counsel families. The successful reconciliation of ruined relationships is a rare achievement, especially after the misunderstandings have festered for years.

The great 18th century moralist, Rabbi Moshe Chaim Luzzato, contends that these difficulties are intrinsic to our human nature. Thus he writes:

“Hatred and revenge. These, the human heart, in its perversity, finds it hard to escape. A man is very sensitive to disgrace, and suffers keenly when subjected to it. Revenge is sweeter to him than honey; he can not rest until he has taken his revenge. If, therefore, he has the power to relinquish that to which his nature impels him; if he can forgive; if he will forbear hating anyone who provokes him to hatred; if he will neither exact vengeance when he has the opportunity to do so, nor bear a grudge against anyone; if he can forget and obliterate from his mind a wrong done to him as though it had never been committed; then he is, indeed, strong and mighty. So to act may be a small matter to angels, who have no evil traits, but not to ‘those that dwell in houses of clay, whose foundation is in the dust.'” (Job 4:19) (Mesilat Yesharim [The Path of the Upright], Chapter 11)

Granted that one must approximate the angels in heaven in order to overcome the natural human inclinations to hate and take revenge. How, then, do we explain the astounding reconciliation between Joseph and his brothers, which occurs in this week’s Torah portion? (Genesis 44:18-47:27)

Joseph’s brothers came to hate him because of what they saw as his malicious arrogance. Joseph certainly had reason to hate his brothers, who cast him into a pit full of snakes and scorpions. We can easily understand that he would attribute his years of imprisonment to their betrayal of him. And yet, in last week’s Torah portion, we learned that they came to regret their actions and to feel guilty for what they did to him. “Alas, we are at fault…because we looked on at his anguish, yet paid no heed as he pleaded with us.” (Genesis 42:21)

It is in this week’s parsha that we learn of the forgiveness that Joseph demonstrated toward his brothers. We read of a dramatic, reconciliation—a total triumph over hatred and revenge. What inner strengths enabled Joseph and his brothers to attain this rare achievement?

I maintain that quite a few such strengths help Joseph’s brothers to rejoin him harmoniously. One was their ability to accept responsibility for their actions. Over time, they reflected introspectively and concluded that they were indeed wrong for what they did. Self-confrontation, and a commitment to accepting the truth when it surfaces allowed them to forget whatever originally prompted them to hate Joseph.

I further maintain that the underlying dynamics of Joseph’s ability to forgive were very different. He came to forgive his brothers because of two fundamental aspects of his personality: his emotional sensitivity and his religious ideology.

Joseph’s sensitivity becomes apparent to the careful reader of this and last week’s Torah portions. The most reliable indication of a person’s sensitivity is his ability to shed tears of emotion, his capacity to weep. Joseph demonstrates this capacity no less than four times in the course of the biblical narrative:

Subsequent to his initial encounter with his brothers, we read that “he turned away from them and wept…” (Genesis 42:24); when he first sees his younger brother Benjamin, “he was overcome with feeling…He went into a room and wept there…” (ibid. 43:30); unable to contain himself after Judah’s confrontational address, “his sobs were so loud that…the news reached Pharaoh’s palace…” And finally, as we will read in next week’s Torah portion, this is Joseph’s response to his brothers’ plea for explicit forgiveness: “and Joseph was in tears as they spoke to him.” (ibid. 50:17).

No doubt about it. The biblical text gives us conclusive evidence of Joseph’s emotional sensitivity. But there is another secret to Joseph’s noble treatment of his brothers. It relates to his philosophy, not to his emotional reactivity.

If there is one lesson that Joseph learned from his father Jacob during his disrupted adolescence, it was the belief in a divine being who ultimately controls man’s circumstances and man’s destiny. When a person wholly has that belief, he is able to dismiss even the most painful insults against him. He is able to attribute them to God’s plan and not to blame the perpetrators of that insult. Thus was Joseph able to say, “So, it was not you who sent me here, but God…” (ibid. 45:8)

The power of genuine faith to instill the awareness that even hurtful circumstances are part of the divine plan is, in my opinion, best described in this passage from the anonymous 13th century author of Sefer HaChinuch, in his comments on the commandment to desist from revenge:

“At the root of this commandment is the lesson that one must be aware and take to heart the fact that everything that happens in one’s life, whether it seems beneficial or harmful, comes about because of God’s intervention…Therefore, when a person is pained or hurt by another, he must know in his soul…that God has decreed this for him. He should not be prompted to take revenge against the perpetrator, who is only indirectly the cause of his pain or hurt. We learn this from King David who would not respond to the traitorous curses of his former ally, Shimi ben Gera.”

The author of Sefer HaChinuch sees King David as the exemplar of this profound religious faith. In these final Torah portions of the Book of Genesis, we learn that Joseph was King David’s mentor in regard to the capacity to rise above the misdeeds of others and to see them as but part of God’s design.

It is not easy for us lesser believers to emulate Joseph and David, but we would be spared much interpersonal strife if we would at least strive to do so.