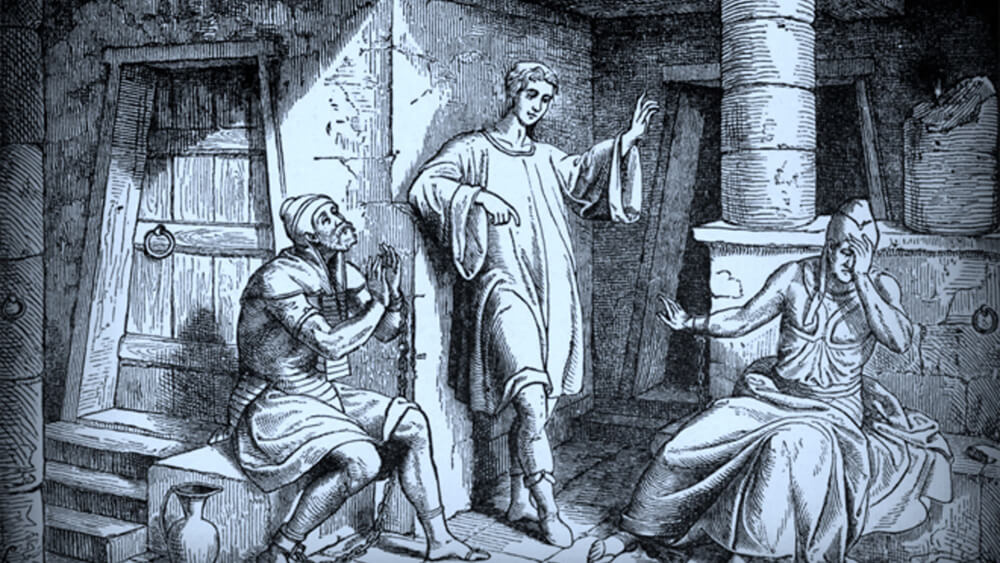 Joseph knew he might never have another chance to get out of the dank Egyptian dungeon in which he had languished since being wrongly accused of making advances toward Potiphar’s wife. Indeed, he was fortunate to have escaped with his life. One year after his incarceration, he was joined by two illustrious prisoners, the royal baker and the royal cupbearer, both of whom had fallen from favor. One night they both had dreams that called for interpretation. This was Joseph’s opportunity, and he had to grasp it.

As we read in this week’s Torah portion, Joseph interpreted their dreams correctly, one thing led to another, and he was released from prison. The cupbearer dreamed he saw three bunches of succulent grapes on the vine. He squeezed the grapes into Pharaoh’s golden chalice and brought it to him. What did this mean? It meant, explained Joseph, that in three days he would be released and returned to his former position.

The baker had a very similar dream. He saw himself carrying three baskets of bread on his head, and in the top basket, there were also all sorts of fine pastries. Then he saw a bird swoop down and eat the pastries. What did this mean? It meant, explained Joseph, that in three days the baker would be hung from the gallows.

And indeed, both interpretations proved correct.

Why did Joseph present such radically different interpretations of two dreams that were essentially identical?

The commentators point out a subtle difference between the two dreams. The images with which the cupbearer’s dream opened were of clusters of gleaming grapes hanging heavily from the vine and fairly bursting with natural juices. The cupbearer reaches out, plucks some of these exquisite grapes and squeezes them into Pharaoh’s chalice. Then he offers the wine to the king.

The baker’s dream, however, did not open with images of golden wheat stalks swaying in the gentle breeze on amber fields. Nor did it open with sparkling waters coursing through a mountain stream. It opened with basketfuls of the finished product, manufactured by human hands.

Where was an acknowledgment of the origin of all the ingredients that went into those breads and pastries? The cupbearer dreamed of the Almighty’s pristine grapes, but the baker dreamed of his own craft, as if everything depended on him. Where was the recognition of the handiwork of the Almighty? Clearly, the baker, unlike the cupbearer, did not deserve a royal pardon.

A great sage was walking with a young disciple along the seashore in a famous and wealthy resort town.

“What do you think of this place?” the sage asked.

“I think it is spectacularly beautiful.”

“Indeed? And what exactly do you find beautiful here?”

“Why, everything,” the disciple responded excitedly. “The gleaming white yachts in the harbor. The magnificent villas and chateaux on the hillsides. The elegant carriages with their liveried drivers and footmen.”

“Ah, my young friend,” said the sage, “you are like a blind man. All this superficial beauty obscures the true beauty of this place for people like you. Don’t you see the surging sea and the soaring mountains? Don’t you see the green valleys, the meadows, the flowers, the butterflies, the birds that sing in the trees? Those are the work of the Creator. Let me see one of your villa builders do something like that!”

In our own lives, living in a modern, technological society, we are easily distracted from the magnificent world the Almighty created for us. We look around and all we see are buildings, cars, telephones, computers, asphalt, concrete, with a little patch of green here and there. In such an environment, it is easy to lose sight of the guiding hand of Hashem and become deluded into believing that people control their own destiny. But that is very superficial attitude. Better that we open our eyes and take a good look at the world around us and the heavens above. How can we not be dwarfed by the immensity of what Hashem has wrought on our behalf? If we engender this recognition in our hearts, we will, like the cupbearer, be worthy of divine blessings and delivery from our oppressors.