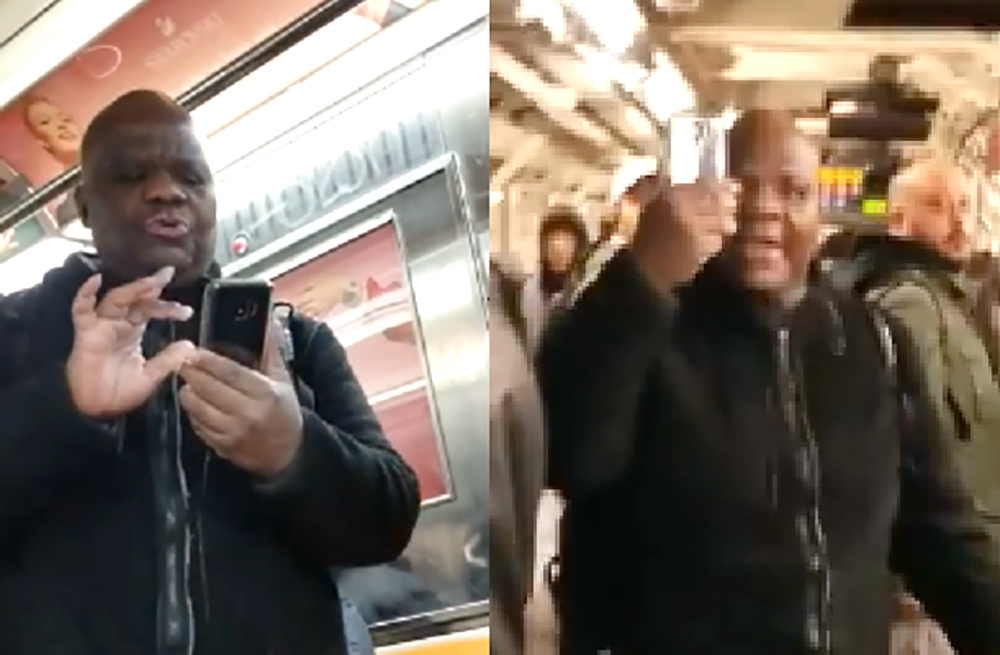 Suspect who harassed a Jewish college student on the New York subway. (screenshot)

A 20-year-old college student wearing a yarmulke was attacked on the New York City Subway on Dec. 29.

Yonatan Herzfeld was taking the S train from Grand Central Station to Times Square at approximately 3:30 p.m. when he was chased off the subway car by an African-American male.

The middle-aged man was “shouting about my kippa and drawing a circle, referring to my kippa [skullcap] saying, ‘what’s that you got on your head,’” Herzfeld said.

As the situation escalated and the assailant shouted more slurs, Herzfeld took out his phone to record the anti-Semitic incident.

“I wanted to have evidence for whatever he was about to do,” said Herzfeld, a student at Stony Brook University. “He then chased me off the train so fast I couldn’t even grab my suitcase and I had to circle back into the train to get it. The train closed and I stood as far from him as I could.”

Herzfeld ran away from the suspect, shouting for help on the subway platform in the middle of one of New York City’s busiest stations. However, no one attempted to help him. In videos posted on Facebook, witnesses are seen staring at the student while he runs across the platform.

“No one did anything when I was screaming for help,” he said. “Many were yelling at me to stop filming him, telling me that I brought the incident upon myself.”

Herzfeld believes the man was simply set off by the fact that he was wearing a yarmulke.

“When the train pulled up to Times Square, he was in the car ahead of me, and the only way out was to get past him,” Herzfeld explained. “But he kept coming closer towards me, so I was backing up closer and closer to the wall until there was no more room.

“I screamed ‘help’ several times at the top of my lungs, and that startled him for a few seconds, which gave me enough time to use my suitcase as a shield and push past the mobs of people. They all stood frozen.”

Herzfeld filed a complaint to the New York City Police Department shortly after the incident. Anyone with information about the suspect is encouraged to call the NYPD hotline at 800-577-TIPS.

This is the latest in a series of anti-Semitic incidents during Chanukah. On Saturday evening, a man attacked a Hasidic Chanukah celebration in Monsey, New York, just north of New York City. The suspect, Grafton E. Thomas, pleaded not guilty to five counts of attempted murder and a count of burglary.

President Donald Trump condemned the “horrific” attack, saying in a tweet Sunday, “We must all come together to fight, confront and eradicate the evil scourge of anti-Semitism.”

Andrew Cuomo, governor of New York, said the incident should be considered a form of domestic terrorism.

“I believe the situation has gotten so bad, frankly, that we need to increase our legal enforcement,” Cuomo said. “Anti-Semitism, bigotry and hate of any kind are repugnant to our values and will not be tolerated in our state.”

Overall, there were at least 13 reported incidents of anti-Semitism in New York throughout December.