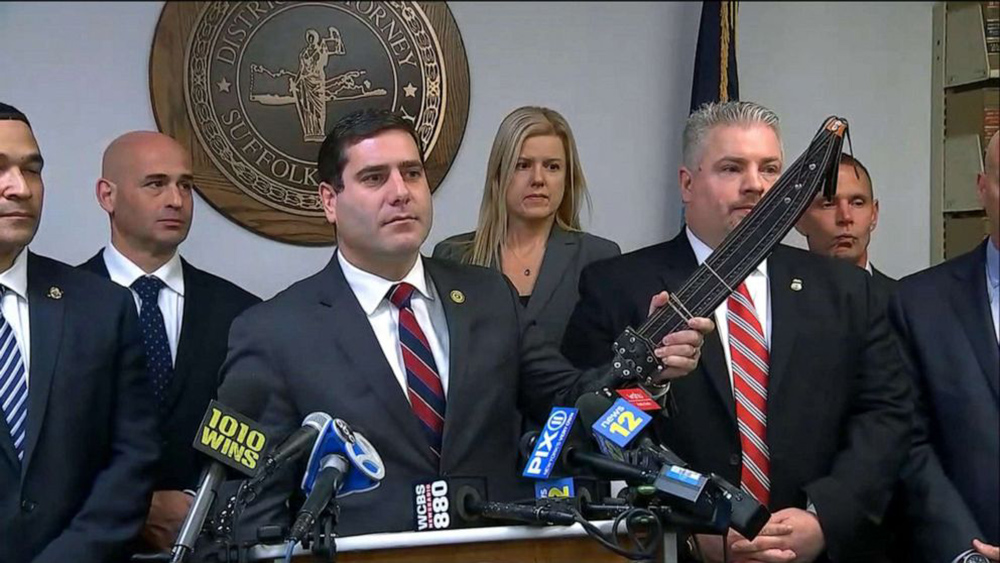 Officials say 96 alleged members of the feared gang MS-13 Gang have been charged with a laundry list of crimes on Long Island. Photo Credit: ABC News

Officials say 96 alleged members of the feared gang MS-13 Gang have been charged with a laundry list of crimes on Long Island.

“Over the course of 150 pages, the indictment described a remarkably vast criminal enterprise. There were seven murder plots with guns, machetes and Molotov cocktails. There were assaults in bars, meetings in local bakeries and gang initiations with 13-second beatings,” the New York Times reported. “Men with nicknames like Droop and Broccoli were said to have dealt in crack cocaine, fentanyl and oxycodone. Gang members had to adhere to a 20-point list of rules and regulations, including one that stated that to move up in the ranks, members had to commit at least four murders.”

Suffolk County District Attorney Timothy Sini talked to the press about a sweeping indictment that he said “decimated” the gang’s leadership and drug suppliers on Long Island.

“He described the case as the largest of its kind against MS-13 in New York, where the gang has been blamed for dozens of killings since 2016,” noted CBS News. “A two-year investigation by state and federal authorities thwarted more than a half-dozen murder plots, Sini said, and also provided authorities insights into the gang’s structure and recruiting patterns. The investigation was bolstered by an expansive wire tap in which the authorities monitored calls from more than 200 phone numbers.”

Sini told reporters at a press conference that “the hit dismantled virtually every aspect of the El Salvadoran-based gang’s criminal activities. “The goal of this investigation was to deliver a major blow to the gang’s leadership, operations and recruitment in our region … we did exactly that,” Sini explained to reporters, according to TheBlaze. “[It was the] largest wiretap operation in the United States.”

The lion’s share of the credit for the busts, most insiders maintain, goes to the Trump administration, which has made squashing the criminal gang a priority for the past three years. “The Department of Justice designated MS-13 as a priority for the Organized Crime Drug Enforcement Task Force, to allow federal law enforcement to utilize an expanded toolkit in its efforts to dismantle the organization,” the administration’s web site notes. “The United States, El Salvador, Guatemala, and Honduras have charged more than 4,000 MS-13 and 18th Street gang members in the United States and Central America, including the alleged leader of MS-13’s “East Coast Program.”