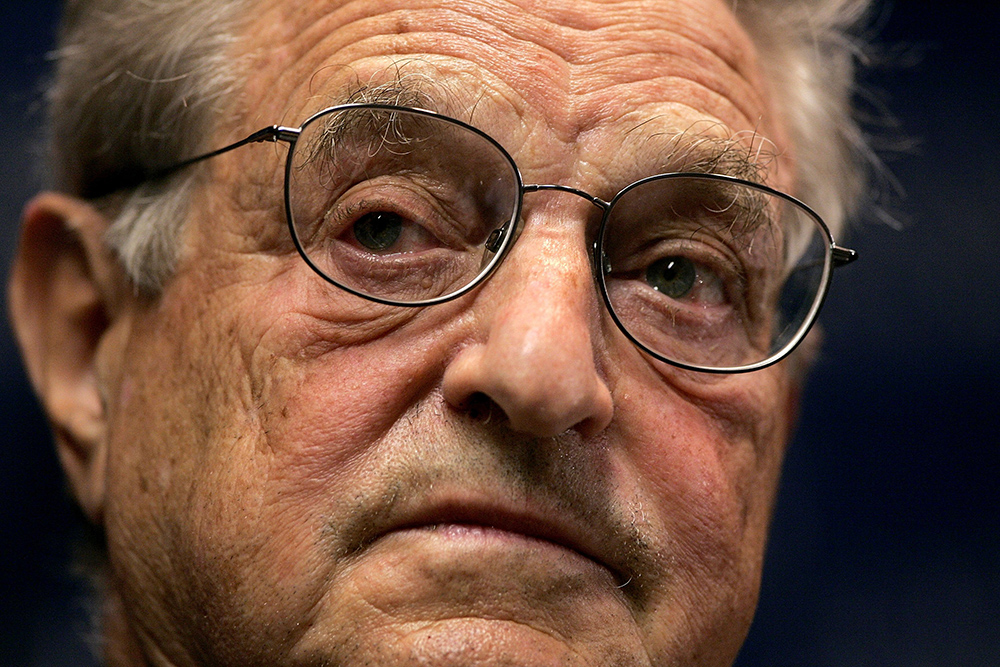 The other day, Rudy Giuliani said that George Soros (pictured above) is hardly a Jew and that Rudy is more a Jew than Soros. The Obama Jews who run leftist organizations like the Obama-lite Anti-Defamation League went wild, coming down hard on Rudy. Photo Credit: Win McNamee/Getty Images

Soros and Sanders are apostates, and despicable. Rudy is a great friend. Although his comments have been criticized on the Left, his remarks actually were spot on

The other day, Rudy Giuliani said that George Soros is hardly a Jew and that Rudy is more a Jew than Soros. The Obama Jews who run leftist organizations like the Obama-lite Anti-Defamation League went wild, coming down hard on Rudy.

Of course. Jonathan Greenblatt, the former Obama official who turned the ADL into an Obama-lite operation, knows “nothing from nothing” (as my grandparents would say) when it comes to Judaic authenticity.

The reality is that Soros indeed is an apostate and, if these were times when Torah values defined the Jewish world, Soros formally would have been excommunicated by now. (Technically, since Jews do not do “communion,” we do not “excommunicate.” Rather, we put apostates are under a ban, a cherem.) Thus, although the chances of Soros showing up in my synagogue are less than nil, the fact is that, if he did, he would be in cherem. He would not be allowed near the Torah scroll or the Holy Ark. If he had come to recite a kaddish in memory of his Nazi Guardian whom he assisted in his teens, keeping records for that Nazi of property the Nazis confiscated from Jews, the apostate would be escorted out the door.

Same with the Communist Bernie Sanders, enemy of Israel. It is a requirement of Jewish law that certain prayers may be recited only in the presence of ten or more Jewish men. If Bernie Sanders were to show up in my shul — again, less than no chance — and if we had nine other Jewish men in the sanctuary at the time, we still would not be able to recite certain prayers that require ten men because we would not count him as a Jewish man.

Of course we could not count Rudy either because a Jewish person is someone who either is born to a Jewish mother or who converts to Judaism according to Torah law. So Rudy is not really more Jewish than Soros, just as President Trump is not really more Indian than is Elizabeth Warren.

But his figurative point is well made. We would accord Rudy every conceivable honor. We would welcome him to sit in the front row. We would honor him. By contrast, if Soros or Sanders were to show up, we would have to call security very quickly — to protect them from the members of my congregation. Soros and Sanders are apostates, despicable. Rudy is a great friend. Although his comments have been criticized on the Left, his remarks actually were spot on.

The Left uses defamation when they have nothing else — and they typically have nothing else. So they will use the term “racist” to attack very fine people who are not at all discriminatory but actually are good and decent. They call others “homophobes” even though the targets of the defamation bear no ill will against such individuals. Most famously, Hillary Clinton went on her diatribe, packaging all conservatives into a “basketful of deplorables.” Her comment was epically stupid and dishonest, helping her lose the 2016 Presidential election.

Those on the Left aim to protect enemies of Israel like George Soros and Bernie Sanders by setting up a defensive wall for the evil they espouse, calling criticisms of them “anti-Semitic.” But it is not anti-Semitic to call out despicable louts like Soros and Sanders for the damage they seek to do to society. Each is deeply evil. Each is surrounded by evil. Each perpetrates evil.

Soros, for example, uses his vast amounts of money to try electing in targeted American cities local district attorneys who turn law enforcement on its head, freeing imprisoned thugs and refusing to prosecute criminals. Similarly, he has thrown around his money to prop up JStreet, perhaps the worst enemy Israel has in Washington, D.C., an organization that offers a venue and microphone to politicians who want to attack Israel and threaten to cut off American support for Israel. Soros has given JStreet close to a million dollars.

How can it be “anti-Semitic” to call out George Soros for the evil he represents? Orthodox rabbis all over the world despise him. Supporters of Israel despise him. Indeed, it would seem that the real anti-Semitism lies in those who look at all the evil that Soros perpetrates and then defend him by seeing his actions as somehow reflecting those of a Jew. Why do his defenders see him as a Jew? At most, he is a Jew in name only. And actually not even that — because his family changed their Jewish name “Schwartz” to “Soros” as part of seeking to get through the Holocaust by presenting as non-Jewish. So, upon reflection, Soros is not even a “Jew in name only.”

After each virulently anti-Semitic tirade, outburst, Facebook post or tweet that gets an Ilhan Omar, Rashida Tlaib, or Linda Sarsour into trouble with decent people, Bernie Sanders races in to defend them. Yet he is quick to defame those prominent in defending Israel, calling Israel’s Prime Minister “racist” and calling for America to redirect huge amounts of its Israel support towards the Hamas-led government of Gaza that unabashedly aims to destroy Israel. Of course Jew-haters and Israel haters flock to support Bernie Sanders.

The Anti-Defamation League now is an Obama-lite organization, run by people from within the Obama Administration who flocked to ADL after the end of that chapter. It is not a reliable arbiter of who is anti-Semitic.

One simply looks at Rudy Giuliani’s life-long relationship with Israel and even at how he emerged to defend the local Jewish community of New York, where he was mayor after the Sharpton pogroms under the prior David Dinkins Administration, and sees in Giuliani a life-long dear friend of the Jewish community. By contrast, one looks at George Soros and sees an enemy of Jewish survival. The dichotomy is so obvious that it calls into question the ulterior motives of any person or organization that would describe criticisms of Soros and the money that he wields despicably and for evil purposes as “anti-Semitic.” Soros is evil. And anyone who defends him by invoking his Jewish lineage is himself anti-Semitic.

(this article originally appeared on the Arutz Sheva (Israel National News) web site. Here is the link to the article: http://www.israelnationalnews.com/Articles/Article.aspx/24942

The writer is adjunct professor of law at two prominent Southern California law schools, Senior Rabbinic Fellow at the Coalition for Jewish Values, congregational rabbi of Young Israel of Orange County, California, and has held prominent leadership roles in several national rabbinic and other Jewish organizations. He was Chief Articles Editor of UCLA Law Review, clerked for the Hon. Danny J. Boggs in the United States Court of Appeals for the Sixth Circuit, and served for most of the past decade on the Executive Committee of the Rabbinical Council of America. His writings have appeared in The Weekly Standard, National Review, Wall Street Journal, Los Angeles Times, Jerusalem Post, American Thinker, Frontpage Magazine, and Israel National News. Other writings are collected at www.rabbidov.com .