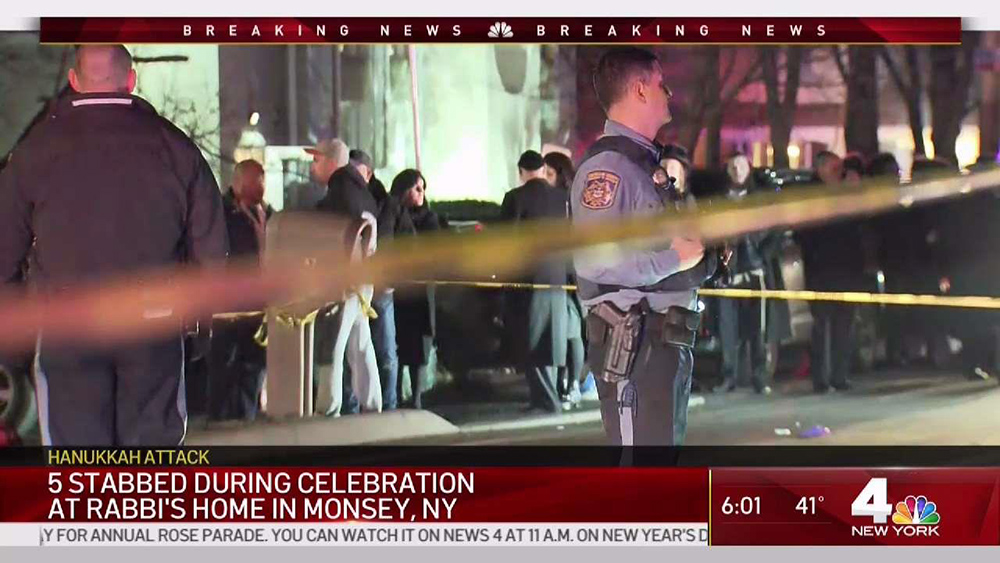 Stabbing attack in Monsey on the 7th night of Chanukah. Photo Credit: NBC

I fear it is too late, except for the one country that will remain a “light unto the nations”–Israel. The enemy has infiltrated our culture everywhere else.

Response to Phyllis Chesler’s Op-ed: Is it too late to clear the antisemitism swamp?

Phyllis, you have written a sad but true missive that, to those of us who have accompanied you into the trenches of this culture war for the last 15 years or more, is completely true. You have been a great leader in this cause, just as you were in the cause of women’s rights.

How does one answer your question about whether it is too late?

I knew it was too late when my book The Second Catastrophe, warning against a Second Holocaust, (this time at the hands of the Iranians and their allies) was banned in 2003 by Canada;s monopoly Jewish-owned book chair, due to taqiyyah from an 18 year old book clerk, member of the Muslim Brotherhood directed Muslim Students Association–and no Jewish or civil rights organizations would speak out.

I knew it was too late when I lived in Israel for two months during the Second Intifada researching my book, and bombs went off around me every day..

I knew it was too late when my cousin joined JStreet.

I knew it was too late when my pleas to end Israel Apartheid Week were ignored by university presidents and Jews alike.

I knew it was too late when I had to write about Tolerism.

I knew it was too late when I had to write about Submission to the Islamists.

I knew it was too late when no one would use the term “classical liberal”.

I knew it was too late when “conservative” became an epithet hurled at those trying to promote Good over Evil.

I knew it was too late when a small town lawyer and property developer had to start Canada’s sole conservative and pro-Israel publishing house because the mainstream publishers were shunning those not “politically correct”.

I knew it was too late when more people think “relativism” has something to do with geneology and DNA than understanding what moral and cultural relativism is and why it is destroying the greatness of western civilization.

I knew it was too late when my documentary, “Conservative Authors in Canada” featuring a black female Evangelical host, a white Jewish female, a dissident Muslim professor, an elderly white Christian male retired professor, and myself as the white Jewish male, was shunned by all media (except YouTube).

I knew it was too late when Facebook started censoring content that some California anti-Israel leftists found objectionable.

I knew it was too late when Google searches showed only links to CNN, NY Times, Washington Post, MSNBC on the first page of the search results.

I knew it was too late when Wikipedia, with anti-Israel content providers and editors, became the main source of student research.

I knew it was too late when Jonathan Pollard was sentenced as if he committed treason when he gave information to an ally, and he is still being kept in the U.S. after so many years, when he just wants to move to Israel for his few remaining years.

I knew it when Steven Spielberg and Tony- Kushnir made a seriously anti-Israel movie, Munich, and 99% of movie goers did not see it for the propaganda that it was. (see my chapter in Tolerism).

I knew it when America’s Jewish politicians like Schiff, Nadler, Schumer, Blumenthal et all act more like kapos than part of our people.

And yet, we continue on, hoping, praying, taking tiny steps, hunching over our computers, ostracized , marginalized, powerless in a world that worships power. I was talking to the great Diane Bederman who is banned from Facebook regularly for gentle pro-Israel and anti-Islamist writing. She is on a four month suspension, apparently for sharing Phyllis’ essay, above, with her hundreds of Facebook friends, and being told she was sending out “spam”.

As Diane, in one of our depressive moods told me recently, we shall keep fighting until they put us back in the ovens. Of course, it won’t get to that, because we shall, in a world where the Leftist-Islamist globalist alliance takes over the West, move to Israel and fight back, this time with high technology and nuclear weapons.

But yes, Phyllis, I fear it is too late, except for the one country that will remain a “light unto the nations”–Israel. Unfortunately, those other Western nations won’t recognize that until after World War 3. After that bloody war (which has already started) the West will carry on. World War 3 will result in the death of tens of millions–caused by the war against goodness and morality brought on by the Leftist/Islamist/Globalist alliance. It may be too late to stop it, as the enemy has infiltrated our culture first.

In the mid-’60s, I was one of those who liked to listen to Bob Dylan and I close with a song of his that has a Kabbalistic reference (which I explained in Second Catastrophe–hint–”I was born here and I shall die here against my will”) so that you can listen to it and read the words.

Not as profound as our religious texts but something else with which we can commiserate.

Howard Rotberg is the Canadian founder of Mantua Books publishers and author of 4 books. Previously authoring The Second Catastrophe: A Novel about a Book and its Author, Exploring Vancouverism: The Political Culture of Canada’s Lotus Land, TOLERism: The Ideology Revealed (in its second (revised) edition), he now shares his solution to the ever-increasing woes begotten by the West’s ‘tolerism’ in his latest book, The Ideological Pathway to Submission: …and what we can do about it.