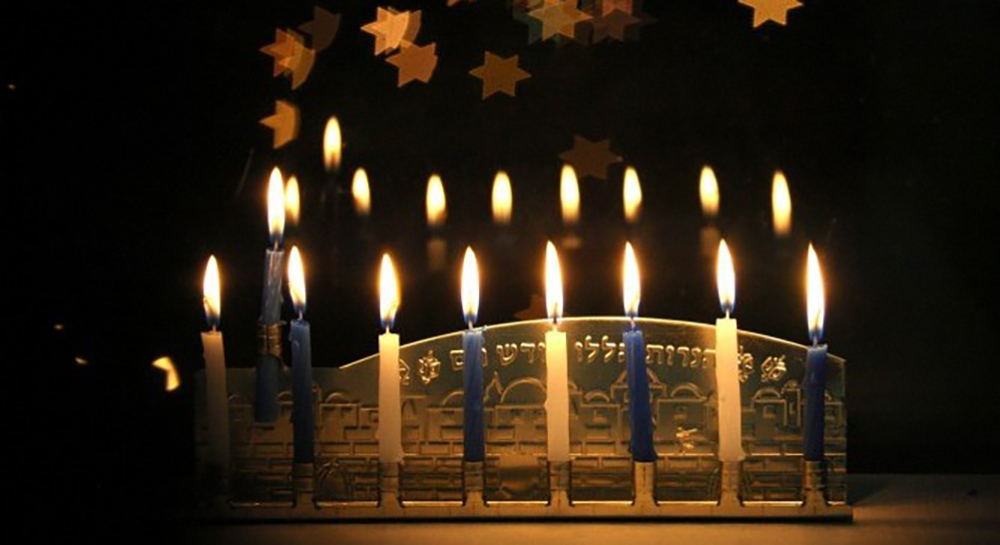 Do you know where the word ‘dreidel’ comes from, and how many calories are in a sufganiyah? ISRAEL21c has the answers

There are at least 44 candles in each box of Hanukkah candles, enough for one person to light the hanukkiyah (see item six on this list) according to tradition every night. Some boxes include extra candles as they tend to break easily.

Today, candles come in a variety of colors, wax types, and even scents. You can also fulfill the mitzvah of lighting the hanukkiyah with oil. 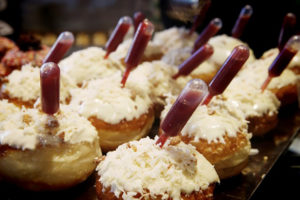 Watch those calories! Photo by Flash90.

When you eat holiday treats fried in oil, you can’t really expect for them to be fat-free. The average 100-gram sufganiyah (doughnut) packs 400-600 calories. One potato latke has about 150 calories, svinge (a Moroccan cruller) 350-442 calories, and chocolate coins 85 calories each.

Israelis devour some 24 million sufganiyot during the eight-day holiday – adding up to 10.8 billion calories.

Hanukkah also goes by the names of the Festival of Lights and Feast of Dedication. As if multi-names weren’t enough, the holiday also has a variety of transliterated English spellings — thanks to the guttural Hebrew sound of the first letter, which cannot be rendered properly in English.

Get your spinning finger ready: It’s time to remember when the Greeks were in town and forbade Jews to learn Torah. Tradition holds that kids used to meet up in secret to learn, but if a Greek soldier happened upon their meeting they would pretend to be gambling with their dreidels.

Israeli author/politician Avram Burg is said to have the largest dreidel collection in the world, counting more than 3,500.

Dreidel, by the way, is a Yiddish word which comes from ‘drei’ – to turn or spin. The dreidel (a special spinning top for Hanukkah) features four Hebrew letters. In Israel, the letters are Nun, Gimel, Hay and Peh. Abroad, they’re Nun, Gimel, Hay, Shin. The letters stand for the Hebrew phrase “A great miracle happened there (for those outside of Israel)/here (for those in Israel). 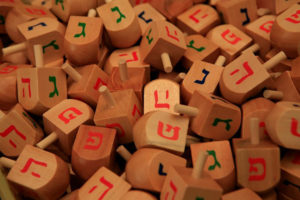 Dreidels are an essential part of the Hanukkah holiday. Photo by Flash90

Though it is one of the most well-known and celebrated Jewish festivals, Hanukkah is actually a more minor holiday, according to religious tradition, than Passover, Rosh Hashana or Yom Kippur. The holiday is not even mentioned in the Torah.

Some say Hanukkah gained popularity in the late 1800s among American Jews because of the season in which it falls – usually around Christmas. Hanukkah always begins on the 25th day of Kislev on the Hebrew calendar. The corresponding Gregorian date varies.

Others point to the fun aspect of the holiday as the reason for its popularity. Maimonides wrote that the mitzvah of lighting the hanukkiyah is even more important than buying wine for Sabbath.

Tradition states that the hanukkiyah should have all candles or wicks at the same level, with only the shamash – the ninth candle or wick, for lighting the other eight – a bit higher or lower.

GPS navigation could help when organizing the hanukkiyah. According to accepted rules, you should place the candles right to left to correspond with the direction in which you read the Hebrew language. But you should light the candles from left to right, giving more attention to the new candle first.

Today, the US president and first lady host an annual Hanukkah party for hundreds of American Jewish politicians, organization heads and school and yeshiva deans. But that wasn’t always the case. 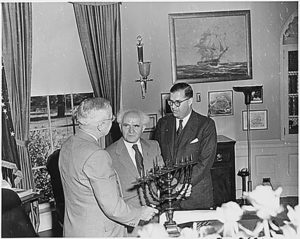 Hanukkah made its first appearance at 1600 Pennsylvania Avenue in 1951, when Prime Minister of Israel David Ben-Gurion gave Harry Truman a menorah as a gift. In 1979, Jimmy Carter became the first American president to recognize the holiday publicly by speaking at a candle-lighting event hosted by Chabad Lubavitch.

Ronald Reagan often spoke about the holiday and George H.W. Bush attended a Hanukkah party for staff in the Executive Office Building, in 1991. Two years later, Bill Clinton hosted a candle-lighting ceremony in the White House with his staff.

President Barack Obama not only continued the tradition but added a new one: the Obamas host Passover Seders in the White House as well. But that’s another holiday story.