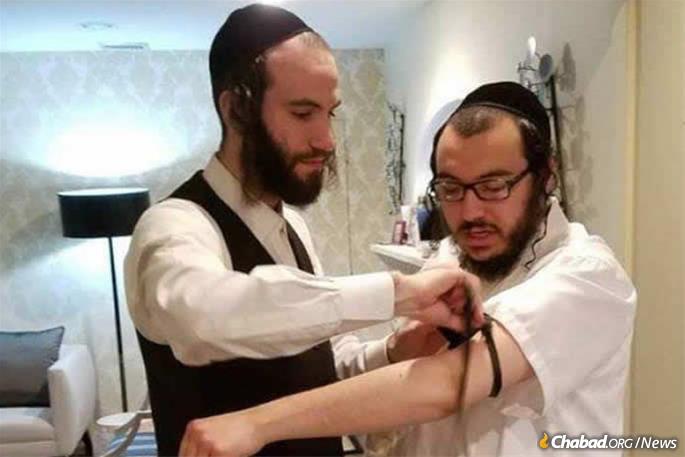 In the wake of a deadly anti-Semitic attack, video emerged of Jersey City residents at the crime scene railing against Jews and expressing delight at the carnage.

World Israel News reported that in one of the clips, a young man asks a Jewish first responder, “Four [Jews] are dead, right? If they’re dead and they got shot, that’s great.”

Another bystander comments, “I blame the Jews! We never had a shooting like this until they came here.”

“We can’t do it to them?” she added, referring to the attack as “Jew shenanigans.”

WIN also reported that another person can be heard yelling, “Get the damn Jews the f**k out of here! Get the Jews out of Jersey City.”

Hikind commented on the footage, “As Jewish bodies were still laying in cold blood after being murdered by terrorists in Jersey City, a representative of Americans Against Anti-Semitism captured spontaneous anti-Semitic tirades blaming Jews for their own murder and people cheering it on.”

Two of the victims at the store were identified by members of the Orthodox Jewish community as Mindel Ferencz, who with her husband owned the grocery, and 24-year-old Moshe Deutsch, a rabbinical student from Brooklyn who was shopping there. The Ferencz family had moved to Jersey City from Brooklyn.

The funerals for the two Orthodox Jewish victims in the Jersey City shooting attack were held on Wednesday night. Thousands turned out for the two funerals.

Jersey City Mayor Steven Fulop on Wednesday announced that the kosher grocery had been specifically targeted.

In the aftermath of the shooting, the New York Times reported that one of the perpetrators, who was identified as David Anderson, posted anti-Semitic and anti-police content online and was affiliated with the Black Hebrew Israelite movement, a hate group that, despite its name, promotes virulently anti-Semitic conspiracies and advocates violence, as was reported on the World Israel News web site.

The Black Hebrew Israelites are in no way affiliated with any stream of Judaism or the mainstream Jewish community.

For decades, adherents of the sect have stood in New York’s Times Square accosting Jews and other passersby. The group made the news in January when a video surfaced of members in Washington, D.C. calling high school students “crackers” and “faggots.” Hate group watchdogs have warned about the dangers of the Black Hebrew Israelites since at least 2008.

Investigators also are scouring social media postings of at least one of the gunmen in search of a motive, said the official, who spoke on condition of anonymity because the investigation is still going on.

Yeshivah World News reported that the shooting began near a cemetery, where Detective Joseph Seals was killed while trying to stop “bad guys,” Police Chief Michael Kelly said without elaborating.

The killers then drove a stolen rental van over a mile to the kosher market, where they waged a drawn-out battle with police that filled the streets with the sound of high-powered rifle fire and turned the city into what looked like a war zone, with SWAT officers in full tactical gear swarming the neighborhood.

A first responder from a Jewish organization who was present of the deadly shooting attack in Jersey City told Arutz Sheva on Wednesday that authorities found 300 rounds of ammunition and three pipe bombs in the U-Haul van the shooters were driving.

“I came here about an hour after the shootout finished. I was one of the first to respond to the command,” said Isaac Wollner, a member of the local Chesed Shel Emes organization.

“A U-Haul van found nearby contained some 300 rounds of ammunition and three pipe bombs,” he said.

According to the AP, when the standoff ended, the police entered the grocery store and found the bodies of those they believed were the two gunmen and three other people who apparently happened to be there when the assailants rushed in. Police said they were confident the bystanders were shot by the gunmen and not by police.

Offering her sagacious insights into the tragic murders in Jersey City, Professor Phyllis Chesler told the Jewish Voice, “What else can people expect after so many years of anti-Jewish and anti-Israel propaganda; after so many years of Islamic funded hate. It is now totally out of control and I am not sure that legislation so late in the day can put this diabolical genie back in the proverbial jar.”

Dr. Chesler speaks from decades of rigorous personal research on the subject of burgeoning anti-Semitism in the Western world. She is the author of the critically acclaimed monograph titled, “The New Anti-Semitism” which was originally published in 2003.

In this intensely passionate and compelling book, Dr Chesler demonstrates how old-fashioned anti-Semitism — now often seen in the form of anti-Zionism — has become fashionable and even politically correct, and how this plague threatens Jews in Israel, America, and throughout Western civilization.

Last night, Rabbi Moshe Schapiro, who directs Chabad of Hoboken and Jersey City with his wife Shaindel, was at the Jersey City Medical Center, visiting Chaim Deutsch, who was injured in the attack, and consoling community members gathered there. Deutsch had witnessed the murder of his cousin, Moshe Deutsch, and was struck multiple times before slipping out the back door of the store, according to an article on the Chabad.org web site. Together they reflected on the resilience of Jewish faith in the face of even the worst adversity, and belief in the world’s Creator.

Schapiro, who moved to Hoboken a week after the September 11th terrorist attacks in 2001, told Chabad.org: “If we are to uproot this scourge of evil and transform our world into a place of goodness and kindness, then we must nurture in our society an appreciation, from the youngest age, that we are each personally accountable for our moral conduct to our all-knowing and benevolent Creator, who also created every one of our fellow human beings in His image.”

In a related development, Yeshiva World News reported on Wednesday that in just three hours, the Orthodox Jewish community raised a whopping $25,000 for the family of Jersey City Police Detective Joseph Seals.

Around 820 generous Orthodox Jews opened their pockets and donated – to a fund on The Chesed Fund platform – to show their support to law enforcement – and Detective Seals in particular.

Seals was a beloved police officer and was the department’s leading officer in removing guns from Jersey City’s streets. He  frequently worked in plain-clothes.

The veteran officer joined the Jersey City police force in 2006, according to department officials.

Shooting victim Mrs Leah Mindel Ferencz HY”D, 33-years-old, was one of the victims of the Jersey City shooting attack.

“Mindel Ferencz HY”D, was a pioneer. She and her husband were of the very first to relocate from Williamsburg, due to the sky-rocketing prices of housing, to settle in Jersey City.

They did not do it for themselves, but to pave the way for a new community that lives harmoniously with their neighbors.

She was a caring and nurturing mother for her three children, and at the same time helped her husband who ran the first kosher grocery in the area, to ensure that the community’s families have were to shop and feed their children.

A life of selflessness, and dedication to others, full of love, was cut short by vicious hate-filled murders.”

Shooting victim Moshe Hersh Deutsch HY”D. 24-years-old, was one of the victims of the Jersey City shooting attack. He lived in Williamsburg.

“We are heartbroken to inform you that one of the victims of yesterday’s horrific attack in Jersey City was our own dedicated volunteer, Moshe Hersh Deutch HY”D. Our thoughts and tefilos are with all those impacted by this senseless act of violence.”

“Moshe HY”D was learning in a Yeshiva he was instrumental in establishing and getting off the ground. He was extremely kind and generous and was the go-to person when his peers needed help. Moshe is also the son of our devoted and energetic board member, Abe Deutsch, who is a pillar of the UJO and is the main force behind the largest food distribution for Pesach, feedings thousands upon thousands. Abe’s kindness knows no bounds and even though he is occupied with managing a business, individuals needing assistance knock on his door regularly for help. Moshe followed in his father’s footsteps and devoted his spare time and energy to help organize the UJO Passover food distribution and many other acts of kindness.

The community lost a promising-upcoming charitable person who was spreading love and kindness. He was butchered by people filled with poisonous animosity. Our heart goes out to both families and to our board member, Abe.”

Jewish leaders and the Anti-Defamation League, which tracks anti-Semitic attacks, expressed concern about the deaths.

“The report from the Jersey City mayor saying it was a targeted attack makes us incredibly concerned in the Jewish community,” said ADL regional director Evan Bernstein. “They want answers. They demand answers. If this was truly a targeted killing of Jews, then we need to know that right away, and there needs to be the pushing back on this at the highest levels possible.”

YWN reported that New York City Mayor Bill de Blasio said on MSNBC that the attack was “clearly a hate crime,” while New York Gov. Andrew Cuomo pronounced it a “deliberate attack on the Jewish community.” They announced tighter police protection of synagogues and other Jewish establishments in New York as a precaution.

In the deadliest attack on Jews in U.S. history, 11 people were killed in an October 2018 shooting at a synagogue in Pittsburgh. Last April, a gunman opened fire at a synagogue north of San Diego, killing a woman and wounding a rabbi and two others.

The kosher grocery is a central fixture in a growing community of Orthodox Jews who have been moving to Jersey City in recent years and settling in what was a mostly black section of Jersey City, causing some resentment.

Mordechai Rubin, a member of the local Jewish emergency medical services, said the small Jewish community has grown over the past three or four years, made up mostly of people from Brooklyn seeking a “nicer, quieter” and more affordable place to live. Next to the store is a synagogue with a school and day care center where 40 students were present at the time of the shooting, he said. (WIN, YWN, Chabad, INN)