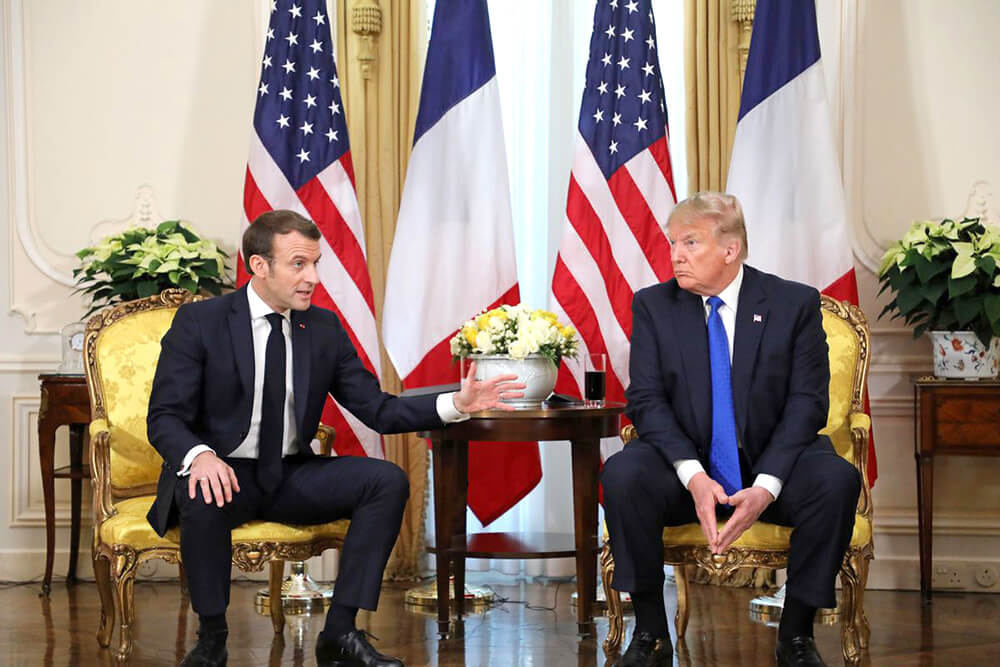 Arriving in London late on Monday for two days of NATO meetings with world leaders, President Trump called the trip “one of the most important journeys that we make as president” before departing Washington and noted Democrats had long known about the meeting. Pictured above is President Trump with France’s President Emmanuel Macron during their meeting at Winfield House in London on December 3, 2019. Photo Credit: Ludovic Marin/Pool/AFP via Getty Images

Arriving in London late on Monday for two days of NATO meetings with world leaders, President Trump called the trip “one of the most important journeys that we make as president” before departing Washington and noted Democrats had long known about the meeting, as was reported by the AP.

Trump said on Twitter that he had read the Republican report designed to counter Democrats’ impeachment case on his flight, according to the AP report. The report, which was obtained by The Associated Press, called Trump’s hesitation to provide military aid to Ukraine “entirely prudent.”

“Prior to landing I read the Republicans Report on the Impeachment Hoax. Great job! Radical Left has NO CASE. Read the Transcripts,” Trump wrote on Twitter. “Shouldn’t even be allowed. Can we go to Supreme Court to stop?”

As always, Trump raised the issue of NATO countries ‘paying their fair share” towards defense needs, rather than just depending on the financial support of the United States. Anxiety about Trump’s commitment to the continuation of NATO has been widespread amongst world leaders of NATO aligned countries. 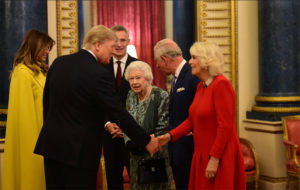 When asked by a reporter about Canada in terms of being delinquent in NATO spending, Trump said, “Slightly delinquent, I’d say, Canada, but they’ll be okay. I have confidence. They’re slightly delinquent. Some are major delinquent. Some are way below 1 percent and that’s unacceptable, and then if something happens we’re supposed to protect them and it’s not really fair and it never has been fair. They’re paying up. We are talking to Germany tomorrow and they’re starting to come along. They have to. They have to. Otherwise if they don’t want to I’ll have to do something with respect to trade.”

Trump also answered the same reporter’s questions concerning whether the US would defend a NATO country from attack if they were found to be delinquent in their responsibility to pay a portion for their defense. He said: “I’m going to be discussing that today, and it’s a very interesting question, isn’t it. It also depends on what your definition of delinquent is. For instance, if you have a country that’s paying only 1 percent. If you have some that are paying less than 1 percent and they’re wealthy countries on top of everything, now we go to a new year and they don’t pay, and now we go to yet another year and they don’t pay. Now, I ask you, do they have to pay for the back years? Okay?”

Earlier on Tuesday, Trump attended a NATO leaders’ meeting and took the opportunity to lambaste French President Macron for recently saying NATO was experiencing “brain death” as a result of diminished U.S. leadership in the alliance under Trump, according to an AP report. Trump also played down the impact his domestic troubles are having on his standing on the global stage.

The AP reported that prior to the sidelines meeting with Macron, Trump laced into the French president for what he said were “very, very nasty” comments. “I think that’s insulting to a lot of different forces,” Trump said. “It’s very disrespectful.”

Several hours later, the two leaders met one on one on the sidelines to see if they could iron out their differences and not allow the hostility between them to spiral out of control.

Prior to meeting with Macron, Trump held a press conference in which he hinted about what would be discussed at the meeting. We’ll be talking about a lot of things, including NATO and including trade. We do a lot of trade with France, and we have a minor dispute. I think we’ll probably be able to work it out. But we have a big trade relationship, and I’m sure that, within a short period of time, things will be looking very rosy, we hope.” He added that, “That’s usually the case with the two of us. We get it worked out. We’ve had a lot of good — a lot of good things. We’ve done a lot of good things together, as partners. Our countries have been partners in many good ventures, including some having to do with radical Islam and others. And it’s always worked out. So I look forward to our discussion.”

In terms of NATO countries increasing their payments for US defense assistance, Trump said, “What I’m liking about NATO is that a lot of countries have stepped up, I think, really at my behest. And to — also, yourself, you’re close to the level. But they’ve stepped up and they’ve put up a lot of money. I told you, it was $130 million — $130 billion. And that’s a lot.”

He added that: “So NATO, which was really heading in the wrong direction three years ago — it was heading down. If you look at a graph, it was to a point where I don’t think they could have gone on much longer. Now it’s actually very strong and getting stronger. Many people are committed to that 2 percent. And ultimately, I think the 2 percent will be raised.”

Earlier on Tuesday, The Daily Mail of the UK reported that Labour leader and renowned anti-Semite, Jeremy Corbyn, was preparing to confront Trump at Buckingham Palace in response to the statement that the president made regarding Corbyn’s claims about the US wanting to seize the NHS.

Queen Elizabeth II had hosted a NATO reception at the palace and had the opportunity to chat with Trump and other world leaders. Currently, the palace is dealing with the media horror show over Prince Andrew’s alleged involvement with the late convicted pedophile Jeffrey Epstein and whether he had relations with a 17-year-old girl that was provided to him by Epstein.

Corbyn said that he was going to issue a warning to Trump that such public services as national heath were ‘not for sale.” The Daily Mail reported that the Labour leader’s threat comes despite the fact that Trump “moved to kill the veteran left-winger’s main election attack line by flatly dismissing the idea he wants a post-Brexit trade deal to open the health service to American companies and push up drugs prices.” 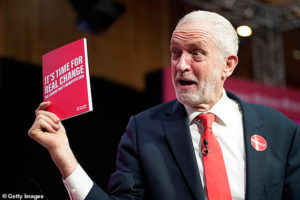 Speaking as he ran the gauntlet of a NATO summit in London, Trump insisted the US ‘wouldn’t touch the NHS if you gave it to us on a silver platter’.

The Daily Mail reported on Tuesday that a secret tape had emerged in which Corbyn expressed his wish that NATO no longer exist as a viable international political entity.

Back in 2014, Corbyn had said that he was ‘not a fan’ of the alliance that has helped keep Britain safe since the end of Second World War. The tape shows him at a 2014 rally outside the BBC.

The footage emerged as the Tories plan to focus on Corbyn’s stance on security matters.

As to the issue of anti-Semitism that follows Corbyn around, JNS reported that he said on Sunday that if his party controls Parliament in the United Kingdom following elections on Dec. 12, Israel would no longer receive arms from Great Britain.

Such a move would add to the leader’s and his party’s clear animosity towards and bias against the Jewish state.

“Labour’s new internationalism means we will create a peace and conflict-prevention fund and invest an extra 400 million pounds $513 million to expand our diplomatic capacity and increase oversight of arms exports to ensure we’re not fueling conflicts, as in Yemen and in Israel and the Palestinian territories,” he said in a speech outlining his party’s foreign-policy goals.

A recent poll found that 87 percent of British Jews consider Corbyn to be an anti-Semite.

New research makes it clear that Jeremy Corbyn’s most ardent supporters ‘more likely to be anti-Semitic’.

A YouGov poll found that more than one in three (35 per cent) of those who “strongly like” the Labour leader agreed with four or more statements deemed to be anti-Semitic, while 58 per cent held two more such views, reported the London Telegraph. “The proportion of ardent supporters of Nigel Farage, Boris Johnson and Jo Swinson who agreed with four or more of the statements was significantly less, at 24 per cent, 21 per cent and 18 per cent respectively.

Since 2015, Campaign Against Antisemitism has conducted annual research into the prevalence of antisemitism in Britain, and sentiment amongst British Jews, the group’s web site explains. “Every year, we commission the UK’s leading polling company, YouGov, to poll the British population about their attitudes towards Jewish people, and separately we work with polling professionals and partners within the Jewish community to carry our own poll of British Jews to determine how antisemitism affects them.”

On Saturday, Corbyn’s party released a new campaign video about minorities valued by the party and Jews were intentionally omitted, according to a JNS article.

In the clip, which claims that “diversity is our greatest strength,” Labour MP Dawn Butler gives a long list of communities the party will support, including those who wear “a hijab, turban, [or a] cross,” and people who “are black, white [or] Asian.” Butler says the groups mentioned are “worthy of equality, worthy of dignity and worthy of respect, and a Labour government will value you.”

Jews were the only group not mentioned, according to JNS.

Daniel Sugarman, public-affairs officer for the Board of Deputies of British Jews, responded to the campaign video, saying, “You’re a party being investigated by the Equality and Human Rights Commission over claims of institutional anti-Semitism. Your latest response is to release a video assuring pretty much every other group which faces discrimination that you’re here for them, but not Jews. Subtle.”