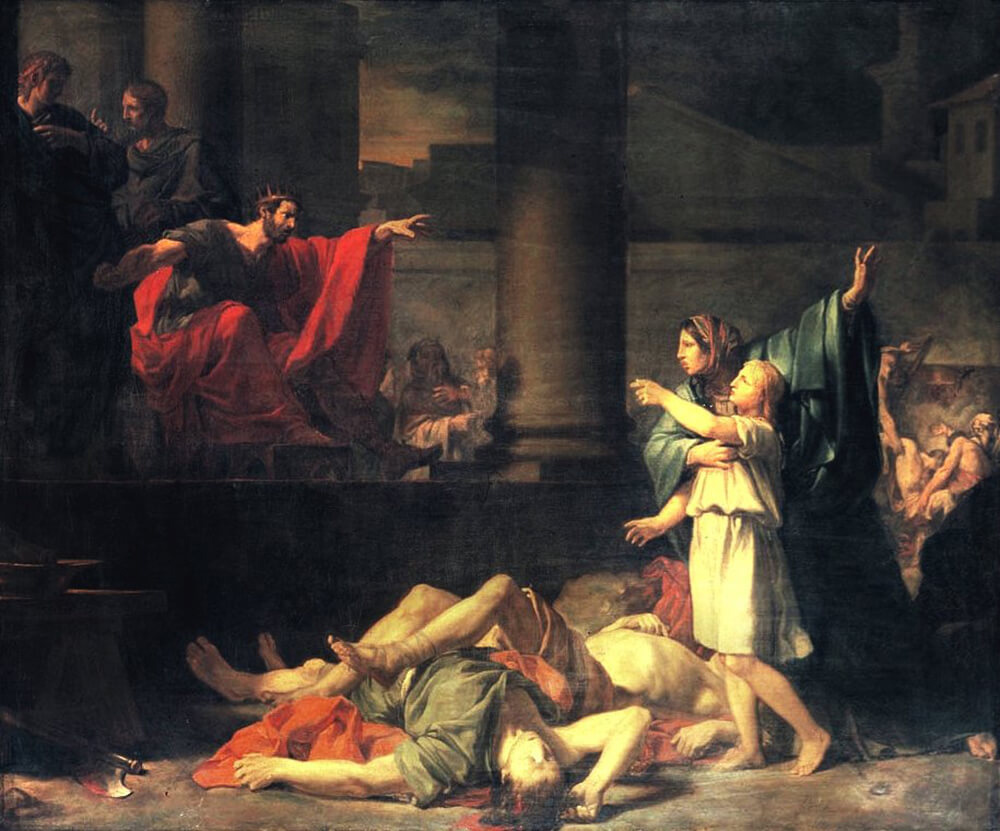 As if speaking to all seven children, Chanah said, "My children, tell your ancestor Abraham, 'You bound only one son upon an altar, but I bound seven." Photo Credit: Jean-Baptiste de Vignaly, 1781, Paris – Wikimedia

Antiochus was determined to enforce his vicious edicts upon the Jews, effectively destroying their attachment to the Torah. He forbade the observance of all religious laws; anyone found with a Torah would be executed; circumcision, kosher food, Shabbat, all vestiges of Judaism were outlawed. Phillip was appointed governor of Judea, and he set out to ruthlessly enforce the king’s edicts. He decided to begin his campaign with the arrest of the notable sage and High Priest, Elazar. Elazar thwarted Phillip’s design by choosing martyrdom over submission. Soon after, Chanah and her seven sons were arrested.

When the king, who was returning to Antioch, heard about the events which were taking place in Jerusalem, he decided to take an active role in enforcing his decrees. The mother and her sons were bound and brought before the king.

Antiochus tried to convince the eldest boy to abandon the Torah. The youth responded with great confidence, “Why do you bother with this long speech, trying to inflict your abominable religion upon us? We are ready to welcome death for the sake of our holy Torah!”

The king was furious and ordered the boy’s tongue, hands and feet severed and placed in a fire. The soldiers proceeded to torture the boy, forcing his mother and six brothers to watch his excruciating pain. Antiochus was sure that this sight would intimidate his prisoners into unquestioning submission.

Instead, the martyrdom spurred the family to a deep resolve to accept their fate and to sanctify G‑d’s name. When the second brother was brought to the king, even the members of the king’s retinue begged the boy to obey the king. The boy, however, replied, “Do what you will with me. I am no less than my brother in devotion to G‑d.” The second son’s torture was as bitter as his brother’s had been. As he died he told the king, “Woe to you, pitiless tyrant! Our souls go to G‑d. And when G‑d will awaken the dead and His martyred servants, we will live. But you—your soul will dwell in a place of eternal abhorrence!”

To the amazement of all, the third brother unflinchingly suffered the same fate. The fourth brother echoed his brothers’ exhortations, and faced his brutal death with firm resolve. Before he was killed, the fifth brother turned to Antiochus and said: “Don’t suppose that G‑d has handed us over to you to exalt you or because He hates us. It is because He loves us and has granted us this honor. G‑d will take His vengeance upon you and your progeny.”

The blood-lust of the king was not assuaged, and the sixth brother was brought to the same end as his brothers who preceded him. His words bespoke his deep faith that G‑d would ultimately requite the suffering of His servants.

Throughout this horrible sequence Chanah stood by her sons, giving them strength and encouragement. Now, only the youngest child remained to face the king. When they brought the boy, the king offered him gold and silver if he would do his will. The seven-year-old boy displayed the same courage as his brothers and taunted the king to carry out his threats.

The king couldn’t believe such words coming from a mere child, and he called out to Chanah. Chanah stood before the murderer of her children and listened to his words. “Woman, have compassion upon this child. Persuade him to do my will so that you will have at least one surviving child and you too will live.” She pretended to agree and asked to speak with her son.

When they stood together, Chanah kissed the boy, then said, “My son, I carried you in my body for nine months, I nursed you for two years and I have fed you until today. I have taught you to fear G‑d and uphold His Torah. See the heaven and the earth, the sea and the land, fire, water, wind and every other creation. Know that they were all created by G‑d’s word. He created man to serve Him and He will reward man for his deeds. The king knows he is condemned before G‑d. He thinks that if he convinces you, G‑d will have mercy on him. G‑d controls your life’s breath and can take your soul whenever He desires. If only I could see the greatness of your glorious place where we would be illuminated with G‑d’s light and rejoice and exult together.”

Chanah returned to the king, saying, “I was unable to prevail upon him.”

The exasperated king again addressed the child who answered him, “Whom are you seeking to overpower with your words and enticements? I laugh at your foolishness. I believe in the Torah and in G‑d Whom you blaspheme. You will remain an abomination upon all mankind, loathsome and far from G‑d.”

The king was enraged. According to the Talmud, Antiochus gave the boy a chance to save himself by ostensibly bowing down to retrieve his signet ring, but the boy refused. As they removed him, Chanah begged to kiss him one last time. As if speaking to all seven children, Chanah said, “My children, tell your ancestor Abraham, ‘You bound only one son upon an altar, but I bound seven.” Then Antiochus ordered that the child be tortured even more than his brothers.

Chanah was left surrounded by the bodies of her sons, a prayer exalting G‑d on her lips. Then the distraught woman threw herself from a roof and rested beside her martyred sons.