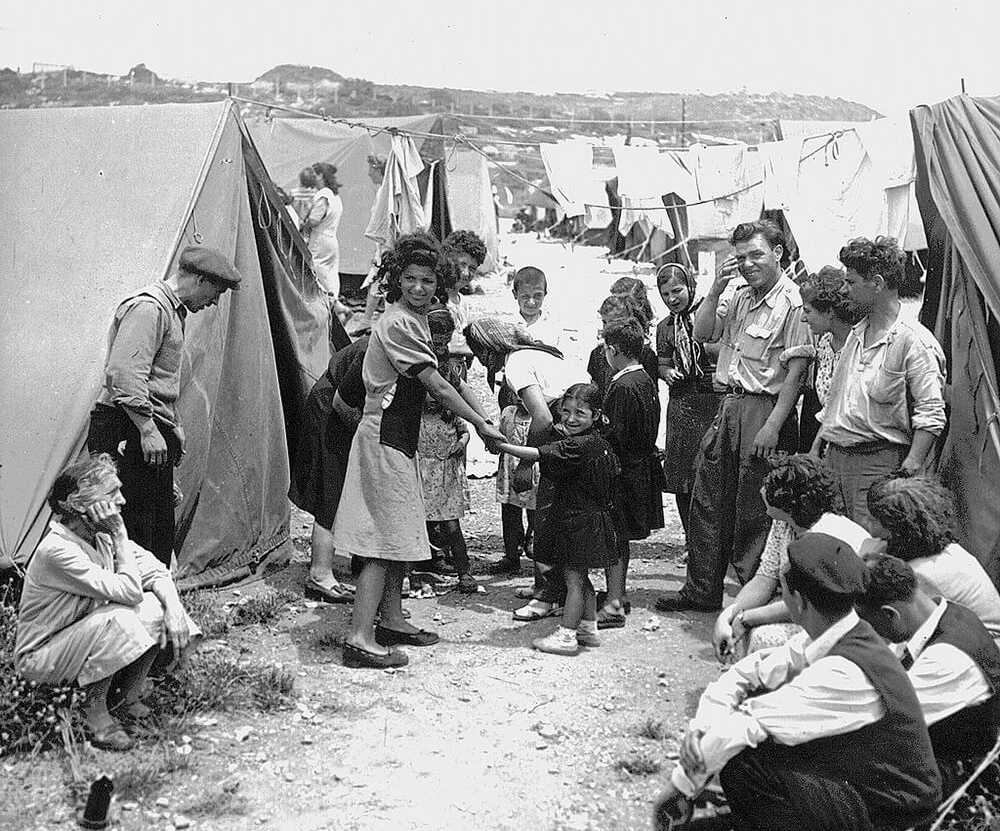 More than that, an effort is underway to recognize centuries of contributions of Jews in the Middle East and North Africa, and to foster relations for the future.

The nine young Iraqi Jewish men hanging in the center of Liberation Square in Baghdad in  January 1969 after being accused by the Ba’athist regime of espionage were the subject of great interest that day, as hundreds of thousands of Iraqis came to view their corpses—not only causing a terrific traffic jam in Baghdad, but also sowing deep fear throughout the millennia-old Jewish community there. Seven months later, three more Jews were executed. 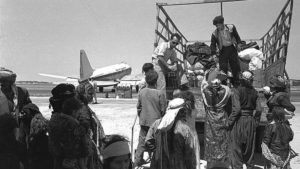 The horrific episode was part of the history of the estimated 1,000,000 Jews living in the Arab world and Iran who were forced to flee their ancient homes during the mid-20th century.

Few Jews remain in Arab countries and Iran; nevertheless, a new effort is underway to set a global day of commemoration to remember the Jewish communities throughout the Middle East, in addition to the graves that cannot be visited by family and for whom no one recites Kaddish, the Jewish prayer for mourning the dead.

In 2014, Israeli Knesset member Shimon Ohayon first introduced a law to make Nov. 30 the official day to recall the ordeals of Jews from Arab countries throughout the Middle East and North Africa.

On Nov. 29, 1947, the U.N. General Assembly adopted Resolution 181 recommending a partition of British Mandate Palestine, and called for a Jewish state and an Arab state, which the Jews accepted and the Arabs rejected. Immediately after the vote, the Arab countries turned on their Jewish populations, confiscating their businesses and stripping them of their rights, much like the Nuremberg laws of 1935. Many Jews were persecuted and murdered, and thousands were forced to flee their homes. For this reason, the next day, Nov. 30, was chosen as a day to remember.

This past weekend, more than 50 synagogues in the United States and Canada, as well as in the United Kingdom, France and Israel, all recited the prayer composed by Rabbi Joseph Dweck, senior rabbi of the Spanish-Portuguese community in London, in commemoration of the people who were persecuted, exiled or killed for being Jewish. Last year, only 12 synagogues participated in the effort; the initiative is clearly gaining traction. 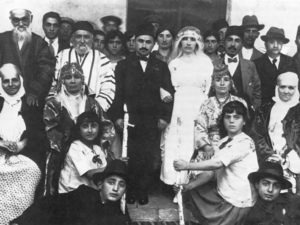 Jewish wedding in Baghdad, Iraq, where the Jews were an integral part of society. (Photo Credit: JIMENA-Jews Indigenous to the Middle East and North Africa)

Part of the text reads: “We have seen with pained hearts the murder of our brothers and sisters and the burning of our synagogues and our Torah scrolls by the hands of our Arab neighbors amongst whom we have dwelt for generations. … Lord full of mercy … give rest on the wings of the Divine Presence … to the souls of our brothers and sisters who died and who were murdered by the hands of cruel enemies in the Arab Lands. Our dwelling places became fiery furnaces and our friends turned to foes.”

In addition to the aspect of remembering those Jews whose stories have been forgotten, this effort simultaneously exposes the history of the Jews who lived in these lands long before the advent of Islam.

When Nebuchadnezzar captured Jerusalem and destroyed the First Temple in 586 BCE, he exiled many Jews to Babylon, what is today known as Iraq. Thus, Jews called Baghdad their home for more than 2,500 years.

Affirming the prominent Jewish presence there, a 1917 British intelligence document records that the Jews of Baghdad once comprised 40 percent of the population. Interestingly, the report insists on the validity of the numbers “in anticipation of racial claims which are sure to be made sooner or later.” Two years ago, a delegation of heads of Iraqi cultural organizations asked to meet with heads of the Jewish community of Iraq in London. They were impressed by how much success Iraqi Jews have had in the United Kingdom and asked why they can’t replicate their success in Iraq. 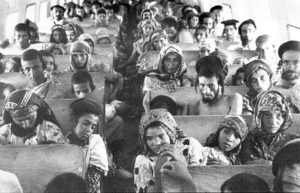 In his eloquent address at the day long seminar entitled, “The End of Jewish Communal Life in Arab Lands” held at the Center for Jewish History in Manhattan on Monday, December 2nd, Rabbi Eli Abadie, MD of the Sephardic synagogue in New York City, said:

“The issues surrounding the Palestinian refugees are frequently addressed at the UN, in the news media and in legal journals. Very little has been written about the Jews displaced from Arab lands. Out of almost 1120 UN resolutions on Israel and the so called Palestinians, almost 200 resolutions deal specifically with Palestinian refugees, by contrast, not a single one deals exclusively with Jewish refugees displaced from Arab lands.

“Jews were known as believers and as such were not given the choice to either adopt Islam or death, but they were given the third choice–that of submission. Therefore, coexistence between Jews and Muslims required that the Jews be submissive to the Muslims. This coexistence dated back from the time of Muhammad and his late successor Caliph Omar.

People subjected to Muslim rule were given protection from death and conversion as the Dhimmis. This protection required that the Dhimmis pay a poll tax known as Jiziya or fine. The Dhimmis were forbidden from testifying against Muslims, owning a home, holding office, bearing arms or drinking wine in public, they could not build their houses higher than Muslim houses, they could not ride on saddles, they could not display their Torah except in their synagogues, neither could they raise their voice when reading or blowing the Shofar, and were required to wear a special emblem on their clothes, yellow for Jews (the yellow star was not a Nazi invention). It was their duty to recognize the superiority of the Muslim and accord him honor.”

Rabbi Abadie also offered a multi-faceted plan for concretely addressing the crimes that were committed against Jews from Arab lands.

He said: “Asserting rights and redress for Jewish refugees is a legitimate call to recognize that Jewish refugees from Arab countries, as a matter of law and equity, possess the same rights as all other refugees.

The first injustice was the mass violation of the human and civil rights of Jews in Arab countries. 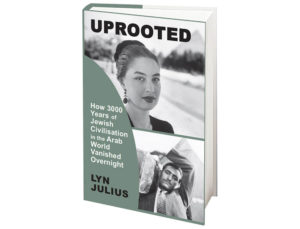 Who are the Jews from Arab countries? What were relations with Muslims like? What made Jews leave countries where they had been settled for thousands of years? What lessons can we learn from the mass exodus of minorities from the Middle East? Lyn Julius undertakes to answer all these questions and more in Uprooted, the culmination of ten years of work studying these issues. Jews lived continuously in the Middle East and North Africa for almost 3,000 years. Photo Credit: Association of Jews from the Middle East and Africa

Today, we must not allow a second injustice – for the international community to continue to recognize rights for one victim population – Arab refugees–without recognizing equal rights for other victims of that very same Middle East conflict – Jewish refugees from Arab countries.”

On Tuesday, Israeli UN Ambassador Danny Danon told the General Assembly that he plans to propose a resolution about what he called “the ‘forgotten’ Jewish refugees” to counter the blatant one-sided focus on Palestinian refugees.

“We don’t hear the international community speak of them when they discuss the refugees of the conflict, perhaps because it doesn’t serve the Palestinian narrative,” Danon said.

According to an AP report, Danon didn’t detail his planned resolution, except to say that it would “acknowledge the wrong done” to the Jews in question and “make right the injustice that they suffered.”

Danon’s remarks came as the assembly weighed a draft resolution reiterating a roster of longstanding positions on the Israeli-Palestinian issue. The proposed measure includes calls for continued humanitarian and economic aid to the Palestinians and a stop to Israeli settlement of areas Israel captured in the 1967 Mideast war — a stance given new resonance by the recent U.S. announcement that it no longer believes the settlements violate international law, as was reported by the AP.