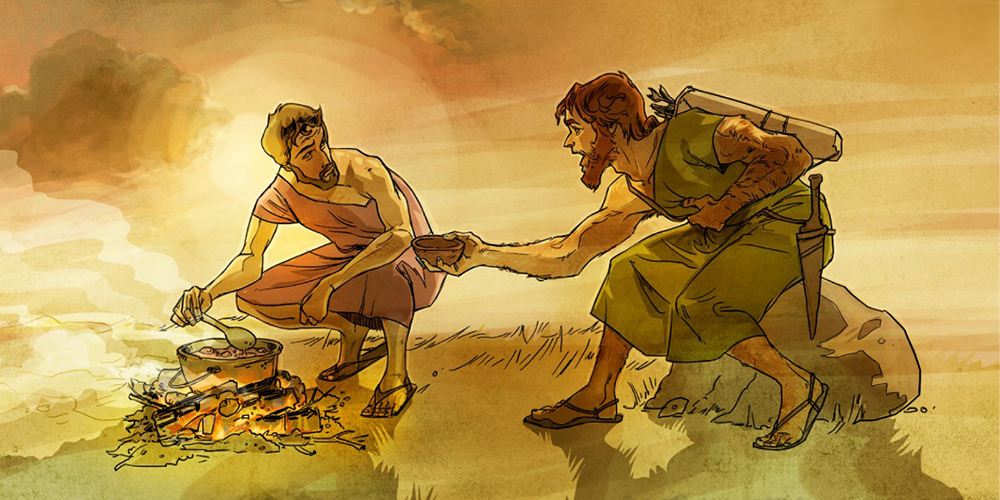 We can now understand several other perplexing stories surrounding Esav's life. In this week's parsha, the Torah describes the development of Yaakov and Esav and their respective personalities. Yaakov was a spiritual and pure individual, who dwelt in the tents (of Torah), whereas Esav was a man of the field, a hunter.

An older couple sat together on the train, quietly chatting as they rode through the countryside. Their peace was suddenly disturbed by a fully grown boy sitting across from them. “Dad, look!” The boy exclaimed to his father. “The trees are going past us!” The boy must have been almost twenty years old and had a huge smile glued to his face. His father smiled along, almost as if encouraging his outburst. The couple looked at the boy’s childish behavior with a pitiful glance, before going back to their conversation. Suddenly, the boy erupted with excitement again and shouted, “Dad, look at the clouds running along with us in the sky!”

At this point, the couple could not resist, and the wife went quietly over to the boy’s father. “Why don’t you take your son to a good doctor and get him some help?” she whispered. The old man smiled and said, “As a matter of fact, I did. We are actually returning from the hospital right now. My son has been blind since birth, and today is the first time he is experiencing the gift of sight. Wouldn’t you be just as excited?” 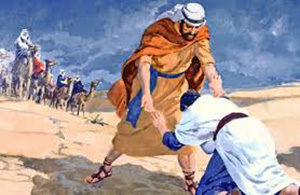 Each and every person in this world has a story, one much deeper than a surface glance portrays. Similarly, every object and occurrence in the physical world is laced with layers of depth and meaning. We must choose to peer beyond the surface in order to tease out these layers. This week’s parsha, Toldos, is replete with fascinating, multilayered episodes. Let us take a deeper look at one such example.

In this week’s parsha, Rivka Imeinu gives birth to Yaakov and Eisav. Her pregnancy is extremely difficult, with the two fetuses struggling violently within her. Rashi (Bereishis 25:22) brings down the famous midrash, which describes the battle that transpired between Yaakov and Eisav in the womb. Whenever their mother, Rivka, passed a place of Torah study, Yaakov was drawn towards it, and when she passed a house of idol worship, Eisav was drawn towards it. Yaakov desired the spiritual and Olam Habah- the World to Come, while Esav desired the physical and Olam Hazeh, the physical world. This was the cosmic battle that took place within Rivka’s womb.

The problem with this “battle”, however, is quite obvious. If Yaakov wanted the spiritual, and Esav desired the physical, where is the point of contention? This is not a battle- they can simply each take what they desire, without any need for argument or disagreement. There’s nothing to fight over.

For example, if there are two cups of ice cream, chocolate and vanilla, and one sibling wants chocolate while the other craves vanilla, then surely there is no argument! They are actually in agreement- each can simply take what they desire. An argument would arise only if there was one cup of ice cream and they both want it. What, then, what was the fight between Yaakov and Esav about?

In order to understand the depth of this battle, we must understand the concepts of ikar and tafel, the essence (ikar) and the enabler of that essence (tafel). “Ikar” is the inner essence and the main entity; the tafel is what enables the ikar to flourish. For example, the ikar of an orange is the inner fruit while the peel is the tafel, as it enables and protects the fruit. The same principle applies to a person; the ikar of a person is the neshama, the self, the mind and soul. The body is the tafel, as it is what enables the soul to exist in this world, to learn, grow, and expand. This is the ideal relationship between the spiritual and physical world. The physical world is meant to reflect and illuminate the physical.

The ideal is for the tafel (that which is secondary and lower) to perfectly and loyally reflect the ikar (the inner spiritual essence), for the body to loyally reflect the truth and depth of the soul, for the physical to be a loyal vessel, fully reflecting its spiritual root. The body is meant to be the vehicle which carries the soul though the world. We don’t believe in rejecting the physical, but we don’t wish to get stuck in the physical either. The goal is a beautiful but nuanced balance, where the physical is used to reflect something higher, the spiritual. In this perfect balance, the wisdom and ideas of Torah become one with you, and you express that inner depth through the physical. This is why almost all the mitzvos are done through physical actions! And this was the very battle between Yaakov and Esav, a battle of perception, a battle of ikar versus tafel.

In truth, both Yaakov and Esav wanted both the spiritual and the physical, and this was the root of their battle. Yaakov wanted to use the physical as a vehicle for the spiritual, as a tool to fully utilize and actualize spiritual potential. Esav, on the other hand, merely wanted to use the animation of the spirit and soul to enable him to experience the pleasures of the physical. In other words, Esav flipped the ikar and tafel; he viewed the physical as ikar (main) and the spiritual as tafel (secondary), a necessary means towards experiencing the physical world. Esav did not wish to use the physical to reflect anything higher than his own selfish desires. Imagine a computer screen that blocked the image you wanted to see, and projected itself in its place; imagine a projector that didn’t project the film, but instead projected itself. This is what Esav tried to do, to project himself and his own ego instead of reflecting something higher.

We can now understand several other perplexing stories surrounding Esav’s life. In this week’s parsha, the Torah describes the development of Yaakov and Esav and their respective personalities. Yaakov was a spiritual and pure individual, who dwelt in the tents (of Torah), whereas Esav was a man of the field, a hunter. Rashi (Breishit 25:27) quotes the midrash explaining that Esav was not only a literal hunter and trapper, but he was also guilty of ensnaring Yitzchak’s consciousness by convincing him of his alleged spiritual greatness. How did he accomplish this feat? Esav asked Yitzchak how to tithe (take ma’aser from) salt and straw, leading his father to believe him to be scrupulously careful with the mitzvot. [This question was particularly relevant for Yitzchak, as Chazal explain that Yitzchak introduced the mitzvah of ma’aser to the world.]

While Yitzchak was impressed with Esav’s apparent halachic stringency, Esav was in fact portraying his own twisted ideology. Straw and salt have a prominent characteristic in common: They are both tafel. Straw is the casing and protection for wheat; alone, it is worthless. Salt is similar. Anyone who cooks know that salt itself is not meant to be tasted or expressed. It is the tafel, the enabler, of the food, helping bring out its taste and flavor (as opposed to condiments such as ketchup and mustard, which are themselves meant to be tasted).

In asking how to tithe straw and salt, emphasizing that which is tafel, Esav projected his own corrupted worldview. He essentially claimed that the tafel–salt and straw–deserve attention as the main focus, as the ikar. This was his view towards the physical and spiritual as a whole: Esav sought to turn the tafel, the physical, into the ikar. He placed the physical world as the center and main focus of life, with the spiritual simply serving to enable its pursuit. While Yaakov saw the physical body as his mechanism to carry his spiritual soul through this world and live a spiritual life, Esav saw the soul as merely a way to animate his physical body and allow him to enjoy this physical world.

This is perhaps why in sefer Ovadyah, Esav is compared to a nation of straw. Esav, and Edom, are a nation drowned within the world of tafel and physicality. This is also why the Maharal compares Esav to a pig: a pig appears kosher on the outside, due to its split hooves, but in truth, on the inside, it’s completely treif (as it doesn’t chew its cud). So too, Esav pretended to be a tzaddik on the outside, putting on a show for Yitzchak, but on the inside, he was twisted and corrupt.

Based on the ideas we have developed, we can conclude by explaining why Eisav sold the bechora (rights of the firstborn) to Yaakov in this week’s parsha. Immediately after his grandfather, Avraham Avinu, passed away, Eisav sold the bechora to Yaakov. The pasuk states that Eisav despised the bechorah, proclaiming that he would eventually die anyways, and therefore had no need for it. What is the meaning behind Eisav’s feelings towards the bechora, and why does he sell it specifically after Avraham passes away?

The answer to these questions is profound. The bechora is a spiritual inheritance. It grants the right to serve in the Beis HaMikdash, to live with a higher purpose, to be rooted in a higher world–things which mean nothing to Esav. Esav lives a physical, finite existence, in this immediate world. To him, there is no life after death, nothing beyond this fleeting, limited life.

Furthermore, the bechora is a spiritual inheritance that his children would receive. In Esav’s eyes, though, his death meant the end of his existence, as he doesn’t believe in an eternal spiritual afterlife. What his children receive means nothing to him. Sensory experience is the only currency Esav is interested in. With no deeper roots, Eisav’s entire existence is invested in this physical world.

When he experienced Avraham’s death, he was reminded of his own fate, as he saw it, according to his own philosophy. Therefore, in his own eyes, the bechora became worthless to him. Only that which he can experience in the physical world has any value, which is why he exchanges the bechora for a bowl of food- eternal spiritual significance in exchange for fleeting bodily pleasure.

This is the deep lesson that Yaakov teaches us: the power of perception, the responsibility to build deeper and more empowering perceptions of the world. The physical is not an ends in itself- it is meant to serve as a vehicle for transcendent, spiritual, conscious living. This is the battle we face on a daily basis, a battle of perception. We need to choose to peer beneath the surface. Just like the boy who was suddenly given sight, each day we must choose to see with “new eyes,” recognizing that while yesterday we were blind, today, we can finally see.